The smell of pest is everywhere! 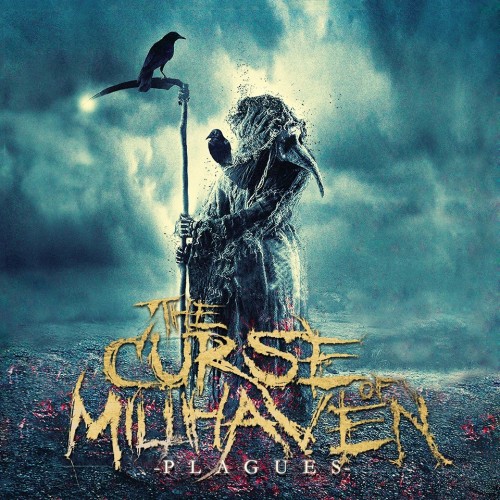 In 2015 I met the old school death metal band the Curse Of Millhaven and bought their debut album Vestibule Of Hell. I enjoyed it a lot and it became one of my first album reviews. Last year the guys from Ypres confirmed to me that they were working on new material and now they’ve given me the chance to shred Plagues, their latest EP. Doctor! Get the pills ready, I must shred this little pest!

Plagues is the second release from the Ypres based death metal band the Curse Of Millhaven, succeeding their 2014 debut Vestibule Of Hell, once again released independently. Vestibule was an enjoyable release and this one is no exception, but the guys from Ypres did change some elements of their sound for Plagues. Let’s start with Jasper’s vocals. Unlike Vestibule where he mostly used cheesy death metal grunts, in Plagues he employs bone chilling shrieks that feel desperate, aggressive, determined and overall very powerful. Personally, I believe this harsh vocal style fits him better compared to how he sang in Vestibule. He sounds angrier and rawer, like a cobra slithering towards you in order to bite you with his venomous teeth. Another difference is that the songs on Plagues feel more unique compared to Vestibule. Tracks like Bringer of Disease, The Infection and Left In Stench, have a modern death metal style with consistently fast guitar and drum beats. On the other hand, Black Death and the title track are more old school with slower melodies, sudden tempo changes and epic guitar solos, similar to the material they had made for their first release. In addition, Plagues’ songs have a clear beginning and ending unlike the Vestibule album which felt like one long, continuous song split into several tracks. All things considered, Plagues feels significantly heavier and faster than its predecessor. There isn’t much room to breathe as the Curse Of Millhaven slice their way through your eardrums with these five tracks of death metal ferocity.

The EP’s title says it all. It’s all about the pain, suffering and death caused by pestilence. Every song on Plagues takes place in a setting torn apart by disease, causing the world to fall into chaos and despair. Infested bodies keep on piling up, blood and vomit flow through the streets and black poisonous clouds cover the sky. The third track, the Infection, is particularly gruesome, as it is sung from the perspective of a man dying from a horrible illness causing him to puke blood and becoming insane by the pain he’s going through. Lovely!

On the front cover we see Pestilence, one of the Four Horsemen of the Apocalypse, holding with a scythe (probably borrowed from his Horseman colleague Death) and standing in a barren landscape surrounded by greenish, poisonous clouds. A nice image, but I kind of wished to see him standing in a city struck by a plague and causing the streets to be filled with bodies and people running in fear. It would’ve looked awesome!

My two favorites on the EP are Black Death and Plagues’ title track. Black Death has a long, epic guitar solo that beautifully contrasts the brutal energy the band shows off in this album while the title track is a perfect showcase of every band member’s individual strengths. Starting off with a moody guitar riff that gets quickly joined by a pounding drum beat before the rest of band tags in to go for one last dance. And after unleashing all the rage inside of them, all band members began falling away until all that remains is that same guitar riff from the beginning of the track. It’s a badass and atmospheric final tune before everything dies from the Plagues.

There isn’t a track I would consider inferior to the rest of the set, but I wished the EP were a bit longer. After a mere 19 minutes the Plagues ride is over and I’m left wanting more of that filthy content. I would’ve loved a little instrumental track similar to the beautiful tune Reditus which wrapped up the Vestibule album. Anyway, we can’t get everything in life, I guess?

8 plague masks out of 10. A worthy successor to their debut release, the Curse Of Millhaven’s latest EP shows a clear evolution in the band’s sound with a more suitable vocal style, more musical variety and overall more refined yet at the same time more barbaric songs. I can warmly recommend both Plagues and its great predecessor to every death metal fan out there! Now allow me to smell the stench of pestilence!