Snakes on a planet! 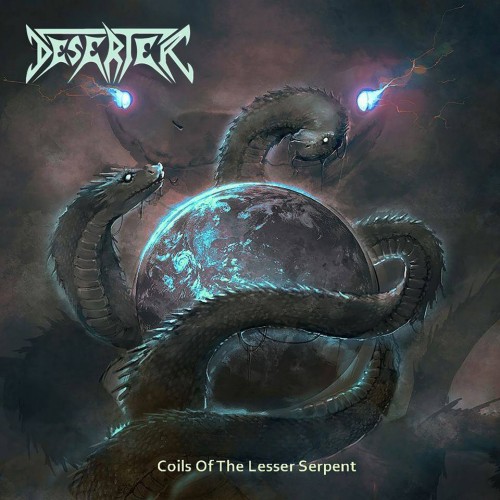 I first met Deserter in Spring 2015 during a punk and metal crossover festival in Aalst called Öiljst Öntplöft. I remember being very pleased with their performance. Now, two years later, the band has released a new album and it’s about time that I shred this snake’s skin because I really need some new shoes!

Distributed by Vile Records, Coils of the Lesser Serpent is Deserter’s second full release and succeeds their 2012 debut album Chernobyl’s Beauty. I also own Chernobyl’s Beauty but the less we talk about that piece of bootlegged crap the better. This time, the guys of Deserter had the time and resources to crank out an album worthy of being called a debut release. The band’s overall style combines the frantic pace from acts like Exodus with riffs similar to bands like Death. One unique thing about Deserter are the vocals. Unlike the aforementioned artists where Deserter clearly takes inspiration from, Yacine goes all black metal on your ass! He yells and shrieks his way through the album. Say what you will about black metal and its vocal style, but I dig the subgenre and I believe this sort of “singing” adds to the raw atmosphere of Coils of the Lesser Serpent. The album isn’t very long and moves at a fast pace, barely leaving you time to breathe during its 30 minute frenzy of epic guitar solos and mosh inducing drum beats. Overall, what you get here is a nice package of thrashing black death!

Warfare and political hypocrisy are the main themes discussed in this album. It’s the typical thrash metal topics criticizing the atrocities of modern day life. I don’t think there’s much more I can tell about Coils Of The Lesser Serpent’s themes. Moving on…

On the front cover a pair of snakes give our planet a good, warm hug. Maybe this image is a visual metaphor about how governments seemingly hold the entire planet into their grasp using the fear-inducing media and waging war in other countries. The artwork has a soft, hand colored look and it looks great. Another upgrade from the band’s previous release. You know, the more I look at that cover art the more I start thinking about the poster of the infamous action thriller Snakes on a Plane starring Samuel L. Jackson. Damn, I’ve had it with these muthafucking snakes on this muthafucking planet!

Without a doubt Bombing Flight. The song starts off strong with a badass guitar riff and then pounds its way into your eardrums with a frenzy of guitar riffs and ferocious vocals, nicely showcasing Deserter’s strengths. A great introduction to the band’s experimental cocktail of thrash, black and death metal. Too bad it isn’t Coils Of The Lesser Serpent’s actual opening tune. More on that right now…

The album’s second track, Urban Gehenna, was an unnecessary track in my opinion. This instrumental track is put right after the opening track, which is also an instrumental, but it doesn’t provide any further warming up for the meat of the album. I wished songs like Head Hunter or the aforementioned Bombing Flight had the second spot on the album. Those are two songs that really put the album into high gear! Still, Urban Gehenna does have a few nice guitar solos so the track isn’t all filler.

7 serpent coils out of 10. While Coils of the Lesser Serpent isn’t Deserter’s official debut album, it certainly deserves that title. With better, more technical sound writing, more appealing artwork and, let’s not forget, a huge improvement in production values, Deserter has managed to put the power and energy they give off during their live shows into a well-made album. With Coils Of The Lesser Serpent, Deserter show that they’re a band with great potential. I look forward to the band’s future releases, but first, I really need to see them play live again. It’s been so long and I’ve got a name to shred off my list!

Unfortunately, I couldn't find the album's single Carnal Carnival on YouTube. However, you can listen to the track on Spotify using this link: https://open.spotify.com/album/6p4jQwBL49xh0YN3Vz1hXL?play=true&utm_source=open.spotify.com&utm_medi...