I do dig on swine! 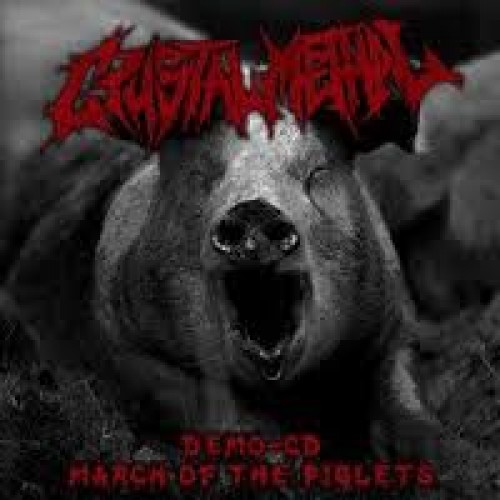 Unlike pretty much every other Belgian band I’ve already covered on my site, I didn’t meet Crystal Methal on stage or on record but rather in person. I'd had known Stijn, the band’s guitarist, for a few months before I eventually saw Crystal Methal in action in August this year. They were the first band on the roster that day and they nicely warmed us up for the other great metal offered by the likes of TurboWarrior of Steel, Speed Queen, Mind Patrol and others! Hell, they even managed to successfully improvise for over fifteen minutes without anyone realizing it! And now, Crystal Methal have released their first demo which you can find right below the tagline in case your scrolling went out of control.

I’d describe Crystal Methal’s sound in March of the Piglets as a combination of death metal’s vocals with the speed and rawness of thrash. Being a fan of these two subgenres, I already can have an appreciation for this band’s style of work. The demo has four songs, for about fourteen minutes of music. The band’s aforementioned style does go through a gradual change in pace as the demo goes on, as the first song feels very like thrash metal while the final track is slower and moves more towards death metal territory.

[THE PARK OF THEMES + THE VISION OF DEVASTATION]

The demo’s cover art is a pig, squealing towards the camera, implying that Crystal Methal's sound is well suited to get yourself slamming your body through a muddy mosh pit. I like how certain bands have the balls to change things around by singing about stuff you wouldn’t expect a metal song to be about.

The title track, which opens up the demo, stands head and shoulders above the rest. It has a very catchy guitar riff and an agitating pace. The other songs are listenable, but aren’t very memorable overall.

The demo itself gets a tasty 6 pork chop sandwiches out of 10. Judging from what I’ve heard from Crystal Methal so far, I can definitely see potential in the band but I can also feel that they’re still trying things out to see what suits them best. I would advise them to add some guitar solos into the mix since Stijn would certainly be able to yank out a few awesome ones as the demo’s title track has hinted to me.

When it comes to lyrics and vocals, I’d say that Tom should add some more aggression and anger to his vocals. It feels a little phoned in at times. Maybe singing in the style of Slayer or Pantera fits his vocal cords better. The bass and drums are very solid and I wouldn’t change anything about these two aspects.

Speaking about pace, I’ll suggest they’ll keep things fast, like in a traditional thrash metal band. March of the Piglets’ title track’s rapid and energetic speed is one of the reasons why I love that track.

Well, that’s all I’ve got to say about the demo! And now it’s up to you to decide whether to join in the mud splattering pit.

And so here it is, the full demo of March of the Piglets.