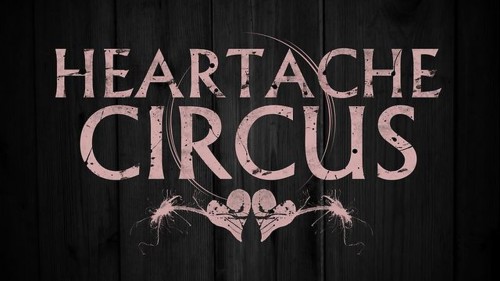 Heartache Circus was one of the five bands who competed in the Black Out Jam competition in April 2016. They were the first band on the list to play that evening, squaring off against other upcoming Belgian bands such as Source of Anguish, Shrouded, Moonsurface and Hope Erodes, the latter of which eventually became the winner.

After Heartache Circus had finished, I went to talk to the band's frontman Serge and introduced my webzine to him. Later on I received a stylish promo package which included an USB card in the shape of a golden ticket featuring band photos and their self-titled debut EP. Thanks, guys!

Over the course of the EP, Heartache Circus combines the bread-and-butter combination of heavy guitar and drums riffs with electronics, synthesizers and orchestral instruments such as violin in the second track, Guilt Trip Deluxe.

The atmosphere in the EP's four songs also changes as its tracks progress. The first tune, Rest for your Life, is very upbeat while the later songs feel darker and heavier. Serge's vocals also change. In those later tracks, there's more melancholy in his voice while in the first track he sings more energetically, inviting you to enter the Heartache Circus and enjoy the ride!

The electronics and keyboards add a nice touch of mystery to the music, implying to how little we know about the actual circus industry.

The name of the band says it all. It's about a circus. The opening track, Rest for Your Life, shows the circus from the perspective of the visitor, witnessing the spectacle and seemingly endless joy that you expect from a typical circus show.

However, the other three songs on the EP deal with what happens behind the scenes. And things aren't as happy or colorful as they are on stage. Drug abuse, depression and looming insanity are the main subjects in these final three songs.

Not much to cover here. I've received the EP in a sleek promo package with included the EP via USB in the shape of golden ticket and a postcard. Should you get the EP from the band themselves you'll get a basic sleeve decorated with the band's emblem and the disc itself with shows a picture of the band members in full circus outfit.

Rest for Your Life. It's such a fun, catchy tune and it gets me pumped to listen to the EP's other tracks as every self-respecting opening song should be. Every time I listen to this song, I image myself entering a circus with balloons and acrobats flying through the sky, sexy fire breathing girls, lions, elephants and of course clowns.

7 gold-plated tickets out of ten! A nice first entry from these clowns. And no, that's not an insult, they really dress as clowns when they perform. A band well worth checking out if you like solid heavy metal and don't mind a few bit of electro added to the mix.

Thanks for the ticket, folks! I'll be redeeming it soon!

Here the EP's excellent opening track: Rest of your Life.