Greek mythology hasn't been this fun since God of War! 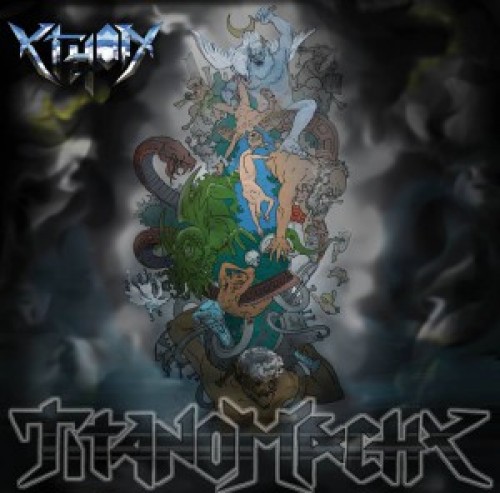 A freshly released independent release sent to me by Hard Life Promotion. Not much else to say expect me cranking a big smile on my face and whispering thank you to the band and HLP for providing me with another very descent piece of metal goodness. So keep them coming, folks!

Titanomachy is the debut full-length release of the Antwerp based heavy metal band Ython. Its eight tracks offer you a healthy variety of metal styles and themes. It starts off with a fun, traditional heavy metal based opening track called Kronos and Zeus featuring epic riffs and some powerful vocals by Walla. However, the succeeding track, Black Shield Nymph, takes things to a darker and heavier level and they even added quest female vocals to make the difference between the preceding track even bigger.

I was quite surprised by this sudden change in style. Then Ython ejects some speed metal into the mix for the album’s third track (Bit by the Iron Snake) and so the band swiftly switches styles and paces for the rest of Titanomachy and eventually they wrap it all up with death metal. Personally I think the faster tracks are better because I feel the guys play more robustly and with more confidence when they crank up the speed.

In addition to Walla, Ignace also gives vocals of his own for some songs on the album, with the songs Bit by the Iron Snake and Chuthlu Fhtagn in particular providing great chemistry between Walla’s high pitched, moaning vocals and Ignace’s demonic grunts. I hope that for their following releases, they expand on this style of dual vocals.

Greek mythology is one of the main lyrical ingredients for Titanomachy. The war between Olympus and the Titans, Prometeus stealing the heavenly fire from the gods and Atlas holding the weight of the world on his shoulders are some of the stories told through the album’s songs. In addition, the guys from Ython also give us a taste of H.P. Lovecraft with Chtulhu making a cameo appearance in the album’s final song.

The front cover of Titanomachy features characters from various Western mythos duking it out with one another on top of an orb carried by the titan Atlas himself! I guess it’s not just us headbangers who love the thrill of a good old bonecrushing mosh pit! Every creature on the cover has a song dedicated to them. I do feel a bit sorry for the winged angel (or demon) whose nutsack is being painfully squeezed to a semen soaked mess by Prometheus. Ouch! Anyway, I find it a fun cover to look at. I wouldn’t mind buying a king-sized poster of it and paste it on the front door of my bedroom. That way people know that things might get a bit messy in my own little lair.

The album’s final track, Chtulhu Fhtagn, takes the crown. It’s the only death metal styled track on the album and has Walla and Ignace taking turns behind the microphone giving the song great diversity. Eventually they work together to yell Chtulhu in a pretty mesmerizing way.

I already mentioned Bit by the Iron Snake in an earlier part of the review and that song gave me plenty of headbanging satisfaction. The track begins rather slow and relaxed but once the chorus kicks in, things suddenly get faster and more aggressive. It’s that kind of surprises that make songs more memorable to me.

7,5 Titan-devoured babies out of 10. Overall, Ython’s Titanomachy is an enjoyable romp of Belgian made metal with enough variety in it that you can find at least a few songs that will stick in your head for a considerable amount of time. As with many bands, Ython doesn’t attempt to reinvent the metal wheel, but they did give me a good time with this album. And I believe that they’ll do the same to you!