Bark at the Moon! 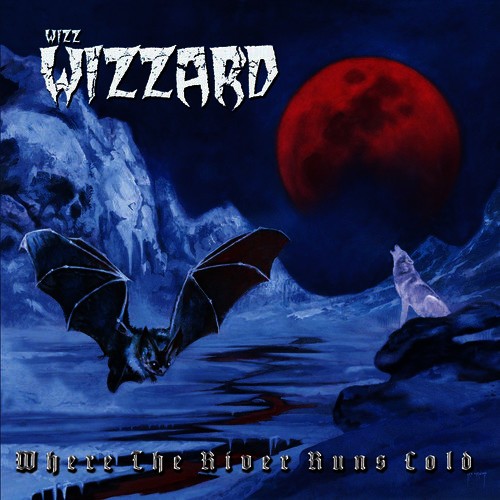 My first taste of Wizz Wizzard and its band’s charismatic frontman Wizz Beauprez was during Summerrock 2015. I saw the band perform and immediately decided to buy their 2013 full-length release Tears from the Moon and had it autographed (as always, of course). Tears was a fun album, and I was eagerly waiting for more. And more came this month when the band released Where the River runs cold. However, the highly anticipated release of this album was overshadowed by the news that Wizz was diagnosed with cancer. But while we’re waiting for him to get back on stage, let’s dive into this river, right at the spot where it runs cold!

If I’ve got to use a single term to describe Wizz Wizzard’s sound, it’s old-school. Take any random song from any random classic 70s or 80s metal band and you know what to expect. Sharp riffs that dominate the tracks, with each song telling its story through three verses and a chorus and with a technical guitar solo to put the icing on the cake! Ok, that sounds repetitive on paper, but every song does feel unique. The opening track, Crucified, has a Motörhead speed metal vide to it. Road to Walhalla sounds similar to something that Hammerfall would write and Wonders of the World reminds me of the legendary Led Zeppelin song Kashmir (that guitar riff feels so majestic and familiar). Overall, the songs remain consistent in quality. I’m sure you’ll be banging your head with ease by the rhythm on the drums or singing along with Wizz’s wolf-howling vocals.

Many songs on the album are dark fantasy themed with vampires, werewolves and other creatures of the night put into the mix. Other songs like Road to Walhalla and Live or Die, give a more combative and positive message to the listener. And finally there’s the track Rock Lives On, a genuine celebration of the rock n’ roll genre. And sung by a man who was born in 1905 (at least according to his Facebook profile), it proves once and for all that you’re never too old to rock!

Similarly to its predecessor, Where the River runs cold once again features an arctic landscape with a giant bat flying towards the camera! In the background we can see a silver colored wolf howling towards the blood red moon and the mountains on the left even have a skull engraved into them. Oh yes, my childhood memories of playing Castlevania on the Game Boy kick in! Overall, it’s a really artistic cover, more colorful and detailed than the one from the Tears album. A good visual representation of how the band has evolved over the past three years both visually and musically.

River’s fourth track, The Wolf, comes out on top. I love the contrast between the joyful guitar riff (which sounds similar to the Ozzy Osbourne’s classic Crazy Train) and the dark story this song tells (which is about a werewolf slaughtering everything he comes across). Live or Die is another favorite of mine. The song has motivating lyrics and the heart pumping guitars and drums add to the song’s get-up-and-fight atmosphere. In fact, the track could easily be used for a Rocky-style training montage! Eye of the Tiger!

8,5 bloodmoons out of 10! Wizz Wizzard’s Where the River runs cold isn’t the most original album you’re going to find, but that doesn’t matter. If you’re looking for eleven tracks of excellent heavy metal music that could’ve come straight from the 70s or 80s, than this album is an obligatory one to listen to! And Wizz, I hope you’ll be getting well sooner rather than later, we still need to have a chat with each other. You know, Shredder to Wizzard!

Enjoy the music video for Crucified, the opening track of Where the River runs cold.