Turbo is their name, and thrashing is their game! 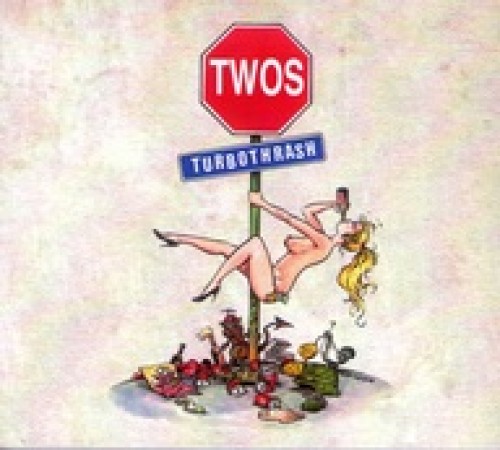 I first saw Turbowarrior of Steel during Paul’s Metal Fest in Kortrijk in August 2015. The guys from the Westhoek region of Flanders gave such a thrilling performance that everyone (me included, of course) began moshing all over the packed place as soon as the first note was played! As a gift for the interview I had with them that same night, the guys gave me this EP as well as a T-shirt with the same awesome cover as on this little gem. I actually paid them for the album as a means of respect and support for their act. And trust me, they fucking deserve it!

Turbotrash is TWOS’ debut EP and consists of five hard-hitting tracks. The band truly lives up to the turbo in their name as they play lightning fast, similar in pace to classic thrashers such as Slayer and Overkill as well as more recent bands like Distillator and Dr. Living Dead. In other words, an ideal tune to start up a mosh pit! However, like those aforementioned examples, TWOS manage to make their songs both barbarically aggressive and technically razor-sharp at the same time. Jonas’ catchy guitar riffs, combined with the pulse pounding drums and bass of Jorg and Gianni respectively make every song stick in your head for a very long time. Jonas also takes care of the vocal department and his vocal range is excellent, managing to do both low grunting (Polonaise Pit) and banshee screaming (the Hydra). Like all great thrash metal vocalists, he sings very fast and energetically, giving every song even more pepper!

Unlike most thrash metal bands, TWOS leaves depressive subjects like war, death and corruption well and far behind them! In fact, their lyrics are about simple heavy metal things like drinking beer, having fun with girls and friends and moshing your socks off! I’d say that their lyrics are inspired by similar songs written by Tankard and Mötley Crüe. So overall, Turbotrash offers quite unusual lyrics for the throat ripping brutality of thrash.

That same mentality of “forget about your troubles and have fun living life” is also present in Turbothrash’s artwork. The front cover features a cartoon image of a topless stripper pole dancing around a traffic sign while drinking beer. The inside cover has a nice set of pictures of the band members hanging around with friends and having great fun while doing it. The back cover shows the guys doing a little polonaise while drinking beer (as always). The artwork is basic and shows that the band doesn’t take itself too seriously.

A tough one to decide, but I’ll go with the EP’s opening track: Polonaise Pit. It has an awesome, catchy guitar riff, even catchier lyrics and the song is perfectly paced, making the faster parts of the track all the more intense! A perfect introduction to TWOS’ sound. As for the runner-up, pretty much everything else on the disc. Nuff’ said!

8,5 blonde topless booze drinking chicks out of 10! Don’t let yourself be fooled by TWOS’s laidback attitude as behind all the beer drinking, chick spanking and partying lies a very talented band whose first outing is just a little taste of their true potential. Now drink your beer and raise your fist and bang your hand to the Turbotwist!