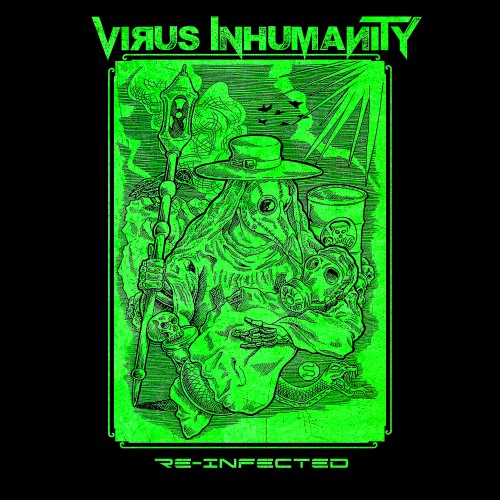 Ok, ... do you like to make something new out of something old? You like to recycle? We are in the middle of it but at a stratospheric level ! Here is an album which smells good the reappropriation or the improvement! I will tell you more in a few lines.
In the meantime, I suggest you, if you don't know him, to go and listen to the parent album of the latter which is called infectious and which Stijn reviewed on February 7th of this year HERE. It might help to hear what the album we're going to review today was born from.
In two words, ... for those who knew the thunder dome of the great years and front 242, well, here we are ... I have to tell you right away, it will change your life !
So how to say ... I will make 2 reviews in one, Version (A) you like electro / indus and (B) you do not like electro / indus ... come on, here we go :

7Sins part 1 : good ! good beginning, we feel the indus front 242 it's a fanfare beginning !
7Sins part 2 : a purified version and which avoids the lengths of the original piece !
Virus inhumanity : extended version compared to the original, but that makes it probably a little more "easy listening".
Baptized in fire : A big leap forward with this track which will not fail to be part of some playlist ! It reminds me a well known track but I do not fall on the name !
Darkness came : a fucking track to make the dead move but very dated in the style! Not a fan of the reuse of the bass sample from the beginning to the end of the track (too many times) cut at 3:39

7sins part 1 : not that bad, ... there's a bit of front 242 in it !
7sins part 2 : worse and worse, even if the first version didn't make granny want to kill herself, this one almost buried her.
Virus inhumanity : why did you touch this title which was good as it was ? WHYIIIIIII??^
Baptized in fire : It was already good, why change it ? Well, it's not bad !
Darknes came : Are you sure it's the song I liked so much ?

At the end I would say that it is very interesting to have this vision of this album. Let's say that besides the fact that those who are far from liking electro will probably not appreciate ... except maybe one or the other track. We feel that it is a drummer who is at the base of the remix! Maybe a little too much!
My opinion, I still appreciate the industrial and front 242 / ramstein, ... come on, why not, let's say that some tracks are really very soaked in the drum and bass of the 90s, which speaks to me much less. As a result, and given that at certain moments we are really in the techno excess ... I could not give an exceptional note. However, for all the work of re-invention, re-cutting, re-appropriation, mixing, ... well all the work, and with a sometimes necessary violence in the cuts made (see 7sins part 2 for example) I can't give a bad note.
Namely that the two main tracks of the original remain good, although particularly different in electronic version namely: Virus inhumanity and Baptized in fire. The two 7sins parts, for me are better in electro version (especially the first one) than in normal version.

If you are like me, a bit nostalgic electro 90s / 2000 you should be able to like this work of reinvention. Even if it's not a masterpiece it's a good little album that can make sens if they work a bit more together for a next album mixing a bit of electro and more metal.