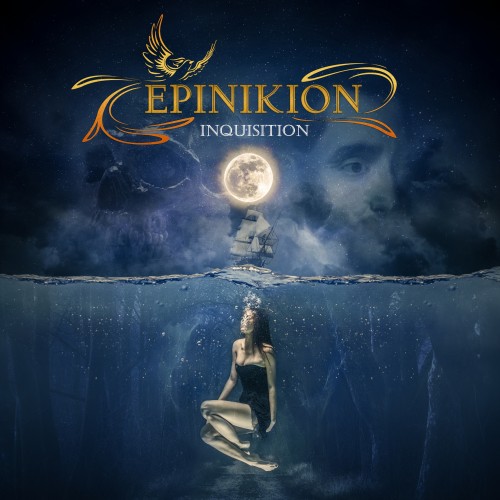 A while ago we were contacted by Epinikion’s founding member Renate to check out her band’s debut album “Inquisition.” I admit that in the beginning, I didn’t put much time into checking Epinikion’s work because I was busy with a lot of other things (moving into my own apartment and recruiting David as one of our new reviewers were 2 main reasons for this delay). But now things have settled and our friends at Hard Life Promotion also invited us to check out Epinikion so let’s shred through this hour-long beast.

“Inquisition” is the independently released debut album from the Belgian symphonic metal band Epinikion. It begins with a short and quite humble sounding orchestral opening called “The Council of Troubles” and then immediately transitions to the title track of “Inquisition.” It starts off with the same orchestral opening as the earlier track but does gradually crank up the intensity with chants, bells and a monologue before finally starting the album off for real with Robert playing some sweet jams and Elenora’s singing some attention-grabbing vocals. The whole thing is quite operatic, but underneath the grandiose keyboards there are also some frantic shredding & pounding bass & drums as if to say: “run swiftly or face certain death.”
Then comes a heavier song called “Love So Sublime.” I particularly love the first part with the crispy bass and the hectic guitars backed by eerie vocals. It feels like a musical metaphor for a love too dangerous to uphold. Other than that, the song once again features symphonic keys with the drums and guitars providing a harsh and dark undertone. Then comes the band’s latest single, “Welcome To The Wonderful World Of Jealousy,” the upbeat riffs give the song a very joyful, almost poppy touch and the vocals have a huge combative feel to them and when the chorus kicks in the vocals and instruments blend into one another in beautiful harmony. Definitely a favorite of mine.
After that intense single things mellow down a little and we get guest vocalist Loek Verlaan whose vocals give the song some power metal vibes. Next up is “On The Brink Of Despair” a fast-paced tune with both male and female vocals. Both vocalists manage to nicely deliver a sense of despair in their deliveries and the hectic beats further emphasize that. The single “In The Middle Of The Night” is next and in this one the classic Within Temptation vibes come off quite well, with the vocals giving the song a certain vulnerability. A very nice track overall, simple but effective.
The longest song of the album, “Sail Away” puts higher emphasis on orchestra and reminds me of Nightwish. The tune begins very slowly and peacefully and eventually builds up speed and power and eventually the orchestral elements get replaced with multiple guitar solos. Next up is a heavier tune, the single called “False Faced Demon,” opening with energetic guitars and keys and guest vocals by Laura Guldemond (from Burning Witches), whose low, heavy voice fits excellent into this slightly harsher and overall pretty dark track.
Then comes a ballad in the form of “If I Could Turn Back Time” with gentle piano and violin and long, dragged out vocal deliveries. It has a romantic but also mournful feel to it. I also like the dual vocals echoing during the song’s finale. The metal returns for the penultimate song, “Strangers In The Dark” an excellent classically styled symphonic metal tune with hard-pounding drums, high-octane keyboards and vocals, sharp bass and beautiful guitar solos. Epinikion’s debut ends with “The Courage To Change,” another fast-paced symphonic metal tune like its predecessor. A solid ending, but not that memorable compared to its predecessor but the guitar-driven finale is certainly nice.
What I think makes Epinikion’s sound different compared to the usual symphonic metal stuff is that they make the sound very harmonious. Too often I feel symphonic metal puts too much emphasis on the vocals and the orchestral instrumentation but in the case of Epinikion, they also make guitar riffs and the bass & drum rhythms an equally important part of the experience and for the most part, it all glues very well. I do believe, however, that many of the songs are a bit too lengthy and that the songs could’ve been more impactful if they were shortened a bit. The big exception to that, ironically, is the longest song on the track, “Sail Away.” A song that’s lengthy but has a clear-cut opening, middle and ending, each act feeling unique from one another and smoothly transitioning from one another. Also, I believe a competent full-time male vocalist could be an excellent edition to Elenora’s singing and finally I think that some keyboard guitar solo duels would add some extra variety to the songs. 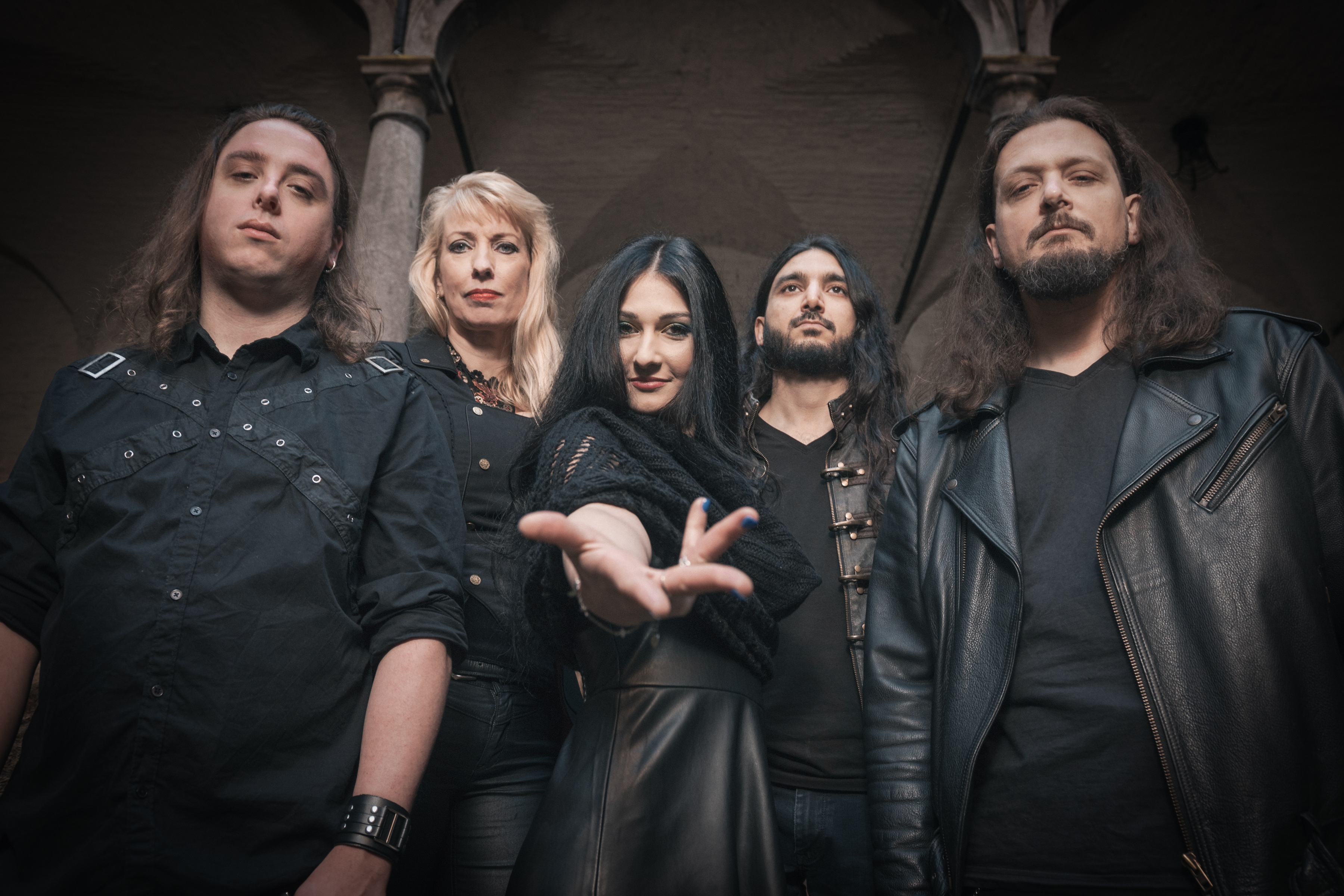 The cover art of Epinikion’s debut features an image of a lonely ship sailing the seas while a young woman (probably the protagonist Eleonor) slowly sinks into the ice-cold waters. In the clouds, next to the full moon, is the face of a man (who I believe to be the deuteragonist Luca) with on the other side a skull. It’s a nice piece of artwork overall. The colorful classical painting look contrasting with the dark imagery of death and emptiness. The story in Epinikion’s “Inquisition” album is basically a Romeo & Juliet story set during the Spanish Inquisition.
The story is told from the perspective of Eleonor, a young Dutch woman raised in a Protestant family who falls in love with Luca, a wealthy Catholic Spaniard whose father is a merciless inquisitor. Obviously, Protestants and Catholics didn’t mix in those times so Eleonor is forced to flee from the inquisitors. But she doesn’t back down and eventually she managed to openly prove the hypocrisy of the Inquisition and successfully defend her relationship with Luca. The tracks on “Inquisition” each tell a chapter of the story including the moment Eleonor & Luca meet for the first time (unaware of their different religious backgrounds), Eleonor fleeing from her hometown and into the forests, plotting to strike back against the people who’ve wronged her and were trying to take away the love of her life.
I like how Epinikion doesn’t simply go for cheesy symphonic topics but rather combines a Shakespearian story with a very dark chapter in human history. And indeed, the main themes of forbidden love and prejudices based on religious or ethnical backgrounds is something that is still relevant today (and, I fear, may remain so until the end of time).

My personal favorites among Epinikion’s 12-track debut are the energetic “Welcome To The Wonderful World Of Jealousy,” the Within Temptation inspired “In The Middle Of The Night,” the epic “Sail Away” (that’s how you write a long song and keep it interesting) and the powerful melodies of “Strangers In The Dark.”
I think the album’s opening instrumental section is too long. If you take the 1:35 opening “The Council of Fools” and combine that with the first 1:30 of “Inquisition” you’ve got about 3 minutes of intro which is too lengthy for my tastes. For me, I would shorten both parts and make that the opening track and then have “Inquisition” start off right away with the monologue and then all the rest of that track. In addition, I believe the aforementioned title track as well as the songs “Stand Up and Fight” and “On The Brink Of Despair” are the tracks that would be best off with a shorter runtime.

7 Shakespearian inquisitors out of 10. While being a bit too lengthy and at times a bit too weak in its overall delivery, Epinikion does provide a rather unique take on the saturated symphonic metal subgenre. The songs on their “Inquisition” debut are multi-faceted and don’t just rely on operatic vocals or keyboards, instead, they bring a harmonious sound that reminds me of Visions Of Atlantis, Delain, Within Temptation and other classic symphonic acts without acting as a mere copy of their respective styles.