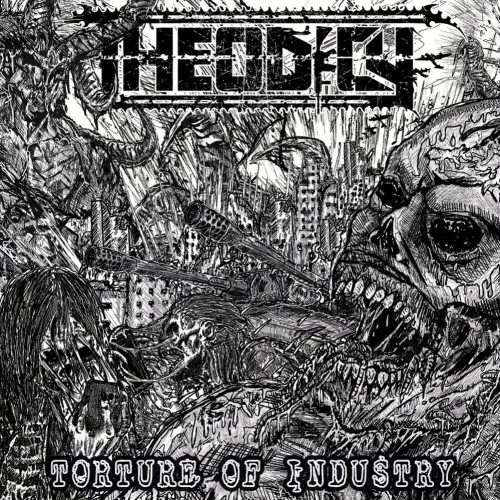 Review by David Hardy.
I’m not a huge fan of death metal. But I do like death metal that avoids a lack of creativity, redundancy, simplest one way drumming, lacks of influences and so on. And now, with Theodicy, I’m happy. It’s nice to hear something that can make me change my mind so early in the morning. It’s 9 o’ clock, and I still have the time of the album to make me first idea, I think I wouldn’t regret it!
But, first things first, I told you it’s 9 am right now, I’ve received the mail at 7:47 for a media release of the album at 8… don’t tell me we have a latency problem! Actually it’s often the case, but trust us, we do our best! If you want to join the team, you always can contact Stijn “Metal Shredder” to join the shredding team! Your help will be welcome!

Anyway, we’re here to talk about the next release of Theodicy named “Torture of Industry” which is the band third album after “Cost of War” (2012) and “I am War” (2017), so it looks like Theodicy releases an album every 5 years. So, where did we put our feet into this time? Well, I would say somewhere into during the Gulf War 1990-2000. The album begins with “Comment and conquer”, I suppose a nice play on words with “Command and Conquer” (the video game) A funny intro, blasting guitars, galloping drums and explosive growling vocals, if it even doesn’t you make waking up your kid for going school … I don’t understand! … What a blast in your face! it’s the right speed, the right intensity… it’s just good enough to be a single and an excellent intro to this “Torture of Industry” album! Well done guys!
With the next track, “From Alive to Skeleton” we’re on the same way of destruction, at 2:45 there’s a nice little guitar solo, that’s neat! At some times you can feel the band beat the measure, even if you’re not a musician yourself. I’m really impressed by the way it’s melodic and constructed for death metal! The musical layers are stacked really nicely and the mixing is crystal clear despite the complexity. For this song, I really do prefer the last third part but the entire tune is really good overall! Next up is “The Truth,” which maybe is a little bit “square” but even if it isn’t all that polished, it’s even better to smash you right in the face with its sonic brutality and “right to the face effect.”
Then comes “White Flag” which is maybe a bit too repetitive and too over-the-top with its violence, but it does hit the mark very well at the 2:15 part. The acoustic ending (complete with thunder and rainfall) is quite unexpected. “Abscess human” is a more conventional thrash tune and doesn’t convince me that much, it’s good but it isn’t as impactful as the earlier tracks. Plus the solo at 2:30 didn’t impress me. Then comes the title track of “Torture of Industry,” which is nothing more or less than artistic brutality! I do believe that this song would’ve been even better with more industrial notes but the song is still very good although I do prefer the track’s first half and despite the solo around 3:25 not convincing me (but no big deal).
“Rapture” is a typical death metal tune, what else can I say? It’s already done, but well done, the backing vocals do add some value. The part at 1:33 till 1:53 is sung with a particular style that I like, very guttural and vicious. The following tune, “Last strike,” also features some feint of industrial possibilities and you know what? I like it a lot! Another good title with some brutal intentions and metallic undertones! The follow-up, “Resource desire” is a song that I’ve tasted and liked, it’s fast-paced and powerful, relentless beauty!
Then comes the interesting track “Hateful world,” it feels different compared to the other songs on the album but it does retain the same atmosphere, maybe an honorable mention to this song’s guitar solo which is a bit longer than its predecessors but overall this song could still be a bit more melodic here and there. The beginning of “Bread and circuses” is clearly not for the faint of heart! It rips and pounds from the very second it begins. I can say it’s a syncope song on many levels but I like it! Again, a little wink to the solo which is even better on this track and well-integrated into the overall song. And finally “Godeater” provides an excellent ending to the well-made album by showing Theodicy at their most vicious side, complete with breakdowns and guttural growls. 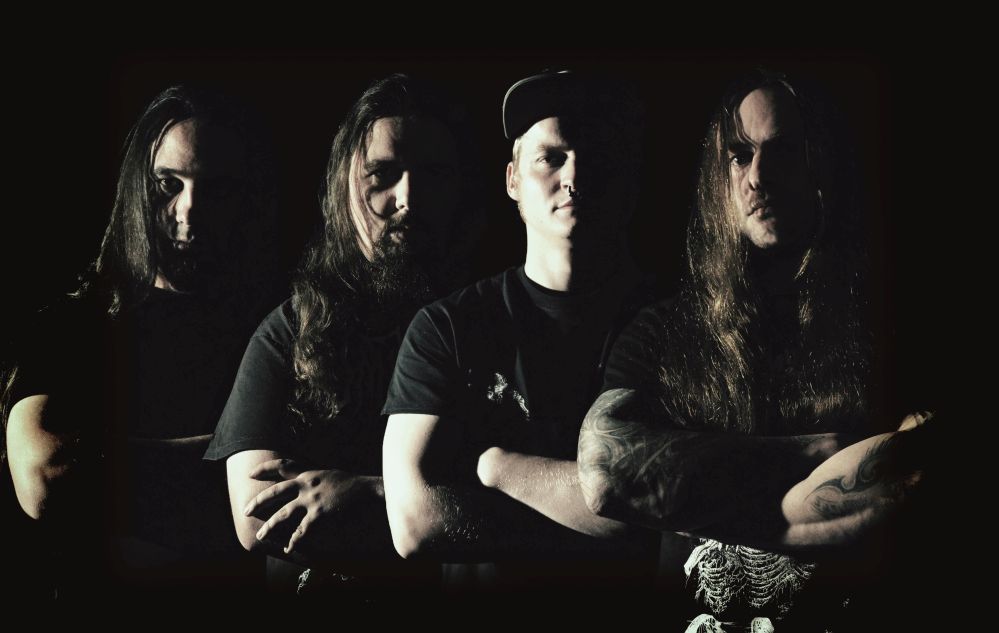 As everything that is death metal, it’s a little difficult to make an active listening of the album in one go, but I think that it clearly has its place in the cycle of the albums to be discovered, therefore, I clearly encourage to the discovery of this group especially for those which are not afraid of the growl (it’s death metal nevertheless!).
With 12 songs, you’re in for a long ride! It’s not just a piece of cake, it’s the whole bakery and it’s diversified enough to avoid being boring.
Note: The mixing/engineering is really well made and add some value to the album, Indeed, It would have been extremely easy to completely mess up the mix due to its complexity, but, it’s a test that they’ve clearly passed with flying colors!
A band that could well make forays into industrial death! Even if their death base is obvious, it would be a shame if they were to limit themselves to just that. The sampling, the melodic side and the not always simplistic constructions are proof that they can produce really diverse and varied songs of consistent quality!
I particularly appreciate this diversity and this style that they should continue to look for quite close to many other styles and influenced by many good sounds. In fact, it is a good album for those looking to start exploring the death metal subgenre because as much it does not deny death metal’s brutal and violent side, it does external and melodic tints which add a true "plus-value" to the whole experience.

A 7,5/10, the extra half a point in the hopes they’ll be giving me something with a bit more industrial stuff in the next album!