Power and Thrash get it on! 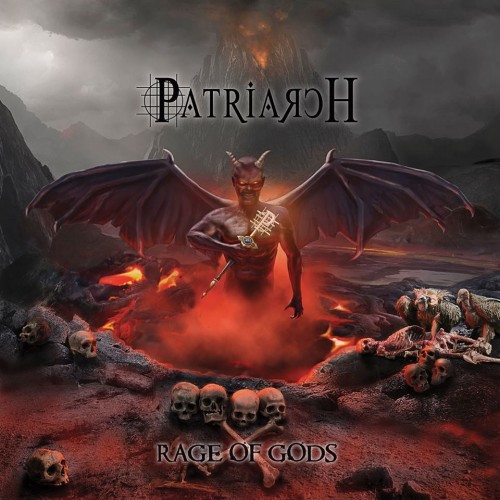 PatriarcH’s Rage of Gods is an album I received in two different ways. First, I got the album via Hard Life Promotion, who have already given me great material from bands like the Skeptical Minds, Dyscordia and Temptations For The Weak. So thank you, Mike! But I also received a physical copy from Kevin, PatriarcH’s vocalist, when we met each other during Wizzfest 2016. So thank you, Kevin! And thank you too Nico for introducing Kevin to me and telling him to give me a copy! Let’s take this devil by the horns, shall we…

Rage of Gods is PatriarcH’s fifth full-length album in their almost thirty year long existence. Using a self-made up term, I’d describe PatriarcH’s sound as “barbaric power metal.” What do I mean by that? Well, the band plays power metal, but rawer and darker than usual, a style you’d more likely expect from thrash metal. The vocals aren’t inspired by power metal tenors like Dio, but feel more like a balance between clean singing and grunting. Too harsh to be fully blooded power metal, but not extreme enough to fall into gritty thrash or gory death metal territory. The same thing can be said about the guitars and overall pace of PatriarcH’s sound. The guitar solos from Stijn and Freddy are very technical, similar to power metal and classic heavy metal, but they also frequently get it on with some quick, hard-edged shredding! Overall, the music feels both heavy and accessible at once. Nicely done!

As we deal with a hybrid between power and thrash metal, the album has a variety of themes to offer from both subgenres. Rage of Gods’ title track describes the destruction of Atlantis, By My Forbidden Words tackles censorship and Into The Neverwhere is about the experience of dying (at least, how the band believes it to be). Yup, no tales about elves, dragons or heroic deeds. Just tasty, dark and gritty material and it fits PartriacH’s sound like a glove!

On the front cover we’ve got good old Lucifer himself emerging from a crater wearing a staff with PatriarcH’s logo on its head. Seeing the pitch-black mountains and fields around him, I’d assume he’s in Mordor, with Mount Doom looming in the background. Seems Frodo and Sam will now have even more trouble destroying the One Ring! The inside booklet provides the lyrics for each individual song with the background images showing visual representations of their respective song’s titles. Very cool!

Not an easy task! All songs on Rage Of Gods are very fun to listen to and they all have a similar feel to them. But I’ve got to take a pick here, so I’ll go with the opening title track. With the aforementioned viciously sounding vocals and riffs going full force, it functions as an excellent introduction to the band’s sound. [THE SHREDDER’S SCORECARD] 8 Satanic Rings of Power out of 10! PatriarcH’s Rage Of Gods is a successful, unholy marriage between power and thrash metal and easily enjoyable for fans of both subgenres. An unique album that will make you crush your enemies, see them driven before you and hear the lamentation of their women!