Lost in my head, the battle has no end 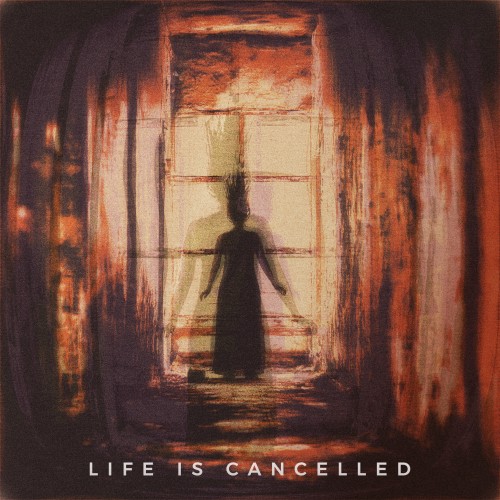 Review written by David Hardy.
For one of my first reviews here, Stijn “Metal Shredder” asked me to dive into: "Through The Void" ... nu-metal! I'll be totally honest with you, the actual characteristics of  what makes a specific metal subgenre different from another largely escape me and afterwards I went to check what nu-metal actually meant. So don't be surprised if my connections seem not/too obvious! Once again, I’ll be giving you my analysis in two steps: 1) my discovery with the EP in order (disorderly in this case) with my initial impressions. 2) my conclusion of the EP and what it truly evokes within me after listening to it again and doing some research about the band and their overall style.

I’ll admit, I didn't start the “Life Is Cancelled” EP at the correct beginning! In fact, I had begun my trip through this band’s second EP by watching the "Answer" clip before the others. Afterwards, having received the full EP, without paying attention to the track numbers I launched myself into "Believe!” In other words, the EP’s final track rather than the opening tune (called “Denied”).
Damn! Amateur mistake! I’ll be more careful next time, I promise! In any case, thanks to this badass “Believe” tune I wondered for a moment whether I was teleported back to the 2000s, particularly thanks to the screaming vocals that immediately slammed themselves into my eardrums and had some Slipknot feel to them. But I also heard the song’s heavy but melodic main riff that reminded me a little of the great era of classic (good) Sepultura, but without the Brazilian percussion touches. Then around the 2:20 minute mark, the song falls back on its feet with a sweet, cleanly sung chorus. What I liked about “Believe” is that it’s simply good and pretty unpredictable with its noisy style opening to eventually more to a more melodic stage. I also felt this duality in the lyrics as well, with the singer describe his inner battle between his good and bad sides (“lost in my head, the battle has no end”) but there is a slight message of hope with the line “believe in time, open your eyes there’s a helping hand.” What I did miss in “Believe,” however, was some powerful double pedal drums to punctuate the 1m30 and 2m breaks. All in all, while “Believe” isn’t the EP’s opening tune, it did entice me to check out the rest of the EP.
Eventually I did check out “Denied,” the aforementioned true opening track of the “Life Is Cancelled” EP. I was expecting a very brutal start but the song (and EP therefore) started with some electronically fueled bass reminiscent of Front 242 before the band goes for a more straightforward nu-metal style. It’s a song that made me quite confused, but in a good way. The band frequently switches tempos, melodies and vocal deliveries. It feels familiar on the one hand, but quite exotic on the other hand. In other words, Through The Void deliberately plays around with our nu-metal expectations without going too far of track. I also feel that the COVID19 pandemic also played a part in making this song. It certainly is the darkest song on the album with lyrics dealing about imprisonment (maybe a metaphor about the quarantines most of us had to go through at some point during the pandemic).
I’ve already talked a bit about the single “Answer” earlier since it served as my first encounter with Through The Void and for me, this song is a real nugget! A track that allows vocalist Chakib to exploit the full potential of his voice and his flow! He's perfectly up to the level of the greats of the genre! The well-paced, hard-pounding riffs and intense vocals of this tune makes it a clear demonstration of how beautiful the often denounced nu-metal genre can be and fits perfectly with what we expect from a high level band! Well done!
Unfortunately I had more trouble getting myself invested into the EP’s 3rd track "Enter." For me, the song’s mix doesn’t take! ... I really feel that in this particular tune the mashup doesn’t work because the musical elements are too far from each other to effectively glue with each other. For me, it almost feels like 2 separate songs slammed together. It’s not a bad song, far from it, but it isn’t as impactful as the other 3 songs on “Life Is Cancelled.”

I’m not going to lie, when I had read up what nu-metal actually consisted of, I recognized the style of "Through the void" as clear-cut nu-metal! The sometimes distant musical influences as well as the versatile musical style and vocal power makes “Through The Void” style a very distinct "mashup" style and not necessarily feasible for everyone! Indeed, in addition to the technical qualities, you have to be open to a lot of other things to be able to produce such tracks. The things I would like to see improved in Through The Void’s future material are:
1) more room for the singer's flow! Indeed, Chakib is lucky enough to be such a flexible vocalist, but moreover he has a fucking sick flow! Contrary to many other nu-metal singers who only know how to scream heavily, Chakib can also easily sing like Zack de la Rocha... so they might as well put this quality forward!
2) Simplify things rather than force complexity where it isn’t needed! "Enter" is a typical example for me! ... If it doesn't work, it's because there's something better to do with it, so don’t make things complex for the sake of it!
3) This is totally subjective, but I found there was little to no bass sound being put forward, I believe there are certain moments wherein a solid bassline could really bring that little extra to Through The Void’s sound, an extra that could make for a big difference in my opinion!
To conclude my review, I’m sure that in a short time (in my opinion 1 year) you will find them performing on the big stages! ... The potential is there, the ideas are there, the inspirations are there, Through The Void will just have to channel and coordinate them. With their second EP, Through The Void proves that there is genuine nu-metal talent in Belgium. Nu-metal talent that takes the usual elements from this particular subgenre (and for other genres as well) and mashes it up for a short but engaging experience.