“Unfinished” is the first full length from this American gothic, symphonic metal band “Shield Of Wings”. This album is self-released and is send to us by Curtis Dewar Promotions. This release is only their second release (besides the two singles this year) even though this band already exists since 2005.
This album is just my cup of tea, a symphonic metal band with as theme the mind and everything to do with the psyche. This is to my liking because for me it’s quite important to find myself in music, being in the lyrics or the tunes, here the both are combined.

The opening song of this album is the very appealing song “Crushing Hail.” It starts with an operatic part that introduces the rest of the album. This song is vocal wise the most typical symphonic metal song on this album and gives me kind of a “Nightwish” vibe. The pounding drums and shredding guitars give the song a bit of a thrashy vibe. Next up is “Native Colossus,” a tune with more folk metal weaved into it. In this tune Lara switches between deep vocals and her falsetto voice, this is alternated with grunts from Aliyah. This interplay of voices ensures a balanced song. Once again there are pounding drums, but these are significantly less in the calm and melodic parts in this tune. The parts where the music progresses in a faster pace, once again have a bit of a thrashy vibe.
The third track is called “Breathing” and is by far the darkest track on this release, with dark grunts and snarling vocals alternated by clean vocals. This darkness is supported by the menacing guitars. The chanting at the end of the song make me feel that the band meant to make it feel like you can’t breathe anymore and the end is near. Continuing with the fourth song “Frozen Harbor,” which starts instrumental and then progresses in a very operatic chant, this only to continue in a very folky symphony. Besides the first song this is also a very typical symphonic metal song.
Following is “Cedar,” a folk inspired metal tune, the keys are played in a very light and airy way that makes this song way more folk inspired than the rest of the album. At the end of this tune the keys are kind of synth like, this gives the song more of an 80s vibe. The sixth track “Wetland” is the first single of this release. This single ( and like the following) has been released this year. This track is in my opinion the most balanced track of this album, this because shredding guitars and pounding drums are perfectly accompanied by the angelic full vocals and occasional grunts. It keeps me longing for more which is perfect at this moment on the album.
The next song is “Mind of Myth” and starts in such way that you are curious what’s coming. The beginning of this song starts as a medieval like chant that invites you into this song in a way. In this medieval chant Lara’s voice fits perfectly because of her full and deep sound. This chanting continues in the chantlike singing that’s being used in this mysterious song. Following is “Sunfire Shower” this tune feels more like power metal tune because of the fast and swift guitars and the clean vocals and the short part of snarling grunts. The fast pace is a nice waking up song after the slower rest of the album. The ninth track, “Come Home,” is a very serene and calm ballad. This track is also the shortest on the whole release. The vocals are also a bit higher which guides the more serene and angelic way of this song.
The last song of this very successful first full length of “Shield of Wings” is called “The Scarred Clay Reshaping” and starts with an acapella part that progresses in an symphonic wall of music. This last song is a great conclusion for this release. The vocalists are both singing in this song and the guitars have fast, shredding parts but also sweet and mellow parts. Whereas the drums also have mellower parts but also very pounding ones. 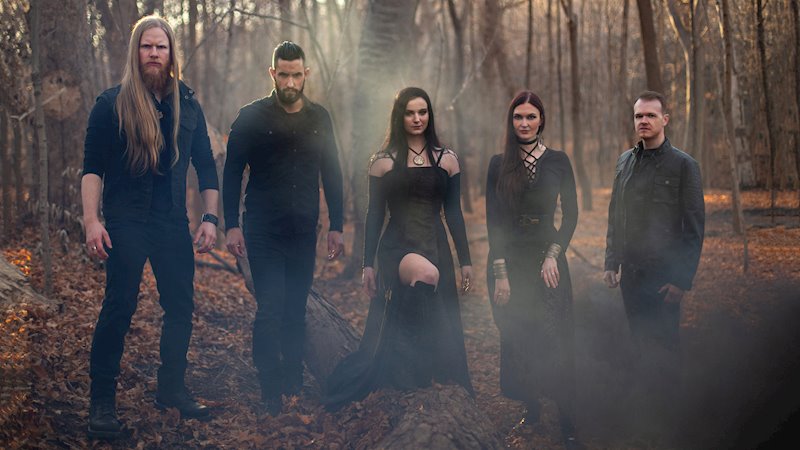 In symphonic metal, female vocals are very often really operatic and high pitched, where Lara’s voice is rich and a couple of octaves deeper (even though her falsetto voice is equally stunning). This creates a very soothing and relaxing atmosphere and is definitely a strength to this very beautiful album.
This release is alternating between the pure symphonic orchestral parts and the more dark and menacing parts of the gothic metal. This not only in the tunes but also in the vocals. The grunts and menacing vocals of Aliyah fit beautifully in this symphonic metal that flirts with gothic and thrash metal. If I could give one point of remark, the songs are a bit overly lengthy, this is not terrible but if you don’t like long songs, this will sadly be not really your cup of tea.
At times this record reminds me heaps of “Nightwish”, “Epica” and “Delain” but most of all are “Shield of Wings” doing their own thing and that suits them very well, this album is one to never stop listening to. This record and band in extension has definitely potential to become one of my (and many others) favourites.