A bitter but tasty pill 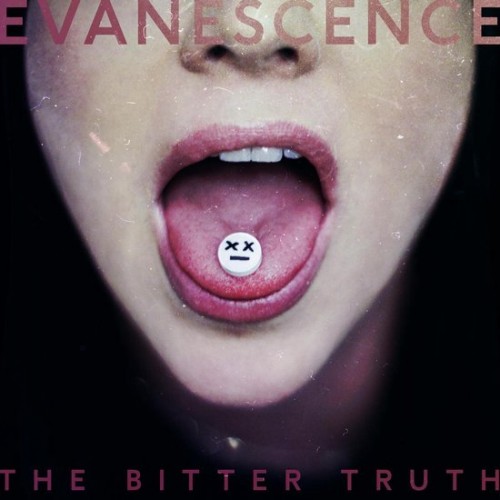 I’ve been a longtime Evanescence fan and when the band’s fifth album was announced I was looking forward to not only listening to it but to also review it here. Stijn “Metal Shredder” gave me a physical copy of the album as a gift for our 1-year anniversary of our relationship but I already was hooked to it as soon as I had heard the first single. And now it’s time to put my love for this album on paper. “The Bitter Truth” is released via BMG Rights Management.

The first song “Artifact/The Turn” is an electronic prelude to this album. It starts very calmly and stays that way but it still evolves into a desperate cry seemingly anxious for more. Next the music continues seamlessly into “Broken Pieces Shine”. A tune with grim backing rhythms with the pounding drums being very prominent. The song feels like a cry for help when you’re in a bad relationship (represented by the aggressive beats) that you don’t want to escape because you have the feeling all will be okay in the end (represented by the happy-sounding vocals). The following track is called “The Game Is Over” and once again features the same raging drums in the background, which can actually be heard throughout the whole album. This particular tune also has scorching bass lines that along with said drums come forward in the main riffs and which gives this song a nice but desperate vibe.

“Yeah Right” is a more pronounced, bubbly pop rock song but still containing a powerful message. This track deals with the idea of the queen we girls can become when we’re able to make our own life decisions. Amy is aware that she’s a strong woman but that everyone makes mistakes and the man she’s singing about represents one of those mistakes. Next up is a rougher song called “Feeding the Dark” but the chorus on the other hand is more melodic, with higher and more pronounced vocals. The tune is about the personal inner demons we all live with every day.

The following track is the debut single of “The Bitter Truth” and it’s a ballad called “Wasted On You.” This tune is varied with several peaceful, introvert sections and a roaring chorus that was quite a surprise the first time I heard that song. “Better Without You” is a balanced and energetic song about living a better life without a toxic person who was part of your life for quite some time. It translates the feeling of freedom after a long time into a grinding and menacing song. The next track is “Use My Voice,” which has a very powerful message that any oppressed minority can speak for themselves and be strong enough without help from the majority. This tune starts off very muted in comparison to the rest of the album, but then it evolves into an explosion of singing, riffing and chanting. I particularly love the delivery of the line “but don’t you speak for me.”

The following tune is “Take Cover” a more metal-oriented song with snarlier vocals seemingly luring you out to come out and fight, because she’s coming to take over whatever you have started and can’t finish properly. The aggressive snarling also comes back in the pounding drums and rumbling bass. “Far From Heaven” is a down-tuned symphonic ballad, which gives me the feeling that the time has come to let go. Letting go in the most diverse sense of the word, be it quitting a relationship in any way or even getting over a past trauma or phobia. Even though this song is quite peaceful it still enters my mind as a profound message.

Then comes “Part of Me,” a track that continues the album’s usual style of orchestral guitar and keyboard riffs and prominent bass and drums. This song, however, is more vocal driven with the cleaner chorus. The final track, “Blind Belief” is in many ways the perfect conclusion to this fantastic album. It features elements from all previous songs in terms of topic but also when it comes to drums, guitars, vocals and keys (too bad the bass did take a step back here). After all the doubt, confusion, leaving and letting go, we’ve finally come to the conclusion that we are the future (whoever we is meant to be).

Evanescence’s new full-length is one gem that I can’t sit still to, I have been bumping my head every time I was listening to it. “The Bitter Truth” is a complicated album. On the one hand it’s the same Evanescence as we have known for the last 26 years, but on the other hand it’s also a refreshing and quite different experience, just like it has been in their previous albums. Still, the band stays true to themselves with a new album that every Evancescence fan will enjoy! Here’s “Better Without You!”