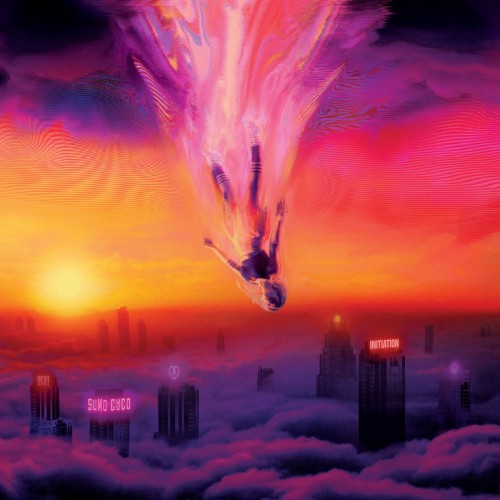 Sumo Cyco is a band that I’ve been following and enjoying for a while now so I was quick to buy myself a copy of the band’s major label debut “Initiation.” It’s the third album from this Canadian punk pop rock band and their first release under the Napalm Records label. This release was also recommended to us by our Dutch friends over at Hard Life Promotion.

The full-length begins with “Love You Wrong,” a powerful opener filled with extreme beats and aggressive vocals with some high note intermissions. The follow-up, “Bystander,” is even more hectic with lightning fast drums and harsh riffs. The joyfully sounding “Ollala” yells that ring through the song give this tune a poppy feel but the melodic death metal inspired beats and shrieks do provide this song with an underlying darkness.

“Vertigo” is a pretty sad tune about mental abuse that, in typical Sumo Cyco fashion, is subtly presented by the catchy and convincingly sung lyrics waving alongside the hard rocking guitars. The song is also significantly more melodic compared to what the band played earlier. The band’s punk influences become more prominent in the next track, “Bad News.”

The band then moves towards an energetic anthem called “No Surrender.” It’s also a slower tune than the band’s usual stuff and that further amplifies this track’s overall power especially with the way how the verses build up towards the explosive chorus. “M.I.A.” has a tribal-electronic feel with the clanging percussion joined by cheery 8-bit beats and “Cyclone” is another fast-hitter with symphonic-sounding guitar melodies backed by multilayered drums.

“Run With The Giants” is a primarily electronic tune with some dubstep elements and which has a nice videogame feel to it and so does the next track, “Overdrive” but a bit funkier this time. Then the album reaches “Power & Control” brings back guitar focus with some powerful riffages intertwined with sections of foreboding bells and finally the “Initiation” album with the energetic “The Dance Is Doomed,” an excellent finale to this full-length release thanks to the pounding beats, psychotic vocals and raw bass.

While the band’s looks and sound may appear to be girly pop rock on the outside, when you dig a bit deeper you’ll see that this band has much more to offer. Sure, there is girly pop rock in Sumo Cyco, but they balance it off with a ton of punk, metal and electronic influences! There’s melody, attitude, variety and brutality! Lightened darkness and colorful dread, organized chaos and dystopian anarchy! Overall, Sumo Cyco’s major label debut blends metal, punk, pop & electro together for an intense and frantic mix that’s tightly knitted together by a band that puts sufficient method in their madness. A lollipop killing spree! Bizarre, but it works! Enjoy "Bystander!"