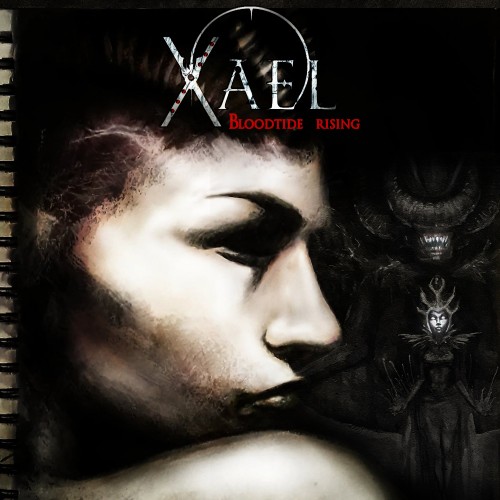 Confession time: I have never listened to Nile before. My metal pub would play them regularly, I’m sure, but I never picked up a CD and really listened. So the fact that Xael has a member of Nile (bass player Brad Parris) means nothing to me. The Reticent (guitarist-vocalist Chris Hathcock) and Rapheumet’s Well (drummer-vocalist Nassaru) are bands I have honestly never heard of. I like to think this makes me a more objective reviewer than others, but I could be wrong. “Bloodtide Rising” is Xael’s second stab at a full-length album. Their first album, called “The Last Arbiter,” was released in 2018. Let’s dig into this second outing. “Bloodtide Rising” was released via the American record label Pavement Entertainment & provided to us by Asher Media Relations.

Firstly, let’s start with some general comments. The drums and percussion throughout this album are excellent. Not too surprising, considering the original idea for Xael came from drummer Nassaru Ward. The variety in the musical styles is great, too, Xael knows when to hit you hard and when to give you time to take a breather. I was also excited to receive a file with all the lyrics of “Bloodtide Rising,” but ended up very confused as they contained errors and some lyrics were either missing or seemingly just thrown in as a bonus. Still, it was nice to be able to truly dive into the world Xael wanted to create: a mix between Mad Max and Bladerunner, wherein other worlds and sci-fi collide with a complex story of imprisonment, love and dark secrets. Who says metalheads aren’t romantics at heart? The band prides itself on having created their own lore and multiverse. In that sense, “Bloodtide Rising” didn’t disappoint. I’ll try to interpret their songs to fit the story they’re trying to tell, so you can come with me on this journey as I wander through their worlds.

Xael starts things off with “Suun Rai Aru,” a subdued, but beautiful intro with haunting piano, tribal drums and a choir that even has a throat singing section. I guess the popularity of bands like The Hu cannot be underestimated. “Suun Rai Aru” sets the tone for a different kind of adventure and makes you eager to dive in. “As Decreed: The Law of Vuul Athmar” is a mouthful, and in that sense it’s ironic that the song starts off with throat singing. The band quickly jumps in with some excellent old-school guitars and drums, the song racing at an almost reckless pace before giving us some great guitars to set the scene. Joshua Niemeyer’s vocals are excellent, showcasing a deep growl that’s right up my alley. The music has these well-timed abrupt stops, making you hold your breath for a fraction of a second before the song takes you further on its travels. “As Decreed” ends with clean vocals mixing with grunts, which I like. From what I can gather from the lyrics, this is the part of the story where our brave heroes are captured and taken away from their home planet. It also mentions the queen of their new world.

The guitar intro for “The Waste of Dreadrift” is amazing. I was reading something while listening to this album the so-many-eth time over –you can’t review on a single listen – and it literally pulled me out of what I was doing. That, my friends, is a good piece of music. The vocals are more varied on this one, clean, scream and grunt weaving through one another to create some cool effects. The moody piano that I first heard in “Suun Rai Aru” returns in full force for this song, adding a layer of haunting horror. This song, as is obvious from the title, deals with our heroes imprisonment. “Srai–The Demon of Erring” was a bit harder for me to quantify. It’s a great song, don’t get me wrong, but when thinking of things to write about it, the only thing I could come up with was that the clean vocals were less interesting to me than elsewhere on “Bloodtide Rising.” They fall a bit flat compared to what Xael is capable of and shows off on the rest of the album. But the drums are tight, the keys add a cool extra dimension and the choirs fill in the necessary gaps. The dual vocals are interesting, too. It’s just that the other songs offered me more when it comes to clean vocals. Not sure I can tell you exactly what. Bonus fact: the end of this song really reminds me of “Where the Slime Lives” by Morbid Angel. All-in-all, “Srai” is a good entry for “Bloodtide Rising.” Story-wise, I’m not sure if Srai is the prisoners’ guard or their inner beast. But maybe that’s exactly the point.

“Dark World Mirrors” initially gives off a Tristania-esque vibe. I found myself almost expecting female operatic vocals to start. But then Xael does what it does best and hits you with a freight train of growls, drums and guitars. The clean singing takes on a Gregorian edge for a bit before wandering into Leprous-style vocals. However, vocalist Joshua takes no prisoners and brings it all back to those awesome low grunts. The horror aspect becomes more apparent in this song with the use of keys, strings and haunting choirs. There’s an excellent scream in there, too. This song seems to be one of inner conflict: the protagonist wanting the love of his bed mate, but at the same time fearing her power. Xael references a dark secret in their album description, I wonder if the protagonist already knows this secret before seeking the queen’s affection. Another song that makes you stop whatever you’re doing is the title track, “Bloodtide Rising.” Straight away, the song assaults you with heavy drums and guitars, setting a deadly pace. It feels very polished from the very first second. There’s a back and forth between the different vocal styles that add an extra dimension. You feel like there’s a fight going on, even if at first you’re not quite sure what it’s about. The solo work from Daniel and Chris is really great in this song. I listened to it a few more times, because it’s damn impressive. And that children’s music box at the end is masterful. Where “Bloodtide Rising” seems to describe the conflict of loving a woman and fearing her, the music box seems to indicate that our protagonist, in fact, very much got the girl. And that now, there is a fruit of her womb.

Interlude “The Red Odyssey” is haunting and simple and is a great way for you to gather your thoughts after a wild ride. It has some cool tribal drums and beautiful vocals that meander over these beats. Lyrically, this song seems to be about the heroes’ place in the world and how time continues and alters their planet and themselves. “The Red Odyssey Pt2: The Temple of the Sky Eater” doesn’t seem to want to start straightaway. It’s a great way to keep a listener on the edge of their seat. At least, it worked on me. While Xael’s sound is epic throughout this album, this song in particular seems to drive that point home. The tribal percussion and death metal drums are excellent, driving you ever forward in the song. Again, I was struck by the hints of Leprous I heard in the clean vocals. Joshua, Chris and Nassaru do an excellent job of offering varied vocals throughout this song. “The Red Odyssey, pt 2” speaks of a betrayal and being cut to the quick. The clean vocals at the end are simply beautiful.

“The Odium and the Contrition” again brings the tribal drums to the fore, an excellent choice. The guitars for this song immediately struck me as Gojira-inspired. Which, for me personally, is a definite bonus. There’s a section in this song where you hear these haunting clean vocals in the background, which I really enjoyed. In this song, it’s not clear whose perspective we’re getting. Is it the protagonist, singing about his transformation into a servant of death? Is it his beloved queen, openly revealing her secret? Or is it their child, looking at their life and what their future holds? “The Odium and the Contrition” ends quite abruptly, which was a bit odd listening to this album the first time around. But listening to “Bloodtide” Rising again, I noticed that wasn’t a singular event. In fact, several other songs do exactly the same thing. I guess it was just more pronounced here, because all music literally stops. Is this a hint from Xael that the story hasn’t ended yet? Or does it mean things can just get cut short sometimes? In any case, I certainly didn’t want it to end then and there.

The artwork for Xael’s Bloodtide Rising has many facets. First, there’s the ladder-like structure to the left of the image, which to me could indicate a spine. Then, there’s the woman who is looking to the right, her back to the viewer, the image cut off just below the shoulder. The sharp cheekbones and pouting lips suggest she is probably quite beautiful, but we aren’t given anything more than this glance from behind. The right side of the cover is taken up by a woman wearing what can only be interpreted as royal robes. She has a crown-like item on her head. Her face glows, everything else set in darkness. Above her head there is a Giger-esque structure, which hints at an alien queen with glowing teeth in the dark. Could this hint at the queen’s dark secret? Clearly, Xael is trying to say a lot in a single image.

There are so many amazing songs on this album that it’s hard to choose a favorite. I’m going to go with “The Waste of Dreadrift” as this is the first song on this album that literally stopped me mid-action. I just had to click back to my media player to check the title of the song. I would say that “Srai – The Demon of Erring” is the least amazing song. But with an album like “Bloodtide Rising,” that’s not saying much. Every single song is well thought out and well produced.

I give “Bloodtide Rising” a score of 9/10. This is some of the finest symphonic death metal I've heard in a while. Xael creates an epic world, just as they promised. I like this album, I keep wanting to play it again and again. I would definitely buy this album, too. If you’re into interesting and complex death metal with a healthy dose of sci-fi and lots of different musical influences, then "Bloodtide Rising" is for you. In the meantime, enjoy this video of Bloodtide Rising, which features guests Mathieu Marcotte (guitarist from Augury and Humanoid) and Nate Miller (Chinese Violin)!