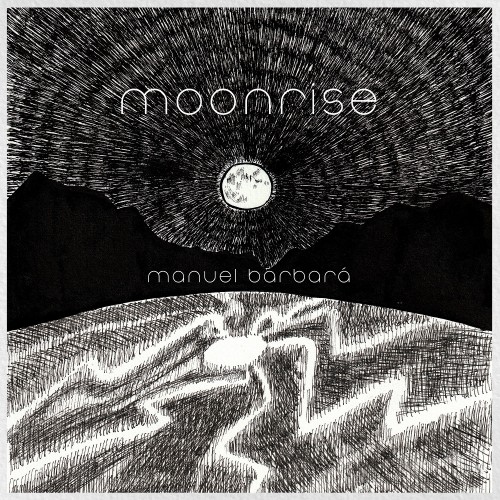 Manuel Barbará is a New-Jersey based musician and composer with a passion for progressive metal and classical music. Manuel presents his debut album “Moonrise,” combining crushing riffs and atmosphere inspired by bands like Periphery, Tesseract and Dream Theater as well as composers such as Bartók and Stravinsky. While Manuel Barbará took care of both guitars and programming, the record also features Nick Thorpe on bass and Joey Ferretti on drums. The album is designed to take the listener on a journey through a series of loosely interconnected sound worlds that Barbará  created. “Moonrise” is sent to us by Asher Media Relations.

The album starts with a heavy note with the title track “Moonrise.” This song combines a complex riff and rhythm dancing around with some haunted keys in the background. This sets the atmosphere immediately. In the middle section we’re treated to a little piece of piano, before the bass takes us back to the riffing. According to Manuel the piano piece was videogame inspired, which explains why it brought me back to my SEGA gaming days when I first heard it.

The album’s next track, “The God Complex” starts out mellow with a lot of ambiance. The big riffs are complemented by electronic touches in the background, and they blend together very well. The song features a great solo reminiscent of Jeff Loomis of Nevermore fame. “Children of Prometheus” is more straight-forward compared to some of the more complex songwriting on the record. But the track shows its teeth in its latter part. A dark, forboding vibe in the keyboard section in contrast to the quirky riffs reminds me of Devin Townsend.

Time for the biggest track,“Mirrors,” which is split into 3 parts. “Mirrors I – Image” sets a beautiful atmospheric tone. Think Tesseract, but also post-rock like God Is an Astronaut. “Mirrors II – Silver” is an ambient interlude. Haunting and beautiful, it takes you to a strange and alien place. The opening riffs in “Mirrors III – Reflection” immediately call you back to earth. These riffs and the overall atmosphere are clearly inspired by Meshuggah and Periphery, making this the most aggressive part on the record. The fact that all the parts are so sonically different, but still work together show the remarkable composership of Manuel.

Manuel calls the album’s final track, “The Nightmare Weaver” the most ambitious composition on this release. He isn’t lying! Clean guitars, dissonant tones and 8-string madness and constant rhythm changes all keep you on your toes at all times. The track ends with a cord progression reminiscent of the one in the earlier “Children of Prometheus” track.

The artwork for “Moonrise” is pretty straightforward. It's a black and white drawing of a rising moon. From your view you can see the landscape and mountains. The moon gives off a different reflection on the ground. Almost as if it’s emmiting beams. It could stand for the influence the moon has on Earth and all of its inhabitants. Just like the music, the theme, and interpretation could be different for everyone.

I really enjoyed my time with this album. I'm a big fan of djenty riffs, dissonant tones and atmosphere which this album provided aplenty. The record shows that Manuel is a master craftsman in composition. The album clocks in at about 35 minutes. In this case that's a plus. It doesn't overstay its welcome and makes the tracks stand out more. The album is instrumental, which could be a turnof for some people . But to me it benefits from it. It's more of a listening abum than an all-out headbang/rocking out record.

Personally, I enjoyed putting the record on, putting on my headphones, closing my eyes and embarking on a journey in my mind for the next 35 minutes. I enjoyed all the tracks because each had something different to show for it, but for me the “Mirrors” trilogy is really stands out on the record. That was a journey on its own. The record is an algamation of my favourite bands, each with a Manuel Barbará touch.

This is an astounding first record. Especially for a single composer. If you are a fan of atmospheric instumental metal, give it a shot. I give the album a solid 8/10. Manuel is already looking forward to the future with new compositions which are even more refined and elaborate. I'm looking forward to it with great anticipation. Here’s “Moonrise!”