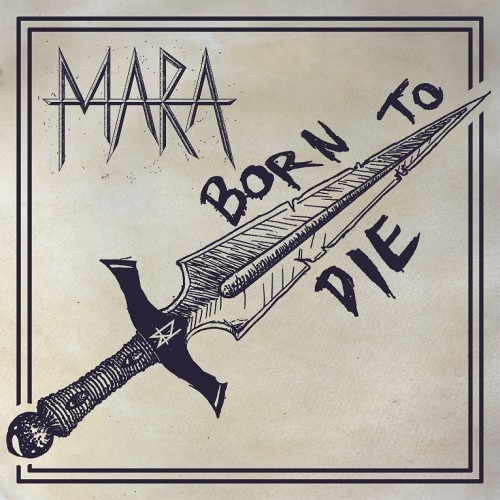 As I was searching for new material to shred, I discovered this interesting single from the Swedish band Mara. The band’s melodic aspect in particular sparked my musical curiosity and so I decided to make Mara’s “Born To Die” my first single review! “Born To Die” is the first single for the upcoming studio album “Djävulstoner” from the Swedish melodic death metal band Mara. The single, as well as the album, are released via Italian record label WormHoleDeath.

“Born To Die” begins with energetic typically melodic death metal beats in various rhythms and slow, furious yet also slightly restrained vocals. It’s kind of a blend between death metal melodies and doom metal vocals. The song has many instrumental parts and sudden tempo and vocal changes, which give the song an unpredictable feel and keeps things interesting as the single continues through its 9-minute runtime.

The song’s atmosphere is mysterious and a bit scary. It rocks very well with the roaring guitars that are featured in this tune. Particularly the single’s multiple guitar solos are beautiful to hear. The agonizing vocals make this song even creepier as does the videoclip, which has footage of Mara performing live along with scenes inspired by slasher horror films, featuring a young woman who gets hunted down by a creepy guy with a skull mask and miter. Not my kind of music video, but I can watch it from time to time. The music video does get more violent in the end, because the protagonist eventually gets brutally murdered by the skull-masked stalker who’s been following her the whole time.

If you like darker melodic metal then you’ll certainly enjoy this Mara single. The horror-like music video gives off a vibe that suits the song’s depressing setting. I like this tune as a welcome change to power and symphonic metal that I usually shred. If it was a more traditional death metal tune I probably wouldn’t have liked it as much because I don’t quite dig overly aggressive music. That opposed to this Mara song, which is more subtle in its delivery. If you enjoy death metal with mystery, dread and plenty of subtlety hard-hitting beats, then you can’t go wrong with this! Enjoy the videoclip!