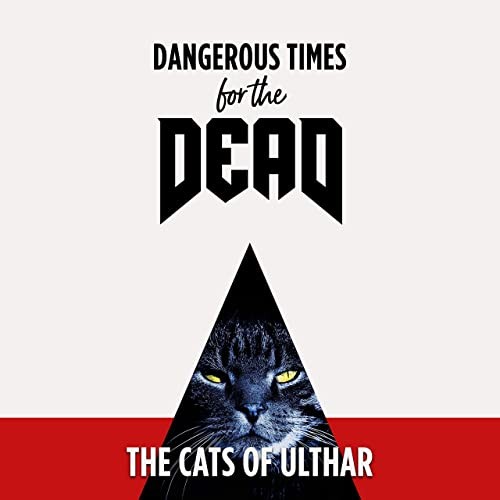 One band that we’ve been keeping a close eye on during these past 6 months is the Dutch heavy metal act Dangerous Times For The Dead. Over this period the band has released plenty of varied and excellent singles, one of those was the beautiful “Storm The Castle” (read our review: http://belgianmetalshredder.be/reviews/257). In addition, we had an awesome interview with bassist Gerrit last year (read it here: http://belgianmetalshredder.be/interviews/148). And now the band kicks off 2021 with yet another sweet single, “The Cats Of Ulthar!” Let’s shred it out!

“The Cats of Ulthar” is the 6th single from the Dutch old-school metal act Dangerous Times For The Dead and is once again released independently on all available streaming channels. In the “Storm The Castle” review, I’ve described the band’s sound as a blend of legendary classic metal acts like Iron Maiden, Dio, Judas Priest and Black Sabbath and “The Cats Of Ulthar” is certainly no exception.
The song is slow and menacing with a marching main beat, groovy, Black Sabbath like guitars and howling, Danzig inspired vocals. It’s a very nice, straightforward tune without any big surprises and Dangerous Times For The Dead’s usual catchiness in its melodies and lyrics is still here. I do have mixed feelings, however, about the meows in the song’s chorus. On the one hand, meowing in a song about cats is cheesy as hell, but on the other hand, the way BjØrn does it is quite catchy nonetheless.
Once again, Dangerous Times For The Dead has made a tune that’s quite different compared to their earlier released material. Older singles like “Power Management” and the aforementioned “Storm The Castle” focused on speed and power metal while tunes like Dangerous Times For The Dead’s eponymous single were thrash metal focused. Maybe next time they can do something Motörhead inspired, with a ton of bass and speed. Might be something fun to do. The song’s title and themes is based of the horror short story “The Cats Of Ulthar,” written by the legendary H.P. Lovecraft. The story is about an old couple living in the small fictional town of Ulthar and who kill all the local cats. Things turn bad for the two old-timers however, when a group of wanderers come into town and invoke a mysterious prayer. That prayer causes the remaining feline population of Ulthar to attack, kill and devour the cat-killing couple in their own house.
“The Cats Of Ulthar” single describes the events of the short story from the perspective of the same unnamed narrator as in said tale. The song itself doesn’t describe the horrors of the story in much detail, but keeps things rather implicit and therefore make the song’s atmosphere even more creepy.

7,5 Lovecraftian cats of 10. While not my favorite Dangerous Times For The Dead song, “The Cats Of Ulthar” is a very enjoyable old-school metal song that we highly recommended to all Danzig, Black Sabbath and H.P. Lovecraft lovers out there. Here’s the single!