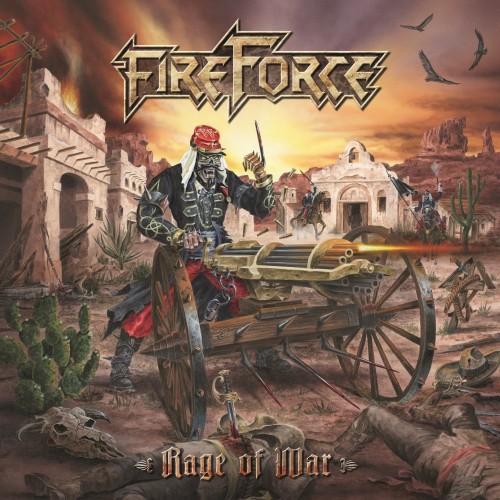 FireForce is a band I’ve been following for half a decade now and their 2nd album, “Deathbringer,” was one of the very first albums I reviewed here on this website (read it: http://belgianmetalshredder.be/reviews/31). I also did a lengthy interview with them in 2016 (read it: https://www.belgianmetalshredder.be/interviews/14). Although I didn’t review their 3rd album, “Annihilate The Evil,” I’m going to draw my Shredder claws for this band’s long anticipated fourth full-length!

“Rage Of War” is the fourth album from the Belgian combat metal band FireForce, released via the Greek record label Rock Of Angels Records and sent to us by our longtime friends over at Hard Life Promotion. What’s combat metal, you may ask? Well, take the catchy and operatic melodies of power metal with the speed and roughness of thrash metal, add to that themes of battle and warfare and you’ve got a pretty good idea of what combat metal is all about.
And those combat metal vibes start off immediately with the album’s title track, with galloping drums, catchy melodies, sweet solos and rough yet smooth vocals, occasionally backed by banshee-like shrieks. The next track “March Or Die,” is slower and more reminiscent of classic FireForce with the anthem-like chorus and the various soaring guitars. The album’s third track, “Ram It” was released as its debut single and for good reason. It’s a beautiful showcase of FireForce’s musical flexibility with catchy vocals and melodies combined with frequent frantic speed-ups.
Next up is “Running,” a simple yet effective tune that, like its title says, features running rhythms but things slow down to a sober and intimate pace with the follow-up “Forever In Time.” An unusual track in FireForce’s discography but a very welcome cooldown. The pace gets frantic again with the next song “108-118.” Definitely the fastest tune on the album and one track that will certainly evoke quite a few mosh pits once the band gets the chance to perform this baby live. “Army Of Ghosts” is another typical FireForce track with thrash beats for the stanzas and slow, power melodies for the chorus.
Then comes the first of 3 CD exclusive tracks, “Rats In A Maze” features a marching main beat with a menacing undertone. Next up is the second of the CD exclusive tracks, “A Price To Pay,” a similar tune to its predecessor, but faster paced and with higher vocals, a slightly more power metal vibe and some evil laughter in the background. Then comes the final track that’s on all versions of “Rage Of War,” and that song’s called “From Scout To Liberator.” A badass tune with has a sweet rock n’ roll feel alongside the usual FireForce ingredients. Then comes the final of the 3 CD exclusive tracks, “Blood Judge.” The best of the 3 CD exclusives in my opinion thanks to the bashing drums and the attention-grabbing chorus! And finally there’s a vinyl exclusive track “Tale Of The Desert King.” A song with an Egyptian theme and melodies that just belong in a swashbuckling adventure like the Mummy or Indiana Jones. Although it sounds much different compared to all the other songs, it still is a nice little extra.
Compared to FireForce’s earlier albums, in this “Rage Of War” album the band puts more emphasis on heavier and faster riffs compared to the more power-focused tunes from old. That is not too say that FireForce’s sound changed a lot, after all, guitarist Erwin Suetens’ signature barrage of expressive guitar solos are still here along with the band’s usual war themed songs and their aggressive musical attitude. Of course, longtime FireForce fans are aware that the band has had a couple of lineup changes in the past few years. Most significantly the departure of Filip “Flype” Lemmens, who is now replaced by the young but experienced French guitarist and vocalist Matt Asselberghs. Compared to Filip’s high-pitched, Judas Priest inspired vocals, Matt has a lower pitched voice and is more consistent in terms of range. And to be honest, I feel that Matt’s vocals feel more suitable to this rawer iteration of FireForce. While the artwork of some of FireForce’s earlier albums didn’t quite give an accurate representation of the band’s themes, I’m glad to say that the artwork of “Rage Of War” is the band’s best looking and most accurate (in terms of music and themes) thus far! “Rage Of War” colorful artwork shows an Old West town with an undead soldier (who looks like a mixture between Iron Maiden’s Eddie, a militia soldier and Marvel comic book character Wolverine) shooting a brutal looking gatling gun while the ground around him is littered with bodies.
Probably you’ve already realized it by now but FireForce’s new album is, once again, about war and all the things that come with it. Marching towards the battlefield, running across the frontlines, fire from tanks and machineguns, trench warfare, etc. Although FireForce presentation of war isn’t as upbeat as in a band like Sabaton, it isn’t all that dark and gloomy either. Like the band’s style, the atmosphere of FireForce’s material strikes a fine balance between high octane tunes and darker undertones.

I really love tracks like “March Or Die,” “Ram It” and “Firepanzer” since they are all awesome anthem tunes in par with other FireForce classics like “Coastal Battery,” “Deathbringer” and “The Iron Brigade.”
The weakest tracks are 2 of the 3 CD exclusive tracks, specifically “Rats In A Maze” and “A Price To Pay.” Both lack the punch of the album’s main songs, still, it’s great that the final CD exclusive track, “Blood Judge” more than makes up for this.

9 Firepanzers out of 10. With their 4th album FireForce further refined their delicately balanced cocktail of power and thrash metal. If you enjoy war themed power metal bands like Sabaton but wish they packed more speed and rawness then you’ll own it to yourself to check out this huge, tasty piece of combat metal! “Ram It!”