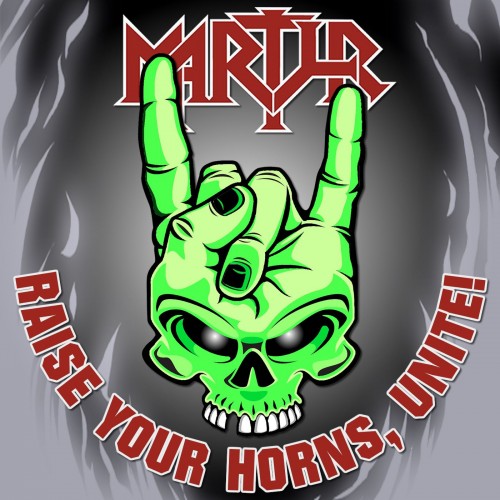 I was passively aware of Dutch heavy metal pioneers Martyr for some time but it was only since Summer 2019 that I got to know this veteran band for real when guitarist and founding member Rick Bouwman personally contacted me to check out his band’s freshly release live album “Live In Japan” and in promotion for that release he requested me to shred him (read that interview here: http://belgianmetalshredder.be/interviews/120). Ever since, Rick and I kept in touch with each other and now he has sent me “Raise Your Horns, Unite!” The third single of the upcoming Martyr album. Let’s shred this one quickly and efficiently!

“Raise Your Horns, Unite!” is the third single of Martyr’s upcoming sixth studio album and is powered by PT-78 Records & Rock Stakk Records. Compared to Martyr’s earlier singles, “Fire Of Rebellions” and “No Time For Goodbyes,” “Raise Your Horns Unite” is a faster and more anthem-like tune, just like the single’s title suggests.
The single begins with piano and a girl’s creepy whispering voice as the single gradually transitions to Martyr’s usual soaring riffs which combine epic power metal melodies with pounding speed metal beats and operatic vocals until the song ends with the same moody piano as it had begun. If you know Martyr’s metal style, then this band’s new tune will instantly sound and feel familiar. And good too. Nothing more and nothing less than a metal anthem to encourage you to look after your headbanging brothers and sisters as we fight our way through the current pandemic. The single represents the people of the metal scene with typical metaphors like being the demons in the dark, the fire in the sky, the riders in the storm. It’s a cheesy theme, but still awesome nevertheless!

8 horns out of 10. A rock-solid speed and power metal anthem which features Martyr’s usual traits of power infused riffs and speedy beats narrated by the usual commanding vocals. Check it out below!