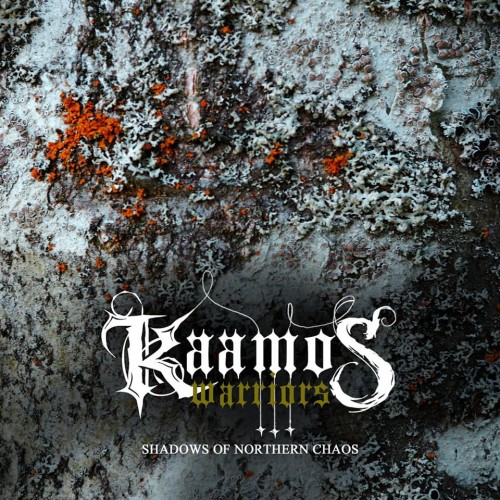 Review written by Glenn “Terra Shredder” Van Bockstaele.
Kaamos Warriors is a Finnish melodic black metal band formed in 2018. I had the privilege to review their 2019 debut “Ikuisen Talven Sarastus” (read that review here: http://belgianmetalshredder.be/reviews/154) and later that same year the band followed it up with a sequel “Shadows Of Northern Chaos.” Once again released through Finnish record label Inverse Records.
First off, there’re no Finnish tracks on “Shadows Of Northern Chaos” unlike “Ikuisen Talven Sarastus” which did have a few songs entirely in Finnish. This new Kaamos Warriors album is all in English. The album begins with the chilling main riff of “Wolves in Storm,” that eventually increases in intensity thanks to the vicious blast beats. Then comes “Chaos Walks the Earth,” which is a more guitar-centered tune with the same blasts and crunchy vocals as in the preceding track but this one does wrap up with a beautiful guitar solo. “Chaos & Mayhem” speeds things up as it’s a short and frantic track that nicely lives up to its name. “Ruined by Plague” slows down to thunderous riffs and dark moody intersections.
The title track of “Shadows of Northern Chaos” is one of the heaviest songs on the album with pounding beats and vicious vocals only cooled down by some ambient piano interludes hearkening back to the more atmospheric style of their previous album. “Where Shadows Grow” also provides a throwback to Kaamos Warriors earlier work, since it’s a longer song wherein the slow, multi-layered melodic riffs are intertwined with chants and acoustics. “Ruins of Hope,” picks up the pace again with faster drums and shrieking guitars and finally the album beautifully ends with “Moon And Stars,” a 4-minute track which is almost completely instrumental (except for one verse and some background roaring near the end) and features a magnificent combo of soaring guitars, acoustics and piano.
Both this album and its predecessor “Ikuisen Talven Sarastus” were written around the same time and I admit that this bothers me a bit. Don’t get me wrong, “Shadows Of Northern Chaos” isn’t a bad release and while the production values are improved there’s little new to be found here. In fact, “Shadows of Northern Chaos” is an overall more streamlined release compared to the debut album. There’s more emphasis on the traditional metal instruments and while those, along with the gruff vocals, are still more than solid, I do feel this album could’ve been more epic. Still, songs like the album’s title track and the excellent finale “Moon And Stars” does show that Kaamos Warriors is still able to crank out some beautifully atmospheric tunes.
While not as lengthy or as original as their debut release, Kaamos Warriors second outing is still an enjoyable release well recommended to those looking for some dark melodic black metal. I’m certainly looking forward to their upcoming third album. Here’s “Chaos & Mayhem.”