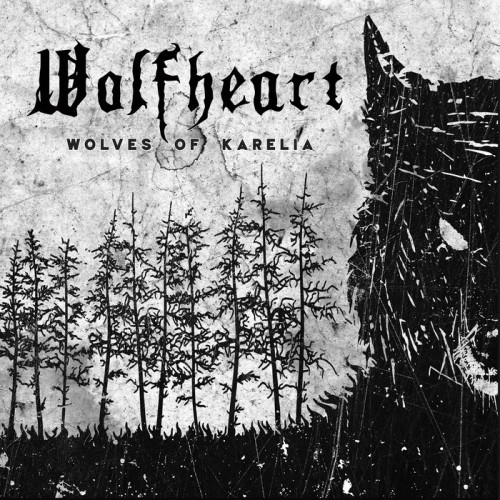 Review written by Glenn “Terra Shredder” Van Bockstaele.
Wolfheart is the solo project of Finnish composer, singer and multi-instrumentalist Tuomas Saukkonen and was formed in 2013 when he decided to retire his then ongoing bands (Before the Dawn, Black Sun Aeon amongst others) and to venture out on his own as Wolfheart. Now I’m ready to review his fifth Wolfheart album called “Wolves of Karelia.” It's a concept album about his hometown of Karelia (located near the Russian border) during the Winter War of 1939 when Soviet troops were invading Finland and all songs are written from the perspective of the poorly trained and vastly outnumbered and underequipped Finnish troops as they fight the relentless Red Army during one of Finland’s harshest winters. The album is released through Napalm Records and sent to us for review by Hard Life Promotion.
The release starts with “Hail of Steel” that was released as the album’s second single. From the get-go you can hear Wolfheart’s unique sound, a combination of drilling blast beats with melancholic riffs, furious vocals and grandiose keyboards and guitar solos. The song tells the war’s beginning and its bombastic yet menacing beats really build up the cold, dark and merciless atmosphere! Then comes “Horizon of Fire,” a faster and much more aggressive track which emphasizes the Finnish army’s determination to hold back the enormous Soviet forces no matter the cost and the song’s upbeat yet ferocious nature puts this on display. The next song, “Reaper,” has been released as the album’s fourth single and has a more doom metal sound with the down tuned guitars yet the song remains fast paced and with some energetic guitar sections that function as a sort of chorus.
Next up is “The Hammer,” the album’s third single and one of the fastest and heaviest songs that Wolfheart has ever written! The song really drags you into the album’s battlefield with the drums shooting like machinegun fire, the guitars acting like artillery blasts, the vocals resembling an army’s battle cry and the ending acoustic guitars signaling the silence and death at the end of the battle! This talent for atmosphere building is one major ingredient of Wolfheart’s musical prowess! “Eye of the Storm” is an instrumental with just acoustic guitar and piano and while the song may sound peaceful the underlying threat and uncertainty for the next battle remains. Then the album moves on to “Born of Fire,” a track that’ll be breaking a lot of necks live on stage because of the song’s awesome riff march that gives you no chance to stand still and it’s all held together by Wolfheart’s typically melancholic sound.
“Arrows of Chaos” tells the tale of legendary Finnish sniper Simo Häyhä, who killed a lot of Soviet soldiers during the Winter War which created much fear among the Soviets and adoration among his Finnish comrades as well as the nickname White Death. The song represents his time in the Winter War with a blend of uplifting fanfare and much darker sections in between! And finally the album ends with its first released single, “Ashes,” a slow song with majestic keyboards and dreary yet melodic guitars. The song represents the end of the Winter War and while the Finnish are glad to have stopped the Soviet aggression they also grief the death and destruction this short but brutal war had caused to their peaceful nation.
With “Wolves of Karelia,” Wolfheart has given us a very compelling history lesson for a war that not only took place in Tuomas Saukkonen’s home region, but which dark winter setting fits perfectly with his orchestral and melancholic style of death metal. Here’s the pounding of “The Hammer!”
90/100