All for one and one for all! 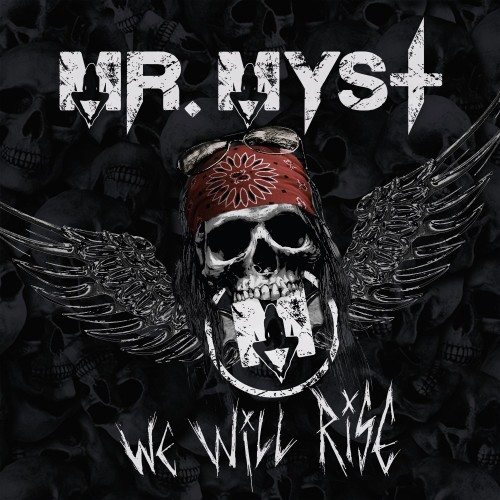 In early 2018 I attended the event Metalworksfest in Kuurne, one band that drew my attention the most the day was the colorful sleaze rock band Mr. Myst. Shortly thereafter, I saw them perform again at Wildfest in Geraardsbergen where I shredded them (read it here: http://belgianmetalshredder.be/interviews/99). Since then, the band and I have kept in touch with each other and founding father Atticus Myst was quick to send me over his debut album “We Will Rise,” which I’m going to shred right now, obviously!

“We Will Rise” is the first full-length release of the Ostend based sleaze rock band Mr. Myst and succeeds their 2018 EP “Red Light District.” “We Will Rise” is released through Greek record label Sleaszy Rider Records (sic).
After a gentle piano beginning backed up by slow guitars called “From the Ashes,” Mr. Myst heads into the very energetic and catchy anthem “Forever and a Day.” The tune has a sweet galloping beat, sharp guitars and lots of joined vocals from JSD, Atticus, Kevain and Josha, making the song a true crowd chant. The next song, “We Will Rise,” is a similarly styled track albeit a bit slower, heavier and more intimate. “Set Me Free” continues the same trend, but has a darker, sleazier feel to it and with more desperate sounding vocals.
The band takes a break from things with a cover of the iconic Roxette song “The Look” and just like their version of Elton John’s “Still Standing” from their previous EP Mr. Myst gives this pop rock song a heavier and more guitar-driven vibe. The band returns to their usual macho catchiness in the next track, “Freak like Me” and gets very bass-heavy and punk aggressive in the song “Backstab.” Finally the album wraps up with the quite hilarious “2FU4U,” which sounds quite like a drunken-man’s anthem, in a funny, tongue-in-cheek way that is, just like the rest of the album.
Summarizing Mr. Myst’s sound and style is quite simple. It’s melodic, catchy, flamboyant with a bit of naughty sleaze and a lot of tongue-in-cheek. JSD’s vocals are full of manly attitude and the backing vocals amplify that. Josha provides crisp bass and Arthur’s drum beats give the songs a tight pacing. Aside from the various catchy anthems I also believe Mr. Myst’s main strength lies in the guitar work. It’s highly melodic and full of lengthy, technical guitar solos and they give the songs so much natural energy along with all the other aforementioned elements.

“We Will Rise” cover features the skull of Atticus Myst with his signature long sleek black hair and red bandana with JSD’s aviator sunglasses on top of it. The skull features large black wings and the band’s logo between its teeth. The cover art is not as colorful as the “Red Light District” EP but the bright red-and-white bandana does give the album’s cover art some of the band’s original’s flamboyance.

I really love the tracks “Forever and A Day,” and “We Will Rise.” Both are catchy and highly motivational anthems and in these dark and uncertain times, we now, more than ever, need some legit motivation to work together as one and build a better future for everyone. Also kudos to Mr. Myst’s excellent cover of “The Look.” Their heavier and more guitar-driven take on this classic pop song gave the song a whole new feel that fits very well with Mr. Myst’s own discography. Any negatives?
Well, the album is not very varied or original and that’s either a good or bad thing, depending if you enjoy the likes of Mötley Crüe, LA Guns or Skid Row. If those aforementioned bands are your cup of tea, then you’ll certainly dig Mr. Myst’s talents, just like I do by offering them…

8 skull bandanas out of 10. While lacking in variety or originality, Mr. Myst clearly makes up for in sheer guitar technique and raw, manly energy. If you’re looking for some passionate, upbeat and catchy hard rock in these turbulent times, then Mr. Myst will certainly motivate and entertain you! It’s time to “Set Me Free!”