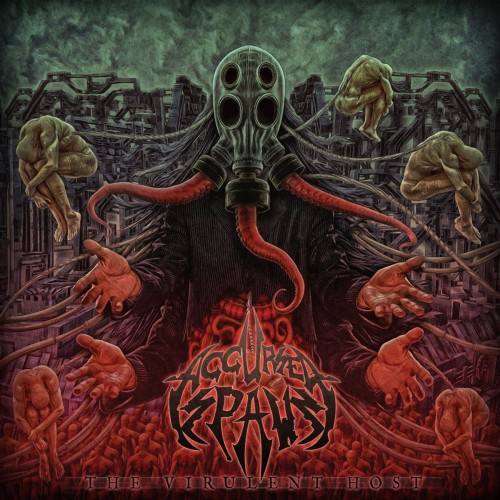 Review written by Glenn “Terra Shredder” Van Bockstaele.
Accursed Spawn in a Canadian death metal band founded in 2010. In that time they released 1 demo and 2 EP's and since last year they’ve got their debut album out! “The Virulent Host” is released via Canadian record label PRC Music and sent to us by our Canadian friends at Asher Media Relations.
And things start off great with “Bhopal’84,” guttural vocals, fast blasting guitars and some insane drum gallops! Then comes “Bloodforged” which cranks up the viciousness even more with harsher vocals and more aggressive beats, a short but very sweet track! “Interrogated Bludgeoning” is one of the longest and most diverse songs on the album, with both furious beats and more melodic parts and various echoing grunts.
Next up is The Virulent Host’s title track, a song in which the relenting blast beats and snarly vocals provide a stark contrast to the much more melodic guitars and solos. The track “Cesium 137” is one of my personal favorites on the album. A variety of extreme vocals, fast, razor sharp guitars, epic solos and pounding drum work! A true gem, which transitions seamlessly into the death metal barrages called “The Ageless Curse” and “Shotgun Facelift.” Finally there’s “Mass Glossectomy” featuring some of the most vicious vocals and blast beats on the album and
All in all, Accursed Spawn has made one hell of a debut album that ticks off all the necessary classic death metal boxes and the touch of deathcore makes the whole package even more brutal! Well-recommended to all extreme metal addicts out there! Here's the music video for the album's title track!
80/100