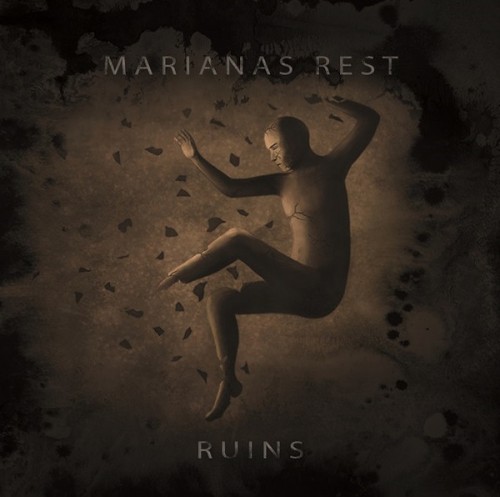 Review written by Glenn “Terra Shredder” Van Bockstaele.
Marianas Rest is a Finnish melodic doom/death metal band formed in 2013. They debuted with the album “Horror Vacui” in 2016 and now they’ve released their next album “Ruins” through the Finnish record label Inverse Records.
The release starts off with the 8-minute long “Kairos” and the highly melodic style of Marianas Rest quickly becomes apparent with slow, atmospheric melodies mixed up by furious death metal riffs, crisp bass and all narrated by naturally sounding grunts. The second song on the album, “The Spiral” gets even darker, with plenty of whispers, growls and screams and even more shrieking riffs. “Hole in Nothing” adds much more ambient sound effects to the death/doom melody mix and “The Defiant” features some of the most stunning guitar work on the entire album!
“Unsinkable” features more snarly vocals backed up by the usual beats and “Shadows” goes full on doom metal with ambient keyboard tunes further increasing this song’s gloomy atmosphere. Then comes “Restitution,” a hybrid track that features upbeat riffs, an epic middle part and a screaming, blast beating finale. Finally the album ends with “Omega,” which has a ton of lengthy, beautiful guitar solos which, along with the album’s typical melodic doom/death traits wrap up this release perfectly.
Overall, Marianas Rest uses a great blend between the powerful death metal and the atmospheric doom metal sounds. They’ve created a very heavy and multi-layered sound with orchestral touches, flexible vocals and the ambient sections give plenty of chances for you to rest and enjoy this album’s complexity. Here’s “Restitution.”