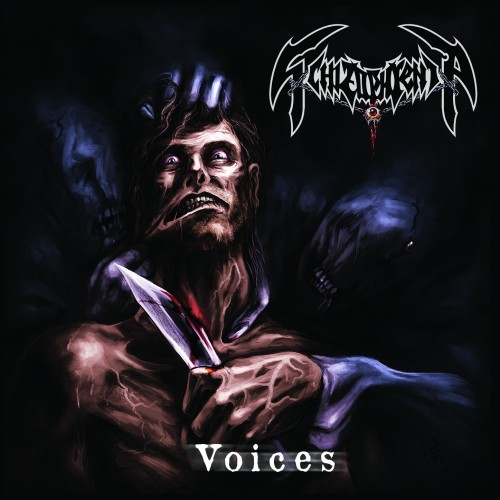 Back in 2016 I had a shred with the Belgian heavy metal band Speed Queen (https://www.belgianmetalshredder.be/interviews/41) wherein they mentioned their touring mates Hämmerhead. While I didn’t have the opportunity to shred Hämmerhead, I quickly heard thereafter that they had rebranded themselves as Schizophrenia and that this year they would be touring with Spanish thrashers Angelus Apatrida and our country’s speedsters Evil Invaders. Well, said tour starts today, so let’s shred this Schizophrenia quickly and efficiently! As always!

“Voices” is the first EP of the Antwerp-based thrash/death metal act Schizophrenia (3rd EP if you include the 2 EPs they had brought out when they were called Hämmerhead). It’s an independent release sent to us by our German friends at All Noir. This 20-minute EP begins with “Structure of Death,” a viciously pounding thrasher with crisp, raging vocals, shredding riffs, occasional tempo changes and some beautiful guitar wizardry. A great intro for this release!
The next song, “Perpetual Perdition,” goes along pretty much the same way, a lot of technical riffage with frantic drum beats and clear, naturally raw sounding vocals! The EP’s third track, “Mortal Sin” is slower and more melodic with a ton of bass groove along with the other aforementioned Schizophrenia elements. Schizophrenia’s eponymous song is a beautiful song with a marching main beat going back-to-back with plenty of rhythm switches and finally the sweet “Beyond Reality” wraps it all up with one final thrash/death metal frenzy before closing the door on this release, literally!
Overall, Schizophrenia’s debut EP feels like a passionate throwback project to such iconic acts like Death, Morbid Angel, Demolition Hammer and Slayer. Five vicious combos of scorching thrash riffs, ferocious drum work, snarly death metal vocals, technical guitar solos and a bit of prog metal sprinkled throughout. Nothing more, but certainly nothing less!

The front cover of the “Voices” EP shows a shaggy guy with a lunatic look in his eyes slicing open his own throat with a Rambo-sized knife while two black, faceless ghouls with huge teeth hold up his head and knife-wielding arm. It’s a striking visual representation of the mental condition which inspired Schizophrenia’s band name. The lack of control the patient has over his/her own actions and emotions, the feeling of being controlled by something other than yourself, very haunting stuff.

My top pick goes to the EP’s epic opening track, “Structure of Death,” the song instantly begins with galloping thrash and death beats and then goes on with convincing vocals, a beautiful guitar solo and a string-tight rhythm section! That’s exactly how an opening song should be, a tune which gives you an accurate first-look of what you’ll be in for and makes you begging for more. Speaking of more, I simply want more of this schizophrenic madness!

8,5 mind ghouls out of 10. Schizophrenia takes all the necessary ingredients of old-school thrash & death metal and gives this freshly made cocktail one short but powerful shake! Fans of such acts like Demolition Hammer or our country’s very own Evil Invaders should certainly check out this thrashing “Structure of Death!”