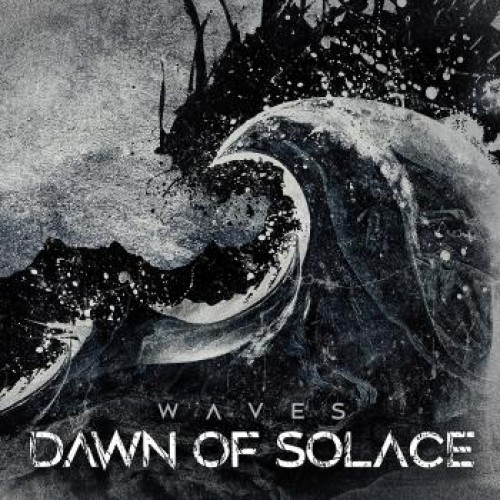 Review written by Glenn “Terra Shredder” Van Bockstaele.
Dawn Of Solace is a Finnish melodic gothic/doom act founded in 2005 and is the solo-project of Tuomas Saukkonen, from Wolfheart and Before The Dawn fame. In 2006 he released the Dawn of Solace debut album called “The Darkness.” Although Tuomas had initial plans to make a second album he decided to kill all his ongoing projects in 2013 and then formed Wolfheart. Last year, however, he announced he was working on a sequel to “The Darkness” and now this sequel is finally here!
“Waves” is Dawn of Solace’s second album and is released through the German record label Noble Demon, founded last year by veteran Nuclear Blast executive Patrick Walch and sent to us by our friendly German promoter All Noir. The album is entirely written and performed by Tuomas himself with the exception for the main vocal duties which are provided by Mikko Heikkilä (from Black Sun Aeon and Kaunis Kuolematon). The album begins marvelously with “Lead Wings,” a song that, despite of the endless barrage of powerful riffs still has a sense of vulnerability to it, especially thanks to Mikko’s slightly melancholic singing and the subtle doom metal layer underneath it all.
That doom metal layer is more prominent in the next song, “Ashes,” which starts off with a grinding main riff and bashing drums before the operatic guitars take center-stage again backed up with some keyboards. This particular song breathes a very foreboding atmosphere, like a series of waves that slowly but certainly gets larger and deadlier and so does this song, gradually building up to an epic finale! The following track, “Silence” is similar to “Ashes,” with a doom inspired first part (this time equipped with some slow, well-suited piano tunes), a bombastic middle part and ending with a minute long soothing piano/drum combo that goes into “Hiding” (the next track, no pun intended) with its acoustic guitars and soft vocals that build up towards a lengthy, magnificent guitar solo.
Then comes the crunchy “Tuli” song, where the bass-heavy melodies, piano and Finnish chants give this song quite some splendor and mystery. The next song, “Numb,” is arguably the most melodic track on the album with several guitar solos and crystal clear vocals, a true highlight on this release. Then comes “Choice,” a typical Dawn of Solace song like many other on this album but with more tempo changes and finally the release ends with “Ghost,” a very atmospheric song with haunting piano ticks and howling vocals.
Overall, Dawn of Solace’s second album is an excellent album that was certainly worth the 14 year long wait. It takes some of doom metal’s ingredients and cranks it up with soaring guitar work and operatic vocals. If you’re a fan of Tuomas Saukkonen’s other bands like Wolfheart then we can just as warmly recommend you his Dawn of Solace. Now fly with those “Lead Wings!”
85/100