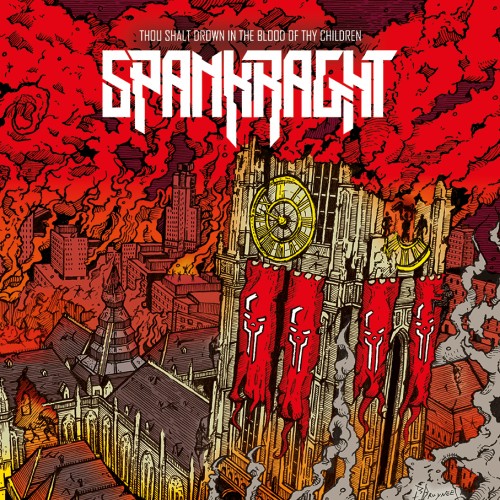 In 2018 I’ve first got into contact with the Belgian industrial metal duo Spankraght when the band contacted me personally to take a look at their eponymous debut EP. While I didn’t write a review for that release, it did serve as a very fun first encounter and I did play the song “Enjoy” on BELGIAN METAL SHREDDER ON AIR, but now, it’s finally time to shred this intriguing act for real!

“Thou Shalt Drown in the Blood of Thy Children” is the first album from the Antwerp-based industrial metal act Spankraght, released independently and sent to us by our long-time friends and partners at Hard Life Promotion. The album starts with “Synopsis” which features a couple of news reports and a demonic monologue that all set up this album’s apocalyptic setting as well as showing the band’s use of heavy instruments with upbeat electronic tunes as the song gradually increases in intensity and complexity. And then the album begins for real with songs like “Reset Mankind” and “Carnivale” being fast-paced and energetic tunes that blend head-banging guitar riffs with electronic beats that are very fun to dance to!
Then the track “Hoop” enters the fray, featuring a Dutch monologue telling about the birth of a child which brings hope to mankind, represented by a joyful keyboard melody. But the happiness doesn’t last long, as the song slowly takes on a more aggressive tone backed up by grinding guitars as the narrator continues his story, telling how the newborn child got abducted by the bloodthirsty invaders and how he and his comrades are preparing to get her back. Next up is “Resilient,” a fun industrial rap metal song with a powerful chorus and epic guitars and keyboards. “Slaughtered” continues the usual Spankraght trend but features a beautiful contrast between the song’s two vocalists (more on that later). And finally the 11-minute long “Exodus” begins very hectic and eventually cools down towards a gentle piano finale.
I can easily describe Spankraght as industrial metal but the band offers plenty of variety throughout the album. In addition to the usual mix of guitars and keyboards the band also employs other instruments like turntables, custom percussion, samples and piano. In addition, all songs on the album have at least one guest star, serving as either a narrator or a vocalist. Guest stars include Franky DSVD (Channel Zero), Evy Verbruggen (Elusion), Zak Tell (Clawfinger), Alex Agnew (Diablo Blvd.), Axl Peleman (De Kreuners) and many more. The result is a plethora of vocal styles, including thrash metal, rap, power metal and hardcore punk.
Overall, Spankraght’s sound feels similar to Mick Gordon’s iconic soundtracks from DOOM (2016) and the upcoming DOOM Eternal! It’s a delicate yet highly balanced and tasty cocktail of raging metal beats with operatic electronic beats, all harmoniously played alongside each other without any element dominating the other. The album breathes a dark yet hopeful atmosphere comparable to that of, once again, DOOM. In DOOM, you may be knee-deep in the dead, fighting the infernal forces on Phobos, Deimos, Earth, Hell itself and beyond. You may be constantly surrounded by pain, misery, hate, darkness, death and destruction, but you’re still having one hell of a great time ripping and tearing through this inferno because you’re confident in your strength and abilities to reach the shores of Hell and turn the tide for mankind’s survival! One shotgun blast at the time!

And speaking of DOOM (again), “Thou shalt drown in the Blood of thy Children” has a very similar setting to the DOOM franchise. Mankind, after centuries of dominating the planet and flushing through its natural resources, suddenly gets under massive attack by unknown, hostile creatures that create death and destruction on a global scale! Slaughtering millions of people and kidnapping entire families whose children get sacrificed and forcing their parents to drown in their freshly shed blood! However, not all is lost for mankind, as a child is born. The birth of this girl gives the surviving population a glimmer of hope but the demons manage to kidnap her and this causes an even bigger conflict between the remaining humans and the hellish creatures. The album ends in a cliffhanger as the humans work together for one last, desperate attempt to bring the child back home.
Personally, I really like the album’s colorful, comic-book inspired cover art, with the image of Antwerp and its beloved cathedral engulfed in red smoke and hellish flames. It reminds me of the epic album covers of bands like Iron Maiden and the equally epic video game cover arts from the 16-bit era (the time of the Sega Mega Drive & Super NES console wars). I wish this style of cover art was more prominent nowadays because it looks much more unique and appealing than a generic band logo or yet another image of a Master Chief like super soldier.

I take “Reset Mankind” as my favorite track on the album. It’s an excellent introduction to this release and to Spankraght’s sound with its frantic pace and excellent marriage of metal and electro. No song on the album sticks out like a sore thumb, so let’s instantly move on to the final judgment!

8,5 Doom Slayers out of 10. Spankraght’s debut album is an ambitious and varied release captained by two guys with a genuine love for shrieking metal riffs, dancing electro beats and DOOM! So check out this album before the apocalypse really comes knocking at our doorstep and before we’re all forced to “Reset Mankind!”