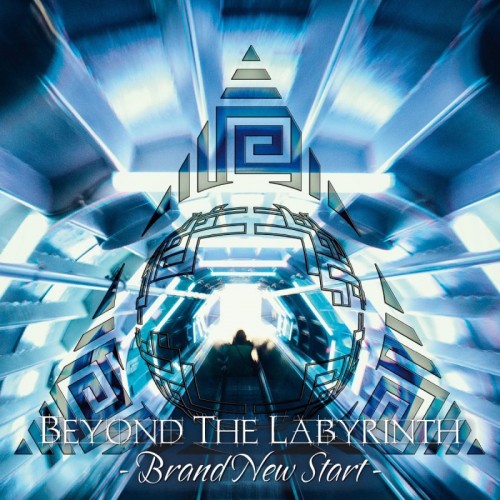 My first encounter with Beyond The Labyrinth dates back to early 2017 when my friends at Hard Life Promotion had sent me the band’s ambitious and awesome fourth album “The Art of Resilience” (my review of that masterpiece: http://belgianmetalshredder.be/reviews/66). During that year’s Christmas holidays I eventually met the band in Ghent during a beautiful end of year show where I shredded them personally (the resulting interview: http://belgianmetalshredder.be/interviews/93). And now Beyond the Labyrinth have released their first EP and of course Hard Life Promotion was quick to send it over to me. My shredder heart is pumping already!

“Brand New Start” is the first EP release from the Belgian classic hard rock band Beyond the Labyrinth after releasing 4 consecutive full lengths between 2005 and 2017. The EP is released through Dutch record label Freya Records and consists of 4 tracks for a solid 18 minutes of playtime. Compared to their earlier releases, Beyond the Labyrinth now goes for a more streamlined and highly melodic hard rock style while still retaining their usual sense of melody, cinematic keyboard tunes and catchy vocals. The EP only has one new song (which is the title track) as well as 3 songs from earlier releases, which are the 1997 written song “Shine,” the fan-favorite “In Flanders Fields” from the 2005 album “Signs” and finally the track “Salve Mater” from their latest album “The Art of Resilience” from 2017.
Of those 3 vintage tracks it’s “Shine” that has seen the biggest transformation. While the original was a pretty bare-bones song (although Geert did a sweet job with the vocals), this new version is faster-paced and puts much more emphasis on the keyboards, creating a more energetic experience, which I believe had always been Geert’s intention with that particular song back when he had written it 22 years ago. “In Flanders Fields,” now has gentle raindrop sound effects added to the mix (further adding to the song’s already brooding atmosphere) as well as much more emotional vocals and finally the horror-themed “Salve Mater” also features improved vocals (more moaning and therefore better suitable to this song’s macabre feel), more powerful sounding organs and a couple of additional samples to bring the dark mental asylum setting even further to life.
However, the biggest change compared to the band’s earlier material is the inclusion of frontman Filip Lemmens. Filip is best known for his work with bands like Double Diamond and FireForce and I was pleased and interested when he was revealed as Beyond the Labyrinth’s new full-time singer. As always Filip brings his signature high-pitched notes to the table, but compared to his earlier bands his vocals is now slightly slower and much more soothing, like a father figure consoling his children. The operatic rock style of Beyond the Labyrinth fits very well with Filip’s equally operatic vocals and I’m very curious to hear what magic he and his new music colleagues will be conjuring in the near future.

Like the EP’s title hints at “Brand New Start” is all about learning from the triumphs and mistakes made in the past and looking positively towards the future. And to that end, the EP’s cover art shows a metallic blue tunnel with a bright white light at the end and Beyond the Labyrinth’s signature triangle emblem in the middle. Sure, it looks like a tunnel, but it could also be the interior of an x-ray scanner or a sun tanning bed, a hallway of the Death Star from Star Wars or a rolling stairway to heaven. Who knows, you may see something else in it.

Certainly the EP’s title track, “Brand New Start” is a fast, upbeat and badass song. With its heavy use of keyboards combined with the joyful guitar riffs and motivational lyrics this is certainly a tune to sing and dance along to! It has a huge Deep Purple vibe and me being a huge Deep Purple fan I was instantly hooked and I also had the honor of seeing the band revealing this epic track live at the Metal for Angels festival in late 2018!
The EP’s only “flaw” (in my opinion) is that only 1 out of its 4 tracks is an original tune. Personally I would’ve loved to have a couple additional original songs, but then again, having those 3 classic Beyond The Labyrinth’s songs rerecorded with the new line-up, style and vocals do give those old tunes a different and refreshing feel. That being said…

8 heavenly stairways out of 10. While Beyond the Labyrinth’s first EP doesn’t offer much in terms of original material, I’m very pleased with both the old and new stuff they’ve (re)released here. “Brand New Start” serves as a fresh new take of classic BTL stuff for die-hard fans and as a splendid introduction for newcomers! A brand new start indeed! Here’s the title track, 100% mobile friendly!