23 years in the making 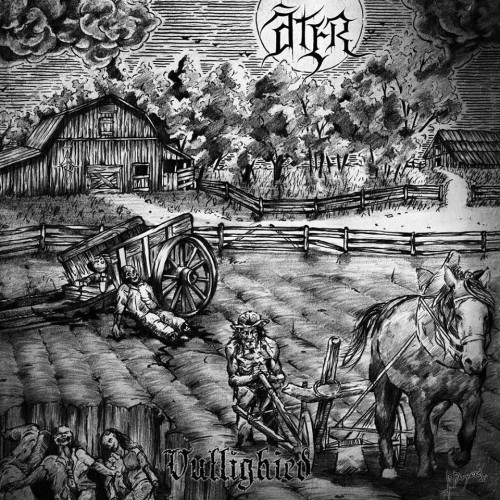 Review written by Glenn “Terra Shredder” Van Bockstaele.
Ater is a Belgian old-school black metal band that first saw the light in 1996, originally as a solo project by extreme metal musician Wesley Beernaert. Whose past vocal experiences include such bands like Fabulae Dramatis, Persephone’s Blade, Satyrus and Lemuria. The songs on Ater’s debut release were written between 1996 and 2004 with the material originally being recorded somewhere around 2004. However, a major flood ravaged Wesley’s home and resulted in all the recordings apparently destroyed. Years later, Wesley found an old hard drive used during the recording sessions and managed to recover the 4 songs which are featured in this EP. Enough history class! Time to shred!
"Vullighied" was directly sent to us by its founding father Wesley and features the original 4 songs that aside from remastering and some newly recorded bass and guitar parts remain identical to what Wesley and session guitarist Mantorok had recorded all those years ago. And it shows in the dry and muffled production of this EP. Now, whether you enjoy the DIY style from 90s underground black metal is entirely up to you (and in fact Stijn “Metal Shredder” does have a taste for those primitive production methods), but personally I wished that Wesley had put some extra effort in making the songs clearer because the songs and his and Mantorok’s performances in general are spot on!
Ater’s style can best be described as old-school black metal similar to the likes of Darkthrone and Mayhem with the usual blast beats, nail scratching guitar riffs, shrieking vocals in the background and little traditional song structure. However, there still is a healthy chunk of melody in the songs, particularly in the tracks “d’Oere,” “Valkennacht” and “Voorvaderen,” the latter reminding me a lot of Cradle of Filth. And the whole release evokes a dreary, pagan countryside atmosphere especially with the songs being about such joyful topics like prostitution, hatred between different ethnic groups and cleaning the filth of the downtrodden streets.
And Wesley convincingly shrieks and screams his way through the four main songs of the EP. In addition, he sings in an old Flemish dialect, native to Wesley’s home region of Anzegem. Obviously this being classic black metal, the vocals are barely intelligible, but they do possess a certain raw charm. In addition to the original 4 restored songs, the EP also features the bonus track “Diatomacious Ooze.” A 4-minute cocktail made of industrial, symphonic, death and black metal ingredients resulting in an orchestral and highly dramatic horror inspired tune. Quite a fun(ny) ending overall.
Aside from the butchered production, this first taste of Ater is still more than enjoyable! It ticks off all the necessary black metal boxes with plenty of blood, guts and screams and since Ater has now transformed into a fully fledged band (starting a new era of Ater, as Wesley himself proclaims), me and the other Shredders are more than interested in seeing how this new Ater will be. But in the meantime, here’s the “Valkennacht” track.
70/100