End Of All Hope 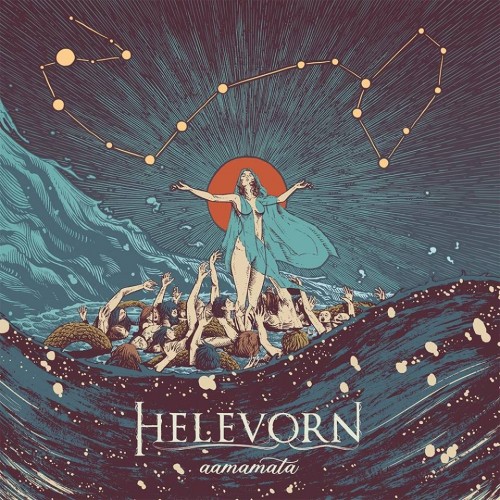 Review written by Glenn “Terra Shredder” Van Bockstaele.
Helevorn is a Spanish doom gothic metal band formed in 1999. Since then they’ve released several albums with this “Aamamata” being their fourth full-length. The album is released through Russian record label BadMoonMan Music (subsidiary of Solitude Productions, also from Russia) and sent to us by our Canadian friends at Asher Media Relations.
The album starts with “A Sail To Sanity” a strong doom track that has a similar feel to Amorphis (their doom material that is). Slow and heavy riffs but with an upbeat symphonic undertone and with Josep’s vocals ranging between crisp growls and natural singing. It also has a sweet catchy main melody that goes along with the howling keyboard tunes. Next up is “Goodbye, Hope.” A more intimate song with soothing vocals and acoustic instruments that diverse with the typical doom metal heaviness and guttural sounds. That same style and vibe continues in “Blackened Waves.” Another tune that’s dark, lengthy and heavy as fuck and all without using extreme vocals, samples or other gimmicks. It all feels so natural and engaging and I’ve had goosebumps from beginning to end.
Then we have “Aurora” that starts with Middle-Eastern chants and instruments before the bass oriented doom sound kicks in. Despite the gentle opening and Arabian Night feel this certainly is one of the heaviest tracks on the album, especially in the vocal department! The following song, “Forgotten Fields” gets me every time, it’s a shorter and faster-paced track but it really rocks the boat! Just let the music take you away! The next song is the experimental “Nostrum Mare (Et Deixo Un Pont De Mar Blava).” It puts much emphasis on piano and features lyrics sung by many different vocalists and in various languages including Greek, Arabic, Italian, Spanish and Hebrew. In addition this lengthy song has a dark orchestral touch and the many different vocals give this song a very exotic and intriguing atmosphere.
The next track, “Once Upon A War” is what I’d call a melodic doom beast. This song just breathes deep darkness with the extensive guitar solos, thunderous main riffs and raging vocals. The penultimate track, “The Path To Puya” mixes Helevorn’s usual melancholic sound with several orchestral set pieces and guest vocals from Draconian’s Heike Langhans all contribute in turning this track into a dark masterpiece. The mystical journey of this album ends with “La Sibil-La.” A meditative song with acoustic guitar and relaxed vocals along with some heavy touches.
One thing I particularly like about Helevorn is how they manage to create an atmosphere that balances between melancholy, symphony and mystery. While Helevorn’s new release is doom metal at its core, they add so many different traits to this subgenre’s sound that it goes well beyond doom metal’s usual borders and so comes out as a masterful album that can be enjoyed by any heavy music lover out there! Now come embrace the darkness with the lyric video for “Aurora.”
85/100