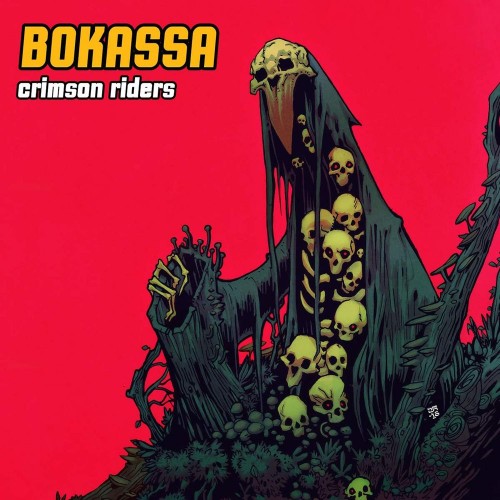 Just like many other rock- and metal-minded people I first heard of Bokassa when they were revealed to be personally chosen and endorsed by Lars Ulrich himself as one of the two supporting acts for Metallica’s European leg of their 2019 WorldWired Tour (the other opening band being Ghost). Last month I eventually saw this young Norwegian band perform in the King Baudouin Stadium for Metallica’s concert there and I was pleasantly surprised by their performance (got to admit, Lars still has some fine music taste). But what surprised me even more was that I was contacted by Dutch promoter Jot Agency to review Bokassa’s new album “Crimson Riders.” Let’s grab a cold one and shred this captain, shall we?

“Crimson Riders” is the second album from the Norwegian stoner punk rock band Bokassa, succeeding their 2017 debut full-length “Divide & Conquer” and is released through British record label MVKA Music.
The Bokassa trio describe themselves as the kings of stonerpunk. Whether you believe this royal title is deserved or not is up to you to decide, but the description of their style is accurate nonetheless. The band meticulously combines elements from both stoner and punk rock with songs like “Charmed & Extremely Treacherous” and “Blunt Force Karma” focusing more on aggressive punk beats and shouting vocals while other tunes like “Wrath Is Love” and the album’s title track are slower, moodier and feel more like traditional stoner. All songs on the album (with the exception of the “Brologue” opening) retain some elements from the other subgenre be it through changes in tempo, riffs or vocal delivery. The band also add several nice twists to their songs. For instance, the album final track “Immortal Space Pirate 2,” has short black metal inspired blast beat sections, “Captain Cold One” is catchy as hell and the track “Vultures” even has a couple of saxophone tunes!
Frontman Jørn does an excellent job vocal wise, he sings in a slightly drunken manner and it adds to the band’s dark yet also humorous atmosphere. During most of the choruses Jørn’s two jamming bros join him as they hum and yell along and it felt very tempting to shout along with them. Especially in the “Captain Cold One” track these “choir” sections are very effective and they help turn this particular tune into an epic stadium anthem! The other two guys also do a very fine job in creating a larger-than-life experience with soaring riffs and well-paced drum beats. Overall, Bokassa’s music has a beautiful connecting quality to it and that’s certainly one of their major strengths. The material on “Crimson Riders” feels like it speaks directly to you and Bokassa is more than willing to let you sing and booze along with them.

The front cover features a clocked figure with a pest mask and several skulls covering his chest! This may sound creepy on paper, but the hand drawn art and the bright colors make it look more like a light-hearted comic book. And in fact, that exactly how I would describe the overall atmosphere on “Crimson Riders.” Dark subject matter, but presented in a fun and colorful tongue-in-cheek style. I certainly like it.

“Captain Cold One” was the first tune I’ve heard from Bokassa and I loved it straight away! It’s a catchy song with funny rhyming lyrics, sharp riffs and powerful beats and an epic sing-along chorus. And thanks to the song’s aforementioned stadium rock feel it was pretty damn awesome to hear and see Bokassa perform this tune in the King Baudouin Stadium. The first of many unforgettable moments from that Metallica event!
I also thoroughly enjoyed the album’s finale “Immortal Space Pirate 2.” It serves as a sequel to the song “Immortal Space Pirate (The Stoner Anthem),” which was the last track on the preceding “Divide & Conquer” album and it’s a beautiful summary of Bokassa’s flexible rock style. An eerie banjo opening followed by anger-filled vocals and frantic beats to eventually cool off with stoner riffs and clean, emotional singing. Great stuff!
The album’s main weakness? I personally felt the opening instrumental “Brologue,” to be a quite useless intro. It’s slow and threatening and it fails as a proper buildup for the energetic “Charmed & Extremely Dangerous” track that follows it. In fact, “Charmed & Extremely Dangerous” does a good enough job on its own to get my blood pumping for this release. No prologue needed, bro!

8 bromances out of 10. While their title as kings of stonerpunk is debatable, I did have plenty of regal joy with this release. Bokassa’s second album is an excellently paced and crafted blend of stoner and punk rock made with genuine energy and passion for those subgenres. Whether you prefer your rock straight forward and anthemic, fast and hard-hitting or slow and melodic, the Bokassa bros got you covered! Now grab yourself a cold one and listen to “Captain Cold One.” Cheers!