Back in the flesh 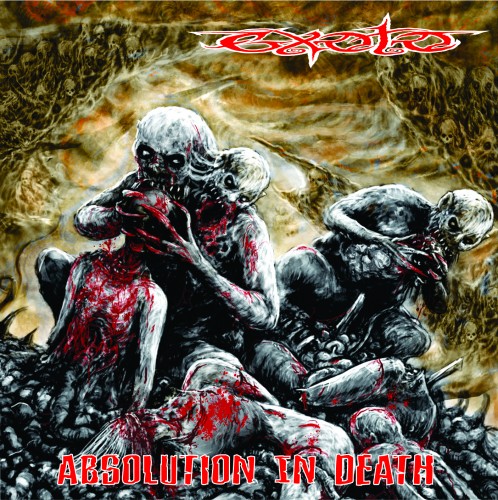 Review written by Glenn "Terra Shredder" Van Bockstaele.
Exoto is a Belgian old-school death/thrash metal band who first came into life as Insomnia in 1989 and then renamed Exoto the following year. Between 1990 and 1996 they released 2 albums before splitting up. In 2013 the band reemerged and released their third full length “Beyond The Depths Of Hate” in 2014 before splitting up again. Eventually vocalist and founding member Chris Meynen kicked Exoto back into life in 2016 with a entirely new lineup and after remastering the band’s vintage 1990s material Chris and his new coworkers have released new stuff in this “Absolution In Death” EP. Released through Belgian record label Dead By Dawn Records. Enough history, let’s get down to business!
The EP opens with “Walkers” a short dreamy intro that sets up a relaxing yet slightly foreboding atmosphere that eventually explodes into “When No Dreams Remain!” An aggressive classic death metal track with sharp yet melodic riffs, rhythmic blast beats, sudden tempo changes and Chris’s snarly hissing vocals having a lot in common with those of John Tardy, vocalist of the almighty death metal band Obituary! Next up is “Consumed By Insanity” a faster and more thrash metal inspired tune with plenty of guitar shredding, soaring solos and marching beats while also retaining some death metal influences. Overall, a great track to mosh and headbang to!
Next up is “Liquefy Your Enemies,” a tune that begins with slow thunderous riffs pounding drums and crispy bass and gradually speeding up to a death metal frenzy! Then comes “Floating (To Hell),” the slowest and most melodic song on the EP with only a couple of speedups and exhaling a dark, brooding atmosphere. Certainly one of the EP’s highlight songs! And finally there’s the title track of “Absolution In Death.” A typically Exoto tune showcasing their talent of balancing tight and fast beats with catchy melody. No surprises here! Just a thrash and death match made in hell!
Although Exoto don’t reinvent the death metal wheel with this EP, they’ve taken said wheel and given it a good hard 27-minute spin! The EP’s well produced and provides a great throwback to the old-school death and thrash from 30 years’ past! A meticulously prepared cocktail of thrash, death and melodic metal! Exoto are thrashing, slamming, soaring and spitting out the same excellent stuff they’ve been known for since 1989! So if you enjoy classic acts like Death, Obituary and Cannibal Corpse, then Exoto’s right there up your blood and gore filled alley! Here’s the lyric video for “Floating (To Hell).”
80/100