Snakes on the core! 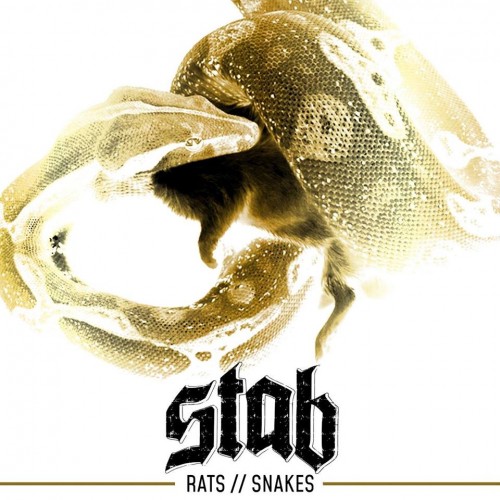 Review written by Glenn “Terra Shredder” Van Bockstaele.
STAB is a Belgian hardcore/beatdown band formed in 2006 and now they’ve brought out their fourth full length called “Rats//Snakes.” This album was sent to us personally by STAB’s guitarist Louis Gürke, thanks a lot, Louis, hope you like this lengthy shred!
The album kicks off with the short “As Real As It Gets.” A slow but heavy pounding hardcore song with a few nice breakdowns. Then comes the real opening track called “Pure Vida.” A song that features a lot of Hatebreed influences. Cleanly shouted vocals, sharp melodic riffs and a tick bass holding everything neatly together. The song also serves a effective showcase of the different vocal styles between Jeroen and Tom. Jeroen’s style is clean hardcore yelling while Tom’s voice is more snarly without been overly harsh. It provides a great vocal dynamic!
Next up is “Propaganda,” a song that begins with brooding guitar riffs and then turning into a tune full of raging vocals and ending with a powerful breakdown! Then comes “Hollow,” a significantly faster and vicious tune that will certainly give you a kick in the teeth, literally! After a weird little dubstep/industrial intermezzo called “Prelude” comes the blood pumping beatdown track “Black Snow,” spiced up with some hardcore influences and vocals that sound even rawer than usual. Then we have the classic hardcore track “Agony” with a guest appearance from Sworn Enemy’s frontman Sal Lococo, whose own snarls fit very well with those of STAB’s own dynamic duo. Track 8 is “Dear Nemesis,” a slower song with particularly crisp bass lines. Then we have “Unstoppable,” a fast and thunderous breakdown and blast beat filled song that will certainly lead to plenty of epic circle pits.

Track 10, “Thorn In My Side” has another guest vocalist, this time Fleddy Melculy and even though he usually sings in Dutch, his high pitched vocals form a sweet contrast to the lower and rawer voices of STAB’s usual spokesmen. Next up is “No Peace,” another strong hardcore tune with STAB’s typically melodic riffs and heavy breakdowns. Then the tracks “No Peace” and “Wolf Among The Sheep” are up, both excellent tracks beautifully showcasing STAB’s main strengths of ferocious but melodic heavy hardcore and the dual raging vocalists. Then comes “Cooking Bones,” featuring one final guest artist, this time Italian-American rapper M-Dot who drops some well suited rap bars. And finally there’s “Borrowed Time,” one final hardcore frenzy that nicely wraps everything up!
With 14 varied tracks, STAB’s latest album is a love letter to all things hardcore! It features epic breakdowns, a variety of raging vocals and pounding beats and is as heavy as hardcore can be! STAB’s one of the main flag bearers of the H8000 scene (extreme metal and hardcore bands originating from West-Flanders) and with a gem like this, it’s not hard to see or hear why. Highly recommended to fans of classic, straight-forward hardcore! Here’s the music video for “Pura Vida!”