Hellish thunder from down under! 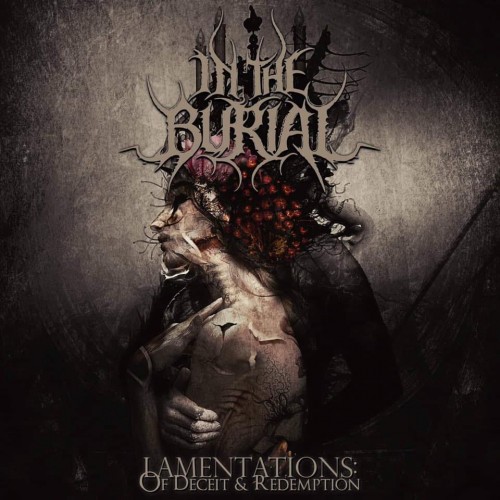 Review written by Glenn “Terra Shredder” Van Bockstaele.
In The Burial is an Australian technical symphonic black metal band formed in 2007. Six years after their formation they released their debut “Born Of Suffering” and now another six years later they released their second album named “Lamentations: Of Deceit And Redemption.” Like their previous album, this is an independent release and it was sent to us personally by In The Burial’s guitarist Mark. Thanks a lot, mate!
The album opens its hellish gates with “The Author And Architect.” With its 8-minute runtime it also serves as the album’s longest track but don’t let that deceive you. The song has sections of orchestra, guitar solos, piano melodies and classic black metal shrieks and blast beats, all combined to create a piece of furious hellish symphony. The band then transitions to “Arise The Heretics,” a more aggressive tune with very harsh vocals and plenty of vicious screams but after the first four minutes the song cools down for an extensive guitar part and finally one last symphonic black metal explosion. Track 3 is “DoSAvastR,” a slower song with a nice Behemoth feel, thanks to the stretched out demonic vocals and the pounding beats. Next up is “Holographic Webs We Weave,” a more symphonic and atmospheric tune with guest vocals from Fleshgod Apocalypse’s soprano Veronica Bordacchini. Then comes “Leviathan,” one of the slowest and moodiest songs on the album, with lengthy piano sections, dissonant guitars and hissing vocals. The songs feels like a slow decent down to the underworld with the drums announcing your arrival and Mel acting as a infernal snake slithering around you as you both plummet into the abyss.
Then there’s “When Dreadful Storms Bring Up Metamorphosis.” The shortest track on this release and wherein heavy guitars play alongside bombastic pianos to great orchestral effect. Then comes another slow burner in the form of “Stark Grey Malaise,” a song that brings in gongs, dreary riffs and demonic growls for a menacing doom metal atmosphere, the track eventually rages on with a typical black metal pace until it slowly burns away. In The Burial’s intensity goes up quite a few notches in the next song, “Remembrance,” a song full of double bass drumming and wherein the melodic guitars and operatic pianos provide a stark contrast to the extreme vocals. The next track, “Severed Earth From Sky,” is one of the most cinematic songs on the album with epic yet threatening guitar work and plenty of blast beats. The penultimate track, “In Linear Lights,” is one last slow song where the usual soaring riffs make room for Mel’s emotionally fueled vocal range which goes from her typical black metal shrieks to clean singing. The album ends with “The Paradox Of Embodiment,” a slow and brooding finale featuring highly melodic keyboard and guitar tunes, clean and harsh vocals singing in duet and wrapping up with both epic guitar and piano solos!
In The Burial’s second album is a long and diverse album. One that beautifully mixes black, death, doom and symphonic metal together in one well-built package. The songs are very lengthy, but the band manages to keep things interesting thanks to the various styles, paces and tones on display in this release. One of the main stars of In The Burial’s sound is definitely vocalist Mel. She has an extensive vocal range that mixes black metal shrieks with harsh shouts, guttural grunts and clean singing. Fans of bombastic extreme metal similar to the likes of Dimmu Borgir or Fleshgod Apocalypse will certainly enjoy this album. I know I do. Here’s “Arise The Heretics.”