Take me to hell, please! 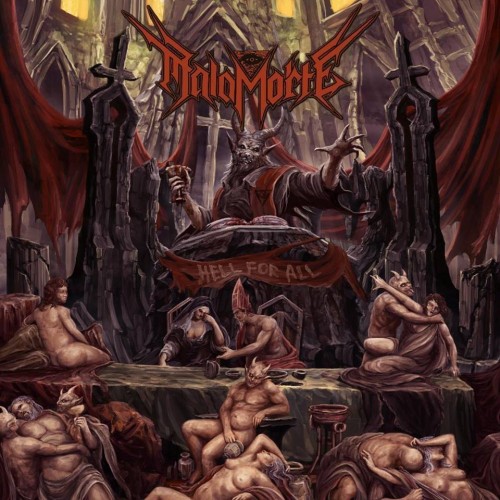 Review written by Glenn “Terra Shredder” Van Bockstaele.
Malamorte is an Italian occult heavy metal solo project from Alessandro Nunziati, better known as Lord Vampyr, frontman of the industrial/gothic metal band of the same name. “Hell For All” is Malamorte’s third album and is released through Italian record label Rockshots Records.
After a short intro of joyful trumpets (followed by the endless screams of the damned), the album kicks off for real with “Antichrist” a song that combines thrash metal rhythms with classic heavy metal vocals and groovy double bass drums. The track has a dark atmosphere without being really macabre and LV’s vocals have soft, whispering feel to them that offers great contrast to the heavy riffs played on this track. Next up is “Warriors Of Hell,” a heroic power metal inspired tune sung from the perspective of hell’s minions as they burn down churches, rape nuns and ring the demon’s “bells.” A catchy party tune that actually makes you root for the side of hell as it causes death and destruction all over the cleric world. Then comes “Holy Or Unholy” another operatic heavy metal tune with smooth vocals, technical guitar work and an energetic drum beat in the middle part where people will certainly clap along to during live gigs and an ending that feels a bit like a retro arcade game.
Track 5 is called “Mother,” a slow, intimate tune with emotional chants and beautiful guitar solos that reminded me of the legendary anthem “Mother” from Danzig. Then comes Hell For All’s title track, one of my favorite songs on the album, thanks in large part to this tune’s epic main riff as well as the anthem chorus and the thrashy middle part. Up next is “Son,” another catchy and upbeat tune that will make you vehemently chant “you are the son of Satan!” just as LV sings, whispers, growls and yells that same infamous line throughout the song. Track 8 is “The Worshipers Of Evil,” a fast and fiery thrasher with an awesome barrage of soaring guitar riffs and blood pumping drum beats at the end. The album’s penultimate track, “Satan’s Slave” features choirs and organ and this adds a flavor of Ghost into Malamorte’s usual dark metal style. And finally there’s “God Is Nothing,” one of the heaviest songs on the album with organ and moaning vocals that give this tune a slight doom metal atmosphere.
AC/DC has a song called “Hell Ain’t A Bad Place To Be” and I must say that Malamorte’s material is a perfect example of that statement. Malamorte’s Hell For All features catchy lyrics, awesome guitar work and songs ranging between heavy, thrash, doom and power! It’s a joyful celebration of all that’s satanic, unholy and sinful in this world. If you dig classic metal bands with satanic themes like Venom, Hell or Satan then you can’t go wrong checking out this Roman demon’s own infernal work as well. Here’s the lyric video for “Warriors Of Hell.”
80/100