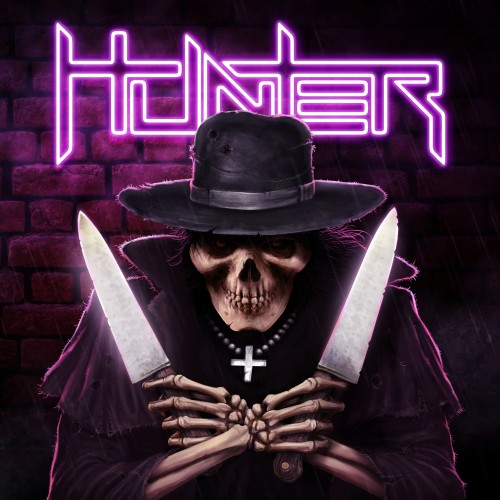 Somewhere in 2018 I was contacted by Hunter’s vocalist David to check out his band by listening to the music video of the song No Man’s Land and I liked it a lot. Finally, in December that year I saw Hunter on the first edition of Pluto Metal Fest and that made me like Hunter a hell of a lot more, so much in fact that I didn’t need much consideration to vote them to the finals of this year’s Wacken Metal Battle Belgium and now to check out their first album. Thank you Hard Life Promotion for sending me this! Now, let the shredding begin, again!

Hunter is the self-titled, independent debut album from the Belgian heavy metal band Hunter, formed in 2016 and consisting of former members from acts like Megasonic, Everglow, Monster Joe and Crusader. Members who, according to Hunter’s official website, all have accumulated over 20 years of band experience. And given the high quality on display in this debut, I think this statement is pretty legit.
Hunter’s main inspirations directly come from classic 1980s metal acts such as Judas Priest, Iron Maiden, Metal Church and Omen. So you can expect a smoothly paced, bass-heavy sound and solid drum lines built over with sharp riffs and catchy vocals. Aside from Jeroen’s groovy bass and Dries’s pounding beats, the real show stealers on Hunter’s first iteration are the twin guitars from Joost and Thomas and the large vocal range from David.
Like the legends that have inspired them, Joost and Thomas offer each song a set of extensive soaring guitar solos that just hearken back to the classic Iron Maiden and Judas Priest albums, it’s just beautiful. And David’s vocals range from soprano to guttural and everything in between. Like everyone else on the album, he takes his cues from singers who made their biggest marks in the 1980s such as Halford, Dickinson and Byford. David has a compelling, story-telling voice with a naturally high but slightly edgy tone that fits perfectly with Hunter’s dark cinematic atmosphere. Very good stuff all things considered!

The band’s mascot, the eponymous hunter, is posing proudly on the front cover, wearing dual machetes and having a devilish smile on his skull face. In fact, he reminds me a lot of Caleb, the bloodthirsty anti-hero protagonist from the cult shooter game franchise “Blood” (check out this game’s recent “Blood Fresh Supply” remaster on Steam or GOG in case you don’t know what this awesome FPS is all about). Just don’t see a lot of bands nowadays having true mascots (Teefus from Belgian thrash act Sulfeet is another modern metal mascot example) and I kind of wish that more bands would create some symbolic character to help them stand out visually.
The themes on Hunter’s debut are mainly dark in nature, with songs dealing about stuff like a demonic apocalypse, dystopian future worlds, World War I and Jack the Ripper. However, most of the tracks are played in an overall uplifting tone, thus making the dark subject matter much easier to swallow and that also gives certain songs a smart two-faced feel. Such as the two tunes I’m mentioning in the next chapter.

The epic “Here Comes The Night” is one of the catchiest songs on the Hunter album and I’m sure the song’s chorus will remain stuck inside your head for a good long time. And another fun thing about this song is that the energetic riffs deceivingly mask the song’s gruesome lyrics which feature references to vampirism, cannibalism and serial killing. And another top tune for me is “No Man’s Land,” thanks to this track having bass lines so groovy that it would make Steve Harris proud! Aside from that this song has an atmosphere that’s both joyful and tragic. It has a marching rhythm, representing the countless young soldiers heading off towards the battlefields looking to kick ass and seek glory only to discover death and misery, represented by this song’s occasional moody slowdowns.
“The Night Of The Black Rose” is my least favorite tune on the release. Clocking in at 5:30 minutes, this is the longest song on the album and while it has some nice melodies and a fun high fantasy narrative,  the song’s length and sometimes painfully slow pace both don’t do Hunter any justice. Hunter is at their best when their guitar riffs soar through galloped along by tightly played rhythms. But hey, a band’s got to try and learn. And this band has already learned a lot about old-school shredding, so this debut gets a great…

8 rippers out of 10. Hunter provides an excellent throwback to the classic, all kills no frills metal from over thirty years past. If you’re looking for some freshly made material that carries similar vibes as the likes of Priest, Maiden or Dio then you can’t go wrong joining these five guys for the hunt! Here’s the music video for “Then Comes The Night!"