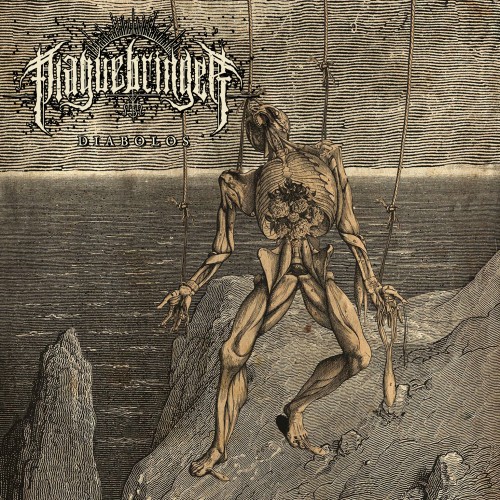 Review written by Glenn “Terra Shredder” Van Bockstaele.
A few months ago we got personally contacted by the Canadian technical death metal band Plaguebringer asking us to check out their 2017 EP “Three Kings” (read that review http://belgianmetalshredder.be/reviews/115). A release which we enjoyed one hell of a lot! Recently the band got in touch with us again, this time to check out their debut full-length. Once again this is an independent release and features all four tracks from the aforementioned “Three Kings” EP along with 7 new songs. In addition to these extra tunes, the overall production values have been kicked up quite a notch for both the old and new stuff! Enough introductory talk, let’s get shredding!
After a short orchestral opening called “Malice” the album begins with “Malificarum,” the same dark epic opening spectacle from the earlier EP. Flexible Black Dalia Murder inspired vocals, ferocious blast beats, multiple guitar solos, a touch of both orchestra and metalcore and thanks to the beefier production this song feels stronger and more multi-tiered than ever! Next up is a new tune called “Curses,” a faster and more straight forward death metal tune but still having that slight orchestral edge and a classic metal guitar solo amidst all this extreme metal chaos. Then comes “Queen Ov Midnight,” another song from the “Three Kings” release and one in which Aaron’s and Roger’s guitar work truly shines as they both unleash bone-crushing riffs and technical melodies.
Track 5 is a new tune called “Starless” and this one showcases Diaro’s absolutely guttural vocals and hellish shrieks as he bites and cuts his way through this song’s riffs and even short organ section. Very often throughout the album he switches between those two styles on the fly and thus giving the illusion that there are two vocalists at work here which is of course not the case! Things cool down a bit with “Under A Desert Moon,” featuring piano and violin along with the typical Plaguebringer elements, albeit playing at a significantly slower but still powerful pace. It also features some clean vocals and guest appearances from Dylan Parker and Kyle Hunter (from modern death metal band Protosequence). Next up is the title track from the “Three Kings” EP, a relatively short tune that just bursts with majestic energy and eventually explodes into your eardrums!
Track 8 is a jazzy instrumental called “Idle Hands.” Particularly the crispy bass lines steal the show along with the pounding drum beats that Greg plays during this tune’s finale. The next song, “Frailty” is another operatic, skin-shredding song and also has a few rare lines of clean singing along with some of the most guttural vocals on the album. Then the album’s two part title track finale comes into play. “Diabolos Pt.1,” is the slower and more melancholic song of this duo-track and features more symphonic elements including a couple of trumpet parts. A piano section transitions us to “Diabolus Pt.2” which is a more traditional Plaguebringer tune wherein the band puts all their raging traits to the table for one last time!
While Plaguebringer already gave me a great first impression with their earlier EP, I’m more than happy to tell you that they’ve vastly improved and expanded on their earlier work with this debut album. If you’re looking for an epic chunk of chaotic technical death metal mixed with black metal, orchestra and metalcore then these fine Canadians here are right up your alley! Here’s the music video for “Maleficarvm!”
90/100