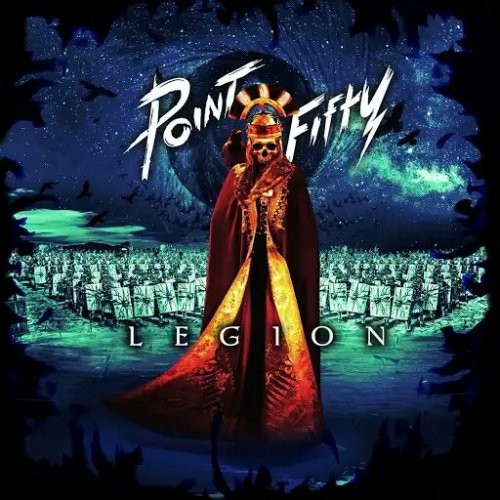 Review written by Glenn Van Bockstaele.
Point Fifty is a Belgian heavy metal band formed in 2013 and mainly inspired by classic NWOBHM acts like Iron Maiden and Saxon but spiced up by a couple of other metal subgenres. Last summer they brought out their debut EP “Legion” and their frontman Lieven was so nice to send us the EP, so thank you very much!
The EP kicks off with “Conqueror” a classic metal song with energetic riffs, groovy rhythms and a touch of stoner. Up next is “Gravel Dragon,” a shorter and significantly faster track, taking its cues from speed metal and Lieven’s smooth and relaxed vocals form a beautiful contrast to this song’s frantic pace and sharp melodies, all wrapped up by epic guitar solo work from Kristof. Then comes Legion’s title track, beginning with a echoing bass line before the other guys join in to create this track’s doom metal inspired main riff. Gradually the song becomes increasingly more intense and this time it’s Thomas’ turn to shine as he closes off the song with a furious set of hard-pounding drum lines. The EP’s fourth track is my favorite of the bunch and that tune is called “Mathilda.” A true headbanger because of the high-octane melodies, the catchy main chorus and of course the pulse-pounding beats holding this gem together. And finally there’s “X Marks The Spot,” ending the album with another powerful stoner metal inspired tune, similar to “Conqueror” but with slightly faster rhythms.

Point Fifty’s first EP is a short but enjoyable set of catchy heavy metal tunes flavored by stoner, thrash and speed metal. They don’t waste time with samples or over-extended songs, but rather go straight to the point (pun intended, obviously) with the basic elements of classic heavy metal. Sharp and catchy riffs, rhythmic drum and bass lines, soaring guitar solos, lyrics that are tempting to sing along to and clean-cut vocals. Nothing more and certainly nothing less. So if you’re looking for some old-school heaviness, then Point Fifty is worth checking out, especially now since they’ve evolved into a five-piece band. Here’s “Mathilda!”
75/100