Melodies from heaven, growls from hell 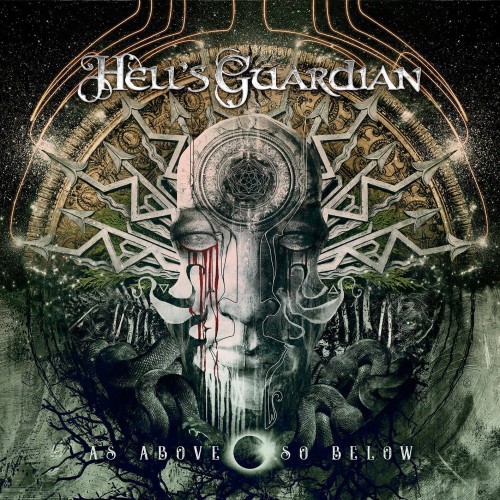 Review written by Glenn Van Bockstaele.
Hell’s Guardian is an Italian melodic death metal band formed in 2009. “As Above So Below” is their second studio album, distributed by the Record Union (from Sweden) and sent us by German promoter Metalmessage Global PR. Thanks a lot, folks! The release kicks off with “Over The Line,” a gentle symphonic warm up with piano and violin before it ventures into “Crystal Door,” a melodic death metal track spiced up with a lot of orchestral elements such as choir chants and the aforementioned violins. Up next is the album’s title track, similar to the preceding song but a bit faster paced (in particular the track’s soaring guitar riffs and galloping drum beats are awesome) and this time having vocalist Cesare smoothly transitioning between clean singing and grunting. Then comes the track “Blood Must Have Blood,” with a bigger emphasis on keyboards alongside another series of grunts and clean vocals singing in duet and of course the always epic guitar melodies. The song as a whole would also fit very well in a classic Castlevania videogame.
Up next is a short, relaxing piano intermission called “Waiting… For Nothing,” before the band swings back to their typically orchestral melodic death metal sound in the song “90 Days.” It’s the longest track on the album and one that beautifully shows off the large but effective contrast between Cesare’s brutal vocals and Dylan’s pounding drum beats on one side and the peaceful, heroic guitar and symphonic melodies on the other side. Then comes “Lake Of Blood,” a track similar to “Blood Must Have Blood” because of its frequent keyboard use and once again that old-school Castlevania feel comes to mind. The album’s eighth track, “Jester Smile,” is one of my favorite tunes on the release. It’s such an epic song, with the guitar riffs soaring through the skies accompanied by the keyboards playing in the background and the grunts and clean vocals roaring side by side throughout this raw spectacle.
Up next is a slower, more intimate track called “My Guide My Hunger,” featuring guest vocals from Adrienne Cowan (vocalist from power metal band Light & Shade as well as symphonic metal band Seven Spires) and Marco Pastorino (vocalist from progressive metal band Virtual Symmetry and melodic heavy metal band Temperance) and I’ve got to say both guest vocalists do an excellent job in making this one of the album’s stand-out tracks because of their very different vocal styles nicely complementing one another. Then comes the song “I Rise Up,” an orchestral song with epic choir chants and even a slight doom metal edge (specifically in the opening and ending parts). Finally the album wraps up with “Colorful Dreams,” one final cinematic melodic death metal track wherein the drums and keyboards play alongside each other in a frantic pace.
Simply put, I had a blast shredding my way through this album. At their core, Hell’s Guardian is a competent melodic death metal band but the extra orchestral elements and the mix of both clean and harsh vocals both help in bringing Hell’s Guardian style to a much higher level. Their second release is one album I can certainly recommend to both death and symphonic metal lovers. Now check out the band’s music video for the “Crystal Door” track!
90/100