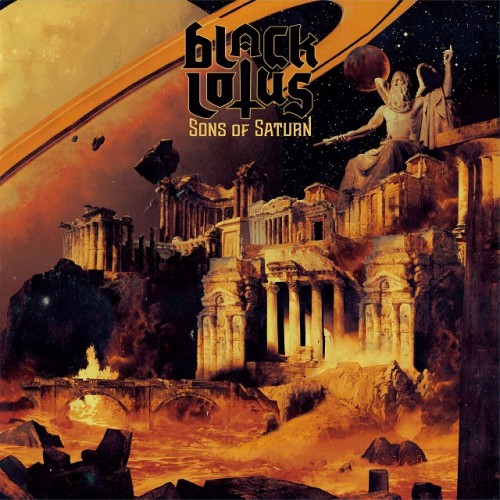 Black Lotus is a Spanish doom metal band formed in 2014. Sons Of Saturn is their debut album and released through Finnish record label Inverse Records. The album opens with a brief but eerie monologue from Indian philosopher Jiddu Krishnamurti telling that fear constantly lurks into the minds of all of humanity. Then the gates of doom open for real with “Kings,” a track that has a huge Ghost feel to it, with the operatic yet slightly threatening vocals and the thunderous riffs and beats but with a bit more emphasis on doom metal. The release continues with “Sandstorm,” a slower and much heavier traditional doom metal song whose 10-minute runtime is well spread between groovy melodies, hard-pounding riffs and epic guitar solos.
Up next is a short instrumental called “The Pyre,” meant as an introduction to the fourth track, “Protective Fire,” but both songs have very different styles making the “Pyre” track not all that effective. “The Prye” is an aggressive doom metal march while “Protective Fire” is faster, more upbeat and sounding more like modern heavy metal. Then comes another short introductory track called “Taurobolium – Intro.” It depicts the ritual sacrifice of a cow and features all the cheesy elements you can expect. Cultists chanting and whispering, the cow moaning cries and finally the sound of its throat being slit open and its blood gushing down to the floor. Atmospheric, but still an entirely pointless filler track.
Thankfully things get better when Sons Of Saturn’s title track comes into play, once again showcasing Black Lotus’s skill to combine doom, stoner and classic heavy metal subgenres for a well paced and cinematic feel. Then comes the album’s penultimate track “The Swamp,” the longest and overall slowest song on the list but thanks to the compelling dual vocals from bassist Christian and drummer Hug combined with the well-timed outbursts from guitarist Charlie and a frantic and melodic finale and you’ve got yourself a more than enjoyable marathon of a track. A great “ending” to the album, but the final track “Return To Erebus” adds one more minute of useless ambient sound effects (this time in a cave setting with water dripping down from its stalactites).
Black Lotus’s debut release is one of ups and downs. On the one hand, the album features lengthy but engaging songs filled with dreary doom riffs, groovy stoner melodies, epic guitar solos and captivating vocals. On the other hand, the album has a couple of useless ambient tracks that serve no purpose at all! Fortunately, those filler tracks are only one-minute intermezzos and since this is a 45-minute release, there still is a lot to love in here. As I mentioned earlier, Black Lotus have multiple strengths and I’m confident they’ll cut out the unnecessary fat in their future releases. Now come and enjoy Sons Of Saturn’s title track!
70/100