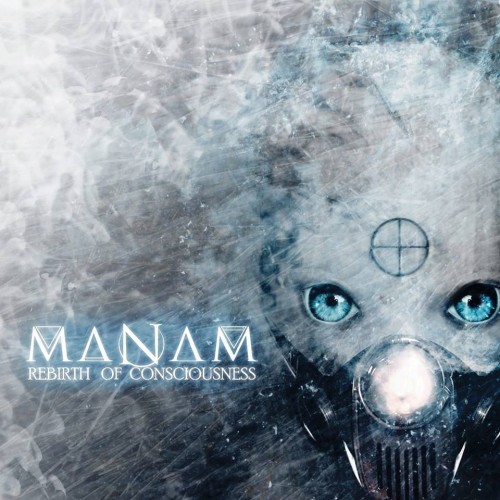 Review written by Glenn Van Bockstaele.
“Rebirth Of Consciousness” is the debut album of Italian melodic death metal band Manam and is released through Rockshots Records. The release starts off with the introductory “Fallen Leaves” that, like the titles suggests, features the sounds of leaves flowing in the wind accompanied by thunder and rain and an acoustic guitar that eventually gets joined by electric guitar, bass and drums all playing the same epic opening melody.
Then the album kicks off for real with the fast and upbeat melodic death metal song “Supernova.” The track combines harsh shrieks and sharp riffs with clean operatic vocals and more power metal inspired melodies, it’s pretty much two different tunes made into one. The third song, “Atman Denied,” is slower and more doom metal oriented and like its previous tune also features clean vocal parts sung by both Marco M. and Marco S. as well as having the latter Marco and fellow guitarist Fabiola showcasing their shredding talents. Then it’s on to “Inner “Demon,” a mixed bag in my opinion. On the one hand it’s an epic track with soaring guitar work but on the other hand the song isn’t as balanced as the other tracks on the album. It’s kind of like the clean and heavy parts are fighting along with the melodic guitars over who gets the most on-air time on this song and as a result, the track didn’t stick that well with me.
Fortunately the next track, “Revelation,” brings back the delicate harmony between the clean and the harsh as well as including a lengthy instrumental part and choir chants at the end of the song. The track also has a more classic heavy metal inspired sound. Then comes “A Total War” that further builds on the old-school style of its predecessor but faster paced. The next track is the lengthy “A Raw Awakening” that begins with a monologue and a gentle acoustic melody before turning into a power metal like tune and finally building up to a hectic extreme metal finale. One of the best songs on this release!
The penultimate track, “Aman,” is another beauty that starts off gently and builds up towards another awesome melodic death/power metal song! And finally there’s “Sahara,” a slowly brooding climax with acoustic guitar, piano and violin and occasional speedups. It’s a very dreamy track and it’s my personal favorite tune on “Rebirth Of Consciousness!” And after getting through that awesome final track I can happily say that, aside from a few weaker moments, this young Italian band’s first album was a more than enjoyable release to shred through! Despite the lengthy tracks Manam did manage to keep me interested as they meticulously combine melodic death metal with artistic power metal, harsh grunts with clean singing. Add to that a ton of epic guitar solos and the highly rhythmic foundations from rhythm guitarist Fabiola, bassist Marco M. and drummer Nicola and as a result you get a rock-solid debut from a very potential band. Manam shows a lot of promise and I hope they can make their next releases feel even more cinematic and grandiose. Here’s the music video for “Supernova!”
75/100