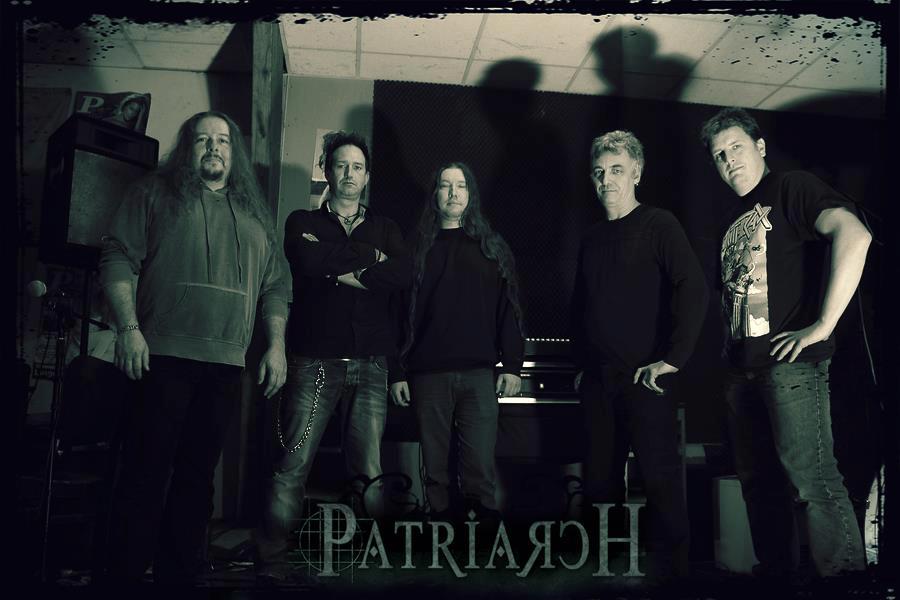 On July 1, 2017 I went to Jeugdhuis Asgaard in Sint-Amandsberg to see Diggeth (who were great), Ziygoma (not really my thing but still a talented bunch) and PatriarcH. The latter is a band that I’ve known for over a year because Kevin, PatriarcH’s vocalist, offered me a copy of their 2016 release Rage Of Gods for me to shred. Which I eventually did. And now it was finally time to shred PatriarcH in person! We talked about the band’s creative evolution during their over 30 year long existence, the making-of Rage Of Gods and Kevin’s exceptionally well “trained” abdominal muscles. Yeah, no BMS interview is complete without a poor attempt at humor! Let’s go, PatriarcH!

BMS: Hi there PatriarcH. You’ve just finished your show. Did you have a good time?

Freddy: Hello Metal Shredder. There was a pleasant atmosphere, there were a good bunch of people present (despite the fact that we were the first band to play here tonight) and everything went according to plan. What more does it need to be?
Kevin: Nothing else, my friend!

BMS: Freddy, you’ve been with PatriarcH since the very beginning. How did the band evolve over the years?

Freddy: In fact this band saw the light of day in late 1983 as Pariah. In 1988 we decided to rebrand ourselves as PatriarcH because we had plans to release our first album but noticed in time that there were two bands also named Pariah (one in the US and one in the UK) that were about to release their own respective debut albums around that time period as well. So we changed our name a little to avoid confusion with those aforementioned acts. Sound-wise PatriarcH hasn’t changed all that much. We still play metal although we’ve added some more progressive and thrash metal elements to our sound.
Kevin: One of the reasons why I love playing with PatriarcH is because we keep on evolving. We constantly review our work to see what we can improve upon. There never is a creative stalemate on the PatriarcH chessboard!
Tweeva: That’s right! It keeps things exciting for both the fans and the band members themselves. We challenge ourselves to come up with more technical and experimental riffs in order to bring the fans on the edge of their seats!
Kevin: Our main priority is to write material that we as a band can fully stand behind. We don’t intend to put out songs for the great masses, we focus on what we want to personally achieve as a band and that is to come up with stuff we enjoy playing.

BMS: That’s a great mentality! Now, last year you released Rage Of Gods! Tell me how that album came to be.

Freddy: Rage Of Gods was a compilation of old reworked material and freshly written songs. For instance, the song Chronology is a song I’ve written years before we recorded Rage Of Gods and is about the passage of time. By My Forbidden Words deals with censorship and how everything you say can be ripped out of its context and used against you. The Red Cord is about how we, as a society, are all connected to one another by a mutual purpose, desire or feeling. That could be love, hate or, in our case, heavy metal! And finally Rage Of Gods’ title track symbolizes the end of the world caused by mankind itself. I enjoy using metaphors in my song writing. It allows for more creative freedom and also because we consider ourselves to be a thinking man’s metal band.

BMS: Very interesting. Stijn, you created Rage Of Gods’ artwork and I’ve got to say it looks pretty damn good. For each song you’ve given a colorful, detailed visual representation of what that respective track deals with.

Stijn: Thanks for the compliment! I studied art and graphic design for marketing purposes. Since Rage Of Gods was self-financed, I offered to do the artwork myself. The devil you see on the front cover is a reference to the humanoid demon featured on the first Pariah backdrop.

BMS: When I first saw the front cover for Rage Of Gods, it made me think of the Lord Of The Rings. The barren, skull-littered landscape and the exploding volcano in the background. Tell me Freddy, for Rage Of Gods you worked together with your son Ruben for the drums and your daughter Laure for vocals on the Into The… track.

Freddy: Ruben’s first time as our drummer was during a successful gig at WizzFest 2014 and he offered us to drum for Rage Of Gods since we were lacking a good drummer at the time of recording. He drummed for most of the album’s track except for The Red Cord where Luc took over because Ruben became injured after a painful fall off the stairs. As for Laure, she already had experience as a vocalist herself so we decided to write this little foreboding introduction track Into The… with her angel-like voice providing a stark contrast to the harsh riffs and vocals in Neverwhere, the track that succeeds her song.

BMS: I see. And do you guys have any new PatriarcH material in store for us?

Luc: We’re working hard on new stuff since we don’t want to wait another eight years to bring out a new album as was the case between the albums Mankind = The Virus and Rage Of Gods. Released in 2008 and 2016 respectively.
Freddy: The good thing is that we now have a much more stable lineup. No longer do we need to waste time searching for and rehearsing with new people. PatriarcH is now standing stronger than ever!

BMS: I’m very pleased to hear that. So, what do you guys do aside from jamming as PatriarcH?

Kevin: I’m a true gourmet. I love to go out and have a good drink and an equally good meal. As you can see by the size and shape of my perfectly trained abs! Ha, ha!

BMS: Yeah, very impressive! Although I can’t complain about my own abdominal muscles either!

Freddy: I enjoy watching my sons Ruben and Frederick as they are rally drivers.  They participate in the Legend Boucle à Bastogne rally on a yearly basis.
Luc: I like doing sports. It comes in handy because drumming PatriarcH songs is a true endurance test.
Stijn: My main hobby is drawing, shouldn’t come as no surprise since I’ve already told you about my love for the visual arts. I also work as a part-time graphics designer. And other than that, I spend time with my wife and my three year old kid.
Tweeva: One of my hobbies is programming. Yes, I’m a true IT nerd. Ha, ha! Although, like Stijn, I’m also a family man.

BMS: Now, Tweeva, before we began you said there was one question you hoped I wouldn’t ask. But now I will! How did you get your nickname?

BMS: Very interesting. So, it there anything else you guys want to add?

Freddy: We’ve had a great time playing here and getting shredded by you. Hopefully we’ll meet again soon.
Kevin: Don’t forget to support the underground, folks!

BMS: Damn sure we will!

PatriarcH - Born Without A Face