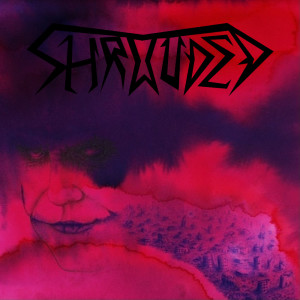 In October 2015 my buddy Jens and his band Shrouded released their first EP. Unfortunately, the band seemingly had no gigs planned to promote their work. At least, I did not find any Shrouded gigs in my Facebook news feed. But after the conversation I had with the band on February 12, 2016 things made a lot more sense.

So that day Jens brought the other guys from the band to youth bar De Muze for an interview dealing with their EP, the band’s troublesome search for talented and motivated people and warming me up for their upcoming shows and freshly written songs. And yes, I’ve got to say this: Shrouded gets Shredded!

All pictures (except for the final pic) made by Ruben Brusselmans during Shrouded’s EP release party (April 23, 2016) in youth bar De Muze, Zottegem.

BMS: Since you’re a young band, I’ll get the ball rolling with a cheesy question. How did Shrouded got started?

Jens: Eddy and I were high school classmates and during our school’s afternoon breaks you could attend guitar lessons. A drum set was also available during those sessions. I play drums, Eddy plays guitar, so we decided to jam together and we had good fun so we founded a band that eventually became Shrouded. We also played when our school was holding an open day. Eddy’s brother Thomas came over to see us playing and suddenly he began singing to our music. We were impressed with his vocals and we asked him to join us.

Thomas: I discovered that I could add much volume to my voice, I’m a huge soccer fan and when I’m attending a match people could hear me shouting from the other side of the field! I also love singing while driving. I was surprised when my brother here asked me to sing in his band Contrary to him and Jens, I had no musical affinity at all! Furthermore, I had to do my first tryout without a microphone, so I had to yell through the other guys’ instruments just to make my vocals stand out.

Thomas: Another thing that initially made me hesitant to join was my age. I’m 28 years old while the others are between 20 and 22 years old. But our former band member Michiel, who left the band shortly after our first EP was recorded, was of my age and that made me more confident to get it on. Now I see myself as a sort of father figure to the band, trying to keep all that young brutality in control.

BMS: Speaking of the EP, share some of the experiences you had during its production.

Jens: We produced the EP in two days and I had the time of my life!
Eddy: It was a weekend during which we made sure that everything went according to plan. Both we and our equipment were in tip-top shape. It was such a touching moment to finally see all that hard work pay off and put some of our songs on record!

Arno: I was stressed mainly because I’ve only recently began playing bass. I needed quite a few Duvel beers to get myself in the mood to play. But overall, it was an enjoyable experience!
Thomas: Arno here is our third bassist since Shrouded was founded. We had much trouble finding a capable bassist (and people rightfully criticized us for that) but we now finally have a bassist who’s motivated enough to get the job done!

BMS: Yes, but now Arno isn’t the newest guy in the team. Victor, tell me how you ended up replacing Michiel on rhythm guitar?

Victor: I met Arno on Facebook and I gave him a friends request when I had noticed we shared a mutual love for metal. One day Arno sent a message that his band was looking for a new rhythm guitarist. I auditioned for the role and they approved.
Eddy: I immediately noticed that Victor has plenty of potential so I offered him the job right after he finished playing.
Victor: And I’m honored to be here! Eddy: The destroyed city refers to Burning Alive, which deals with a nuclear war. The clown face on the left represents the evil thoughts we all have in our souls. Thoughts like anger, impulsiveness and lust for power and wealth that keep lurking inside the dark corners of your mind, watching you and trying to control you. The clouds in the background are a simple reference to our band’s name.

BMS: When I first heard the name Shrouded I thought you were some kind of dreary black metal band rather than the more energetic band that you are. How did you get that name?

Jens: We nearly broke our heads in trying to come up with a name neither of us hated. The song Creatures, which is included in the EP, was one of the earliest songs we’ve written for the band. It starts with the phrase “shrouded in disguise.” We found the word shrouded to be catchy and so we took that as our band’s name. BMS: Great! What are your plans for the future?


Jens: We want to do as many gigs as possible.
Thomas: We did suffer a big setback when Michiel decided to leave the band almost immediately after we had finished creating our EP. Therefore we had to cancel a gig in Roeselare that Jens had planned for us. Now, we first are going to give Victor some more time to practice before we go out playing shows. Thanks to the songwriting machine that is my brother Eddy, we now have about fourteen songs in our catalogue so that’s enough to fill an entire concert.

BMS: Eddy, tell me something about the new tracks.

Eddy: One of my favorites among the new songs is No Cure for Death. It’s about a doctor capable of healing virtually every disease known to man. However, he couldn’t save his wife from dying from her illness and that inability to save his loved one drives him insane! He eventually finds a way to bring her back from the dead but he discovers she has become a monstrous caricature of her former self.

BMS: I’m looking forward to hear that song as well as the others you’ve got prepped up. I had a lot of fun reviewing your EP and can’t wait to hear more from you. Now, what are your other individual activities aside from Shrouded? I’ll start with you, Victor!

Victor: I’m studying to get a degree in business engineering. It isn’t easy to combine my studies with Shrouded but it works.

BMS: I’m impressed. A cousin of mine tried his hand at getting a degree in civil engineering but the course books he had to study were massive! He eventually quit after two years. I have a bachelor degree in Office Management.

Victor: I also play in another band called Observing Oblivion. That band is still in its very early stages so there isn’t much I can tell about that at the moment. In addition to studies and music I practice kickboxing but my main priorities are getting my degree and playing music.

BMS: What do you do for a living, Thomas?

Thomas: I have a bioengineering degree and I work as a scientist focusing on turning insects into cattle fodder. I’ve tried eating such insects myself and they are high on nutrients, they taste quite neutral but they're better served with spice and herbs. I also play in a local soccer team.
Arno: I love reading books and watching nature documentaries. Jens and I are studying to become audio technicians.
Jens: That’s right. I also spend a lot of time improving my drumming skills and from time to time I play guitar. I also love playing 2D video games, especially games with deep and intriguing storylines. BMS: I see. I personally love old-school shooter games like DOOM, Quake and Duke Nukem 3D. I don’t care much about a story. Action is what it’s all about for me. Now, Eddy, what are your other activities?

Eddy: I’m studying to obtain my degree in electro mechanics. I’m fascinated with machinery and automated processes. In addition to guitars I play violin and I love video games like Hearthstone and League of Legends. I don’t play shooters myself because they make me so angry that I throw my mouse against the wall!

BMS: I did get such nerd rage back when I frequently played Street Fighter IV online and got my ass kicked by fuckers who used cheap tactics.

BMS: Do you guys have anything else to add?

Eddy: I’ve got nothing more to tell you. But Jens might have something more to say.
Jens: We dare to dream. At the moment, our main goal is to get a gig outside of Belgium. We keep practicing and improving and we have a ton of fun and laughter when we’re playing as Shrouded.
Thomas: I read your review of our EP and I’m pleased with it, but you said the EP’s length was a bit too short.


BMS: Yes, most of the EPs I’ve encountered thus far have at least four tracks. These three tracks were very enjoyable but I wanted more!

Thomas: By the time we started recording the EP we took a look at our existing catalogue and decided to only record our best songs. Looking back we could’ve added a fourth track to the EP, but we’re still very happy with the final result!

Jens: Another reason why we only included three tracks was because Arno had just joined Shrouded. We didn’t want to postpone our EP’s production and decided he should first master the three tracks we wanted to have on the disc. Money was also an issue for us, since recording a longer EP would’ve been too expensive for us. Quality above quantity was our main priority.

BMS: Victor, anything else to add?

Victor: Are you going to attend one of our gigs?

BMS: I look forward to it!

Arno: I could use a beer!

BMS: Well, folks, drinks are on me! Thanks for the conversation!