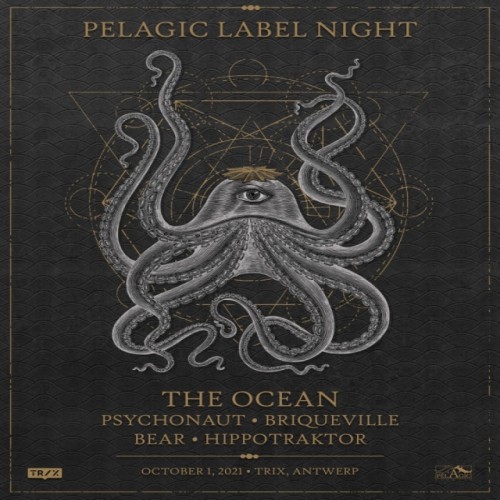 Review written by Corin Geypen. Pictures by Stijn Verbruggen and taken from the Trix’s official Facebook page.
Pelagic Records is a relatively young label, but they can already boast an impressive line-up of bands. Born originally as a means for progressive metal band The Ocean to release their own work, it has become a source of high quality (metal) bands from all over Europe. So when they decided to present a selection of their finest, my husband and I were eager to attend. 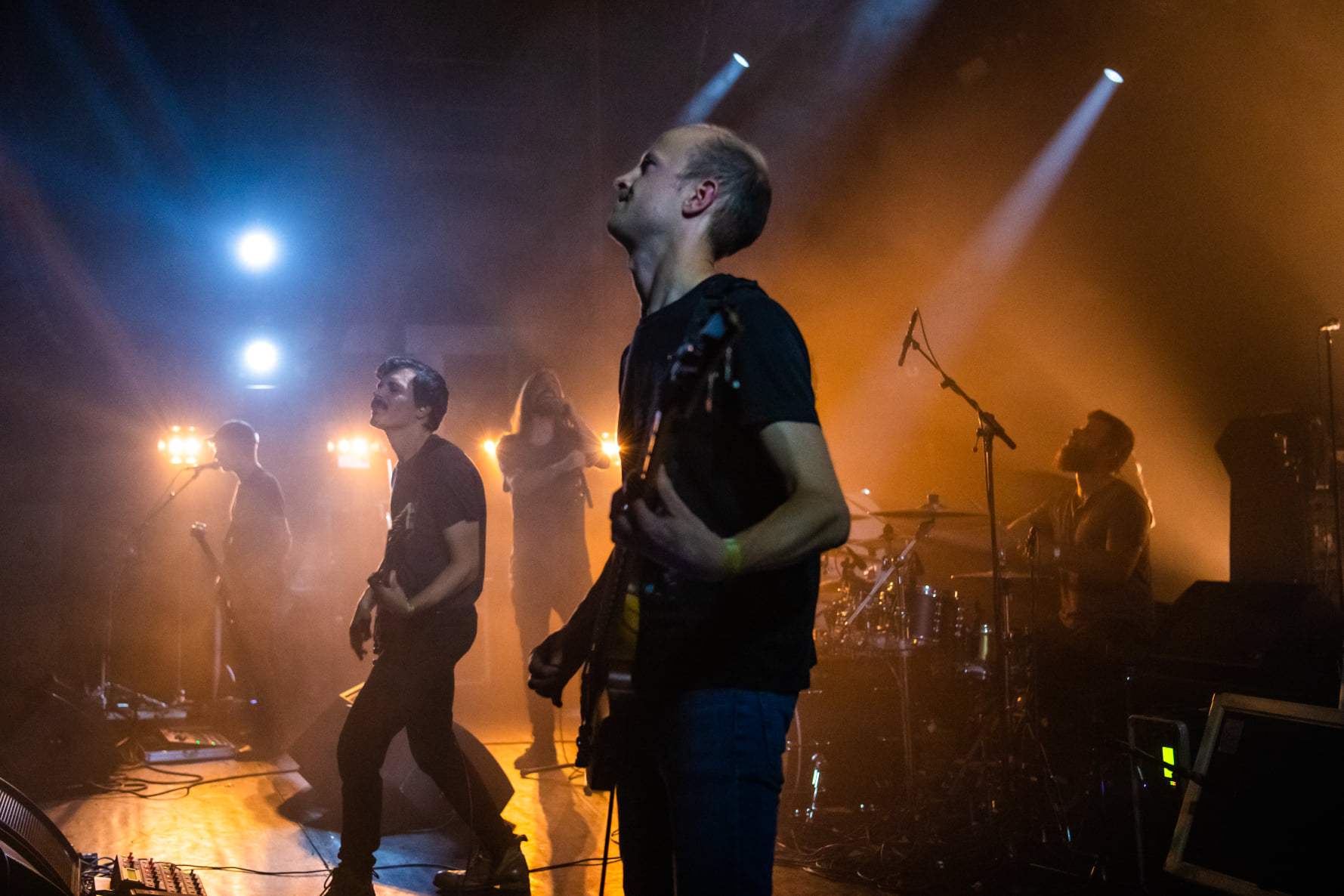 Traffic did not treat us kindly and, unfortunately, we were too late to catch Hippotraktor. We look forward to catching them at Samhain, though! 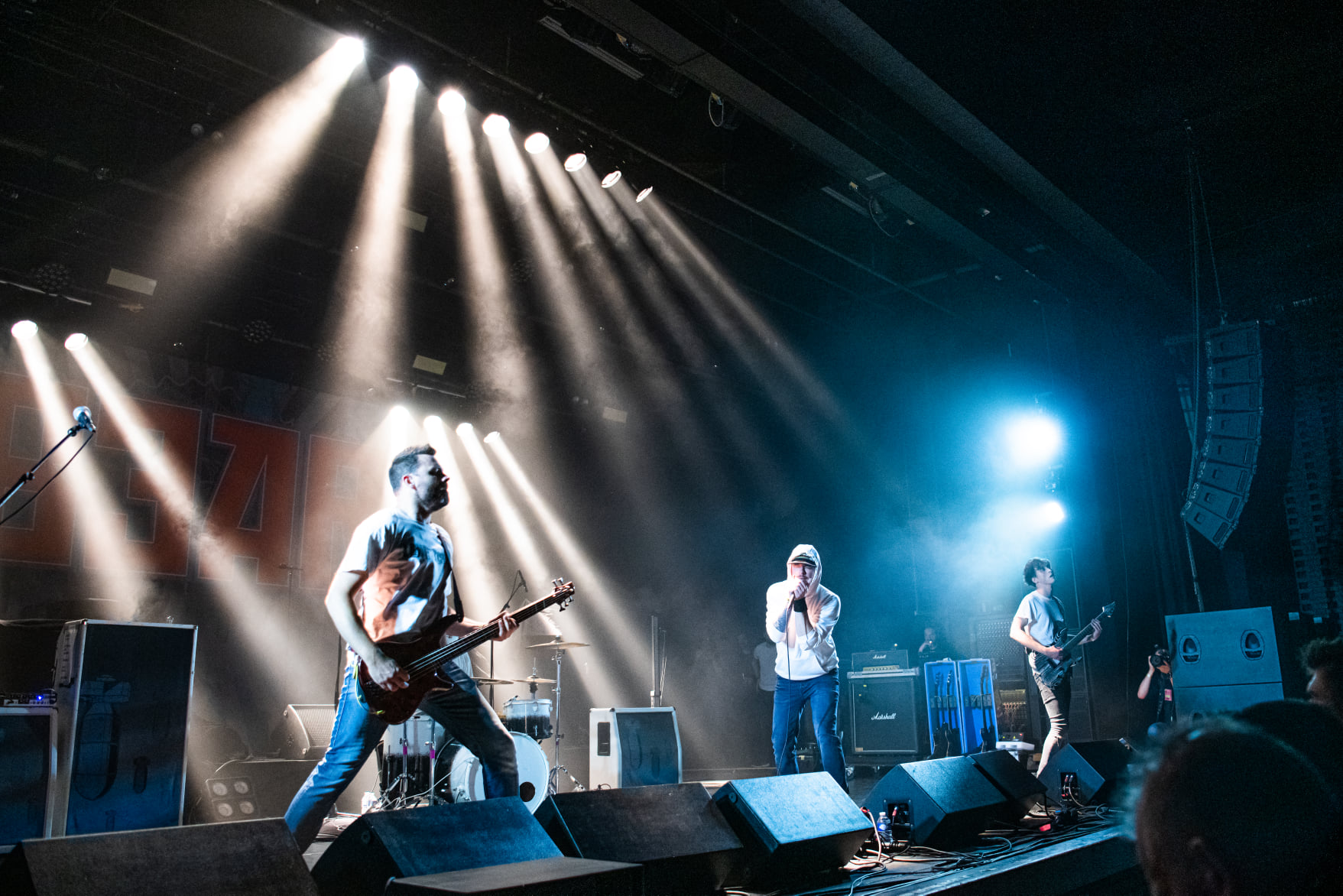 We arrived just in time to catch metal whirlwind Bear. As always, these hyperactive beasts are all over the stage, with energetic low riffs and punishing drums driving the music into your brain with a sledgehammer. Vocalist Maarten urges the audience to get fucking moving and not too surprisingly, they do. I find myself amazed at the amount of noise coming from possibly the tiniest drum kit I’ve ever seen for a metal band, manned by one of the largest drummers. I also noted the lack of a second guitarist. But clearly, Bear doesn’t need any of that to create a massive wall of sound. Latest album “Propaganda” is a pretty heavy political commentary and the guys are definitely angry and frustrated about the state of the world. For their final song they chant “Wreck everything” and literally proceed to do just that. And after 35 minutes of pure raging violence, the Bear was finally sated. 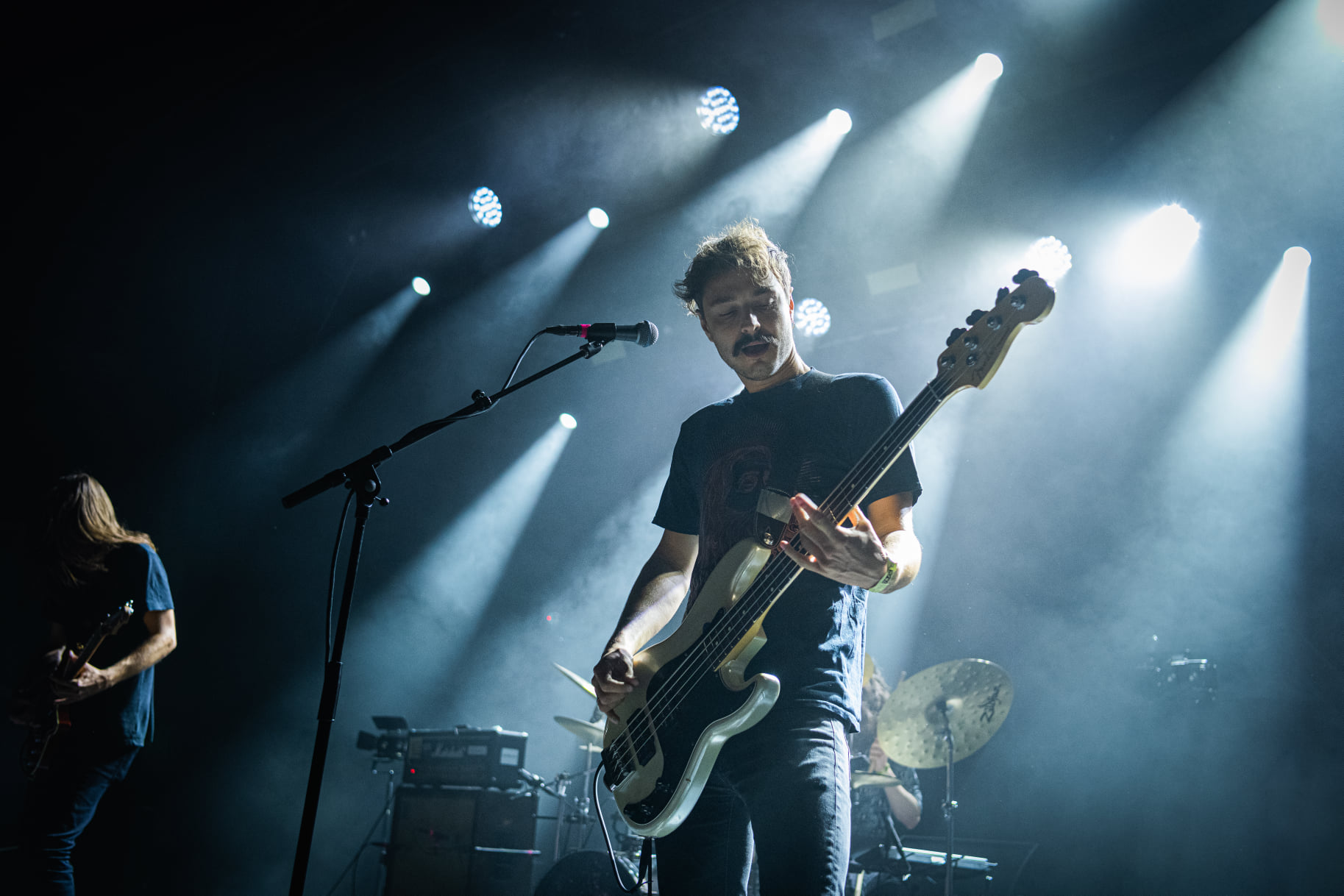 In comparison, Psychonaut was almost subdued. That’s not to say the band didn’t bring energy and smooth riffs to the fore. They were banging their heads, interacting with the crowd and playing their hearts out. I was just a little bummed that all I could hear was bass and snare. It got so bad we actually went back to the foyer, where we were at least able to distinguish the different instruments. The audience wasn’t bothered by that at all, though, the philosophical three-piece band was a clear favorite and they cheered and chanted along with almost every song. I will have to give them another try next time and hope the PA does a better job at balancing the instruments. 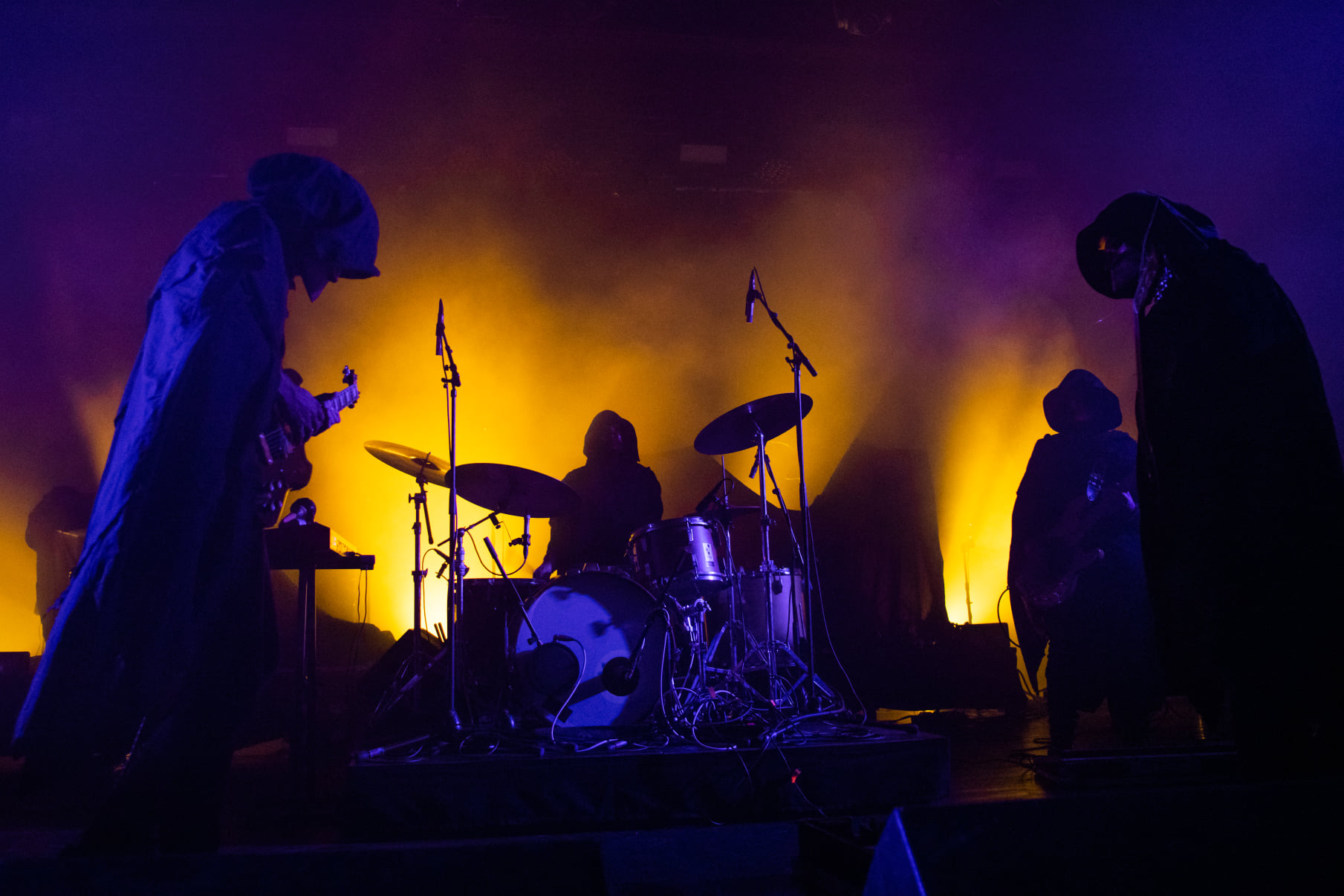 Next up was Briqueville. I’ll be honest: I laughed at their costumes. They were just so comical to me, reminding me of the old Robin Hood cartoon where Robin dressed up as a stork for an archery competition. I guess I’m just a more straight-forward kind of girl. I’m there for the music, not the drama. That said, the band was a-ma-zing. I really enjoyed their soundscapes and near-instrumental setlist. I’m not usually into instrumental music or this ritualistic portrayal of the genre, but Briqueville would not be denied. They were just that good. I loved that they were clearly enjoying themselves, too, underneath those capes and masks. Kind of like happy storks, but don’t tell them I said that. I bought a shirt and a CD, which I hardly ever do, so high praise indeed. Keep it up, guys! 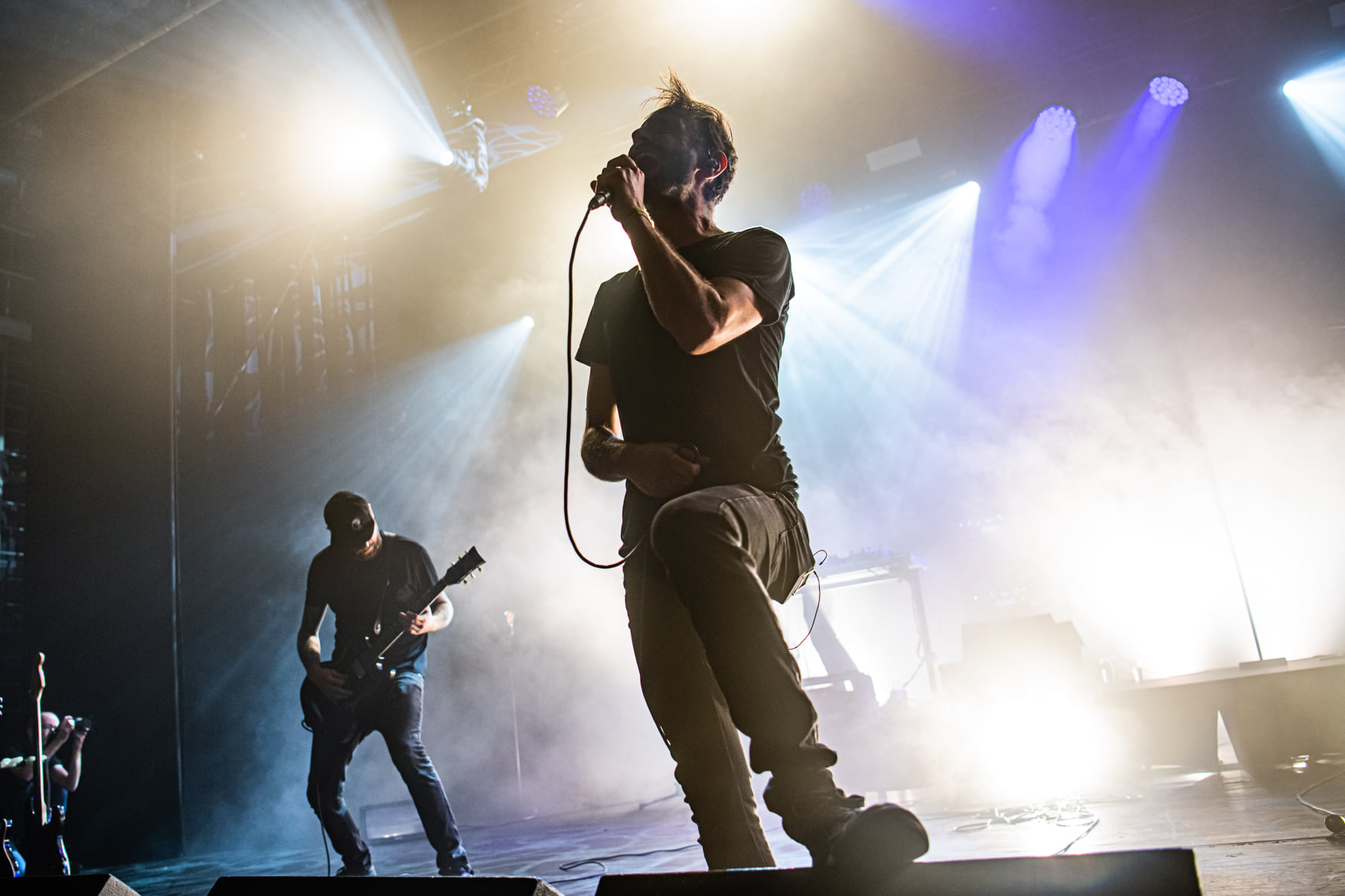 And then it was time for main act The Ocean. I’ve seen them live a few times and they never disappoint. Tonight was another showcase of fine metal riffs, groovy bass and drum lines and kick-ass vocals. I was glad to see most of the line-up had remained unchanged, as the band was known for its frequent changes in the past. Having played together so much, there was more cohesion and time for fun. At some point, the vocalist played keys, the keyboardist was behind the drums and the drummer did some vocals. You can’t do that when you’re not fully settled as a band. It was great to see. Loïc’s voice is still impressive. I love how smoothly he switches from clean to grunt to scream. And he’s still as energetic and bouncy as ever. The rest of the band was really into their music, if a bit more static. But there’s no denying they are worthy of their headliner name. Great show!

{All-in-all, I had a great time. It was good to see Bear again, I’ve seen their vocalist many times over the years – I first saw him with Gazzoleen – and it’s cool to see how he’s evolved. The guys from Psychonaut were approachable and pleasant at the merch booth, which was nice to see. Briqueville was my personal discovery of the night, although I’m still not a fan of the costumes, haha. And The Ocean, as always, brilliant. I believe the phrase is: a night made of win. On to the next!
}