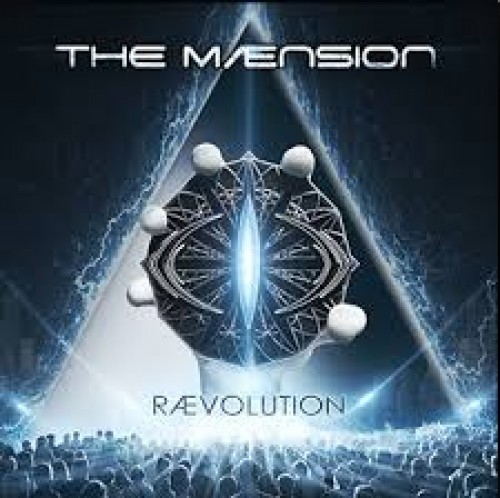 Review written by Glenn Van Bockstaele.
American alternative metal band The MÆnsion was formed in Hollywood, CA in 2007 and released their debut EP “Introspection” in 2014. They followed it up with their first album “Ævolution” a year later. Fast-forward to today and their second full release “RÆvolution” has finally arrived here in the Benelux! The album is released through LA-based record label Take This Trip To Mars Records and NJ-based promotion Knife Fight Media. The Benelux promotional part is handled by our buddies from Hard Life Promotion and that’s how we got hold of this little metallic blue gem!
“RÆvolution” starts off with “Army Of The People,” an epic and catchy anthem that will make you whisper “Power to us” before you reach the end of your first listening session. The second track “Say It” features more electronic sound effects along with frantic drum beats and sharp guitar riffs. A significantly heavier track than the opening tune, but still with a similar anthem feel. Another heavy hitter is the third track “The Engineer,” although it didn’t feel as memorable compared to the first two songs in my opinion. On the other hand, track 4, “Elation,” did deliver the goose bumps again, particularly during the chorus and the guitar solos in the middle part, majestic!
The fifth song, “Imagine Tomorrow,” is a more gentle tune but with yet another chorus that will instantly burn itself onto your brain! On to “Master/Slave,” a very electro-focused tune further supported by the band’s own arsenal of heavy metal instruments, a very different kind of song compared to the other tracks on the album but still having that similar MÆnsion feel. Track seven, “Happy,” is another slow song but unlike what its title suggests, this tune doesn’t provoke happiness but rather gloom and doom, thanks in part to the moody piano tunes featured on this track. Very intimate and relaxing!
Things get more intense again with the eighth track, “High,” with some impressive guitar work from Mark and Skye MÆnsion. The album’s penultimate track, “Stand Your Ground,” once again features electronic tunes played in tandem with the more traditional metal stuff for one final hectic song and finally the album seemingly cools off with “One Way Ticket To Mars.” The electronic tunes get replaced by acoustic guitar and tribal drumming with occasional outbursts of alternative metal power!
All things considered, The MÆnsion have a lot going for them. They successfully manage to mix a heavy, Alice In Chains like sound with electronic effects that gives the entire album a retro videogame feel at times. Most songs on “RÆvolution” sound very catchy and start off gently before exploding into climactic choruses! Another major strength of this band lies in vocalist Mark MÆnsion’s delivery. His voice is commanding, emotional and full of raw energy. He calls you in and encourages you to join his band’s cause. And with the very engaging lyrics he provides, it’s not hard to do exactly that! Don’t listen to the MÆnsion for overly complex or technical songs, listen to them if you seek motivation to reach for the stars! Higher, higher! Here’s the music video for Imagine Tomorrow!
90/100