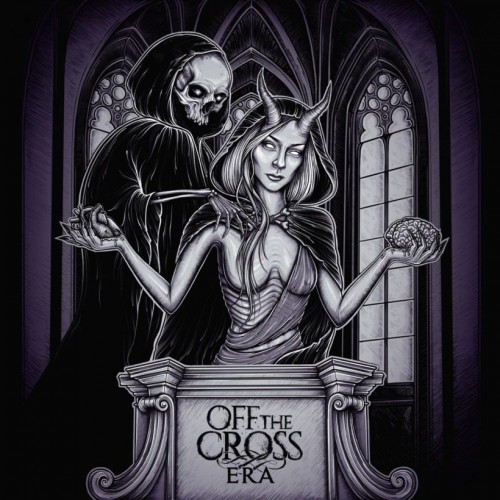 Modern metal band Off The Cross was formed in 2016 in Merksem, Belgium and one year later they brought out their well-received debut album “Divided Kingdom.” Despite the band’s young lifespan, Off The Cross has already played on festivals like Graspop Metal Meeting, Groezrock and Epic Metal Fest as well as sharing stages with the likes of Epica, Municipal Waste and fellow countrymen Aborted. Not resting on their laurels, Off The Cross is now bringing us an EP simply called “Era.” The EP is an independent release and was sent to us by All Noir PR, Booking and Management. Thanks a lot! Now let’s check this one out!

The “Era” EP begins with “The Goddess,” a song that, alongside a modern metal sound, features elements from symphonic and progressive metal with choir chants, beautifully melodic and heavy riffs and guest vocals from Marcela Bovio (known from her work with acts like MaYan, Stream of Passion and Ayreon). The EP then continues with “The Silence.” A more progressive sounding track that reminds me of a mixture between old-school and new-school Opeth. Vocalist Steven smoothly transitions between clean vocals and grunts and the song mixes heavy and gentle parts while still maintaining a huge sense of melody and overall grandeur as well as wrapping up with an epic guitar solo. The EP’s third track, “the Mist,” is a darker tune that includes custom percussion, violin, piano and even ending with saxophone, which gives this song a jazzy finale. And finally there’s “The Saviour” a track with a dreamy piano melody, choir singing and Off The Cross’s heavy riffs and grunts making frequent appearances as the song builds up to an explosive climax!

Off The Cross’s style isn’t easy to put into a single subgenre. They combine elements of groove, symphonic, progressive, ambient music, orchestra and even jazz into one smooth, balanced package that feels much grander and larger-than-life than you would usually expect from an EP. The more I listened to “Era,” the more I discovered about this band’s unique sound and feel. The devil’s in the details and there’s a lot of such fine details to enjoy and uncover here! I’m very curious to hear what these young folks from the Antwerp region have in store for us in the near future! Here below is the music video for the EP’s opener, “The Godess.”