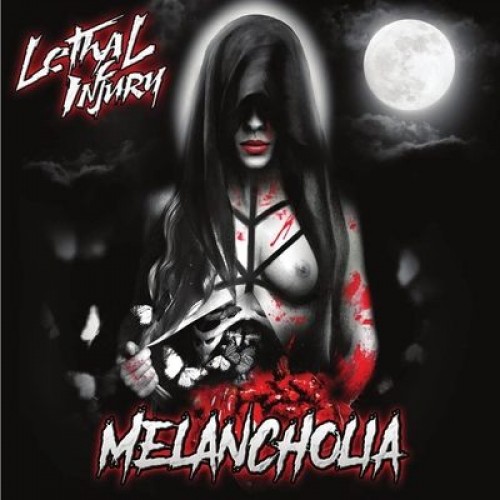 I acquired my first taste of Lethal Injury in early 2015 when I listened to their freshly released demo tracks on YouTube. Although these first songs didn’t leave a big impression on me, I did feel this young band had some true potential. Especially after I heard they had the opportunity to open up for fucking Anthrax later that year! Fast-forward to today and now it’s time to shred Lethal Injury’s debut album!

Melancholia is the first release of the Ostend-based thrash metal act Lethal Injury, formed in spring 2015. The album is released through Italian record label Wormhole Death, a sublabel of Aural Music. After a short instrumental consisting of a foreboding guitar riff and a marching drum beat, Lethal Injury goes on the warpath with a sound that, as first sight, has many similarities to 1980s thrash bands. In particular Exodus. This point is further driven home by Rambo’s shrieking vocals that sound familiar to Steve “Zetro” Souza’s chords. Add to that the great technical guitar riffs from Solar and Jonjo and it becomes clear that Lethal Injury holds classic thrash metal close to their hearts.
However, the band isn’t satisfied with just being a solid homage to Bay Area thrash. Lethal Injury also incorporates many characteristics from death metal (Melancholia’s title track), black metal (“Veiled Woman of the Black”), classic heavy metal (“The Downward Spiral”) and even some metalcore (“Mothman”). Those various elements are nicely put before, in between or after the more traditional thrash metal sections, giving every song a unique personality as well as adding a sense of unpredictability to the album as a whole. There’s a lot of headbanging fun to be found here and not just for thrashers!

A sexy yet grotesque image functions as Melancholia’s front cover. A topless, black-veiled woman tearing open her own stomach and letting her guts drop towards the ground. Yet for all its gruesomeness, the cover art is highly detailed and artistic. Black-and-white with red being the only additional color, highlighting the girl’s red lips, blood and intestines. It reminds me a lot of Frank Miller’s Sin City comics. And the lady’s “outfit” would make for a great Halloween costume, tits included!

[THE SHARPEST SHREDS AND BLUNTEST BLADES]

The album’s fifth track, “Suicidal Call,” is a delicious pound of thrash metal flesh. Catchy chorus and melody, awesome guitar solo-work and the old-school Bay Area thrash vibe. And all introduced by dialogue out of a famous scene from Stanley Kubrick’s war classic Full Metal Jacket! Yup, this track sounds off like it’s got a pair! And there’s the final track, “Veiled Woman of the Black.” Starting as a Slayer-inspired track with some death metal parts, the track eventually and suddenly transforms into an intimidating black metal tune with all the grinding riffs, blast beats and coarse vocals you can expect from this infamous subgenre! Until finally the song cools down into the same menacing guitar melody and drum march from the very beginning of the album thus bringing the entire release full circle! An epic and original finale!
As for the weakest track on the album, that “privilege” goes to the song “Denounce.” This track is a rerecorded version of the same song featured on Lethal Injury’s demo EP from 2015. It’s an uninspired thrash metal tune and because it lacks the musical variety that’s so prominent on this album this track sticks out like a sore thumb. Judged on its own merits, “Denounce” isn’t a horrible song. Hell, it was this track in particular that sparked my interest in this Ostend band but this song is clear proof of how Lethal Injury’s songwriting skills have evolved in the past three years. So guys, I’m giving you…

8 Black Veil Brides out of 10. Lethal Injury’s Melancholia is one sweet package of old-school thrash metal infused with plenty of other influences to make these guys better stand out compared to other young, similar sounding bands. The whole is better than the sum of its parts, and I look forward to hearing more of this sound that I prefer to call, Ostend Bay thrash! Here’s Melancholia’s title track!