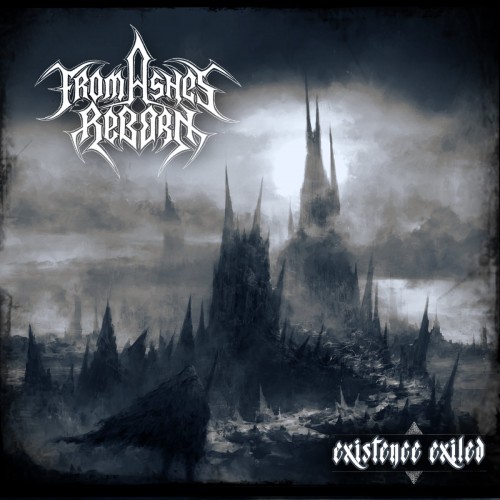 Review written by Glenn Van Bockstaele.
I was introduced to From Ashes Reborn by German promoter Metalmessage. Existence Exiled is the debut release from this young German death metal band formed in 2017. The album is an independent release and produced by Markus Stuck (known for his work with bands like Empyrium and The Vision Bleak). After “The Onerous Truth,” a brief intro of piano and violin, the band unleashes their fury with “Fight For The Light” and I instantly felt a sense of Amon Amarth coming over me because of the fast and melodic beats combined with vocalist Ronni grunting in a similar style to Johan Hegg. Yes! This guy has no trouble in covering his German accent and instead goes all Scandinavian on your ass!
This epic death metal pounding continues when the third track, “Follow the Rising” enters the sonic stage and it wraps itself up with an awesome guitar solo! The fourth track, “The Essence of Emptiness” is slower and more atmospheric with an occasional speedup and shows off the band’s influences from acts like Insomnium and Amon Amarth even more clearly! And then comes the fifth track “Infected” and it’s an absolute headbanger! Pounding blast beats, harsh grunts and epic melodies! Melodic death metal at its finest! Then comes the title track and it relishes in its dark, combative atmosphere! The riffs of “Homicidal Rampage,” the album’s penultimate track, are catchy and maintain the dark but heroic feel that is present throughout the entire album! And finally the album cools down with a sweet 3-minute instrumental “The Splendid Path,” showcasing magnificent guitar work as the album slowly fades away.
Overall, this young band from Wittlich (Rhineland-Palatinate, West-Germany) pays an honest and beautiful tribute to the Scandinavian death metal gods! The songs, like the artwork, have a dark fantasy feel and the band smoothly switches between classic death metal tunes and dreary, almost doom metal like intermissions. There are times of brooding and times of lashing out in pure Teutonic rage against whatever foe the band is fighting! While it’s 32-minute runtime is a bit too short for my tastes, I can warmly recommend From Ashes Reborn’s debut album! It’s a hidden melodic death metal gem that will please a lot melodic metalheads out there! Especially those who dig the likes of Amon Amarth and Insomnium! Here’s the album’s second track, “Fight For The Light!”
80/100